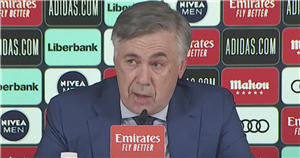 New Real Madrid manager Carlo Ancelotti has confirmed Gareth Bale will return from his loan spell at Tottenham and become an important member of his squad next season.

Ancelotti is back at the Bernabeu for a second spell as Los Blancos boss six years after being sacked by club president Florentino Perez.

The Italian made the shock decision to leave Everton and rejoin Real on Monday following Zinedine Zidane's departure, and there are a number of problems he must now address.

One of them comes in the shape of Bale, whose Madrid future appeared all but over with Zidane at the helm.

However, Bale recently cast doubt over his future in football after twice declining the opportunity to deny he could retire after playing for Wales at Euro 2020 this summer.

“Obviously there’s been a lot of things written about whether I’m doing this and doing that,” he said.

“For me, the main thing is I don’t want to say anything that’s going to cause more chaos or more drama or cause a distraction."

But Ancelotti has quashed any rumours that Bale could call time on his career, instead suggesting he will play a key role in his Real squad next season.

The 61-year-old said in a press conference after being unveiled as Madrid boss for a second time: "Gareth has not played much in the PL, but he scored lots of goals, was very effective in recent games when he had chance to play.

"He is coming back, I know him very well.

"He will be motivated to play better and have a great season, no doubt."

Ancelotti also provided a boost for Eden Hazard, whose Madrid future has also become precarious in recent months following another disappointing season at the Bernabeu.

"Hazard is a top player," he said. "He has had problems and has not realised his potential, but I think he will."