Socceroos legend Tim Cahill has endorsed controversial plans to play the World Cup every two years as FIFA’s charm offensive ramped up in the face of mounting opposition from clubs, leagues and confederations.

Cahill was among 18 ex-players who gathered for a two-day summit in Doha with FIFA’s chief of global development Arsene Wenger to discuss the radical changes being pushed by the former Arsenal manager and FIFA president Gianni Infantino. 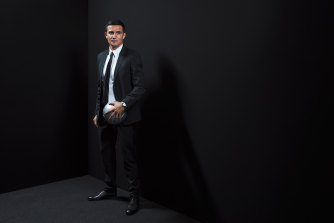 Tim Cahill is a fan of FIFA’s proposal to play the World Cup every two years.Credit:Getty Images

Fans around the world have widely rejected the idea of doubling the frequency of the World Cup, which has been played every four years since 1930, as needless largesse on FIFA’s part that would ruin long-standing tradition and cheapen the value of the sport’s crown jewel.

UEFA is also dead against it, while 13 of Europe’s top club competitions – including the Premier League, La Liga, Serie A and Ligue 1 – have also expressed their unanimous opposition.

But FIFA appears to be gearing up for a brutal political battle over the coming weeks and months, leaning on the star power of Cahill and other retired favourites in a bid to win public support for Wenger and Infantino’s reform blueprint.

The 41-year-old, along with Brazilian icon Ronaldo and Manchester United great Peter Schmeichel, was made available to global media late on Thursday as Wenger went public for the first time with FIFA’s biennial World Cup plans.

Tied to them is a mooted restructure of the international calendar, which would see a reduction to just one or two FIFA windows per season to reduce interruption of club football – but they would be close to a month in length, theoretically improving cohesion and consistency within national teams.

Unsurprisingly, all three ex-players came out in favour.

“I feel now after the presentation, with the transparency of what Arsene Wenger [and] FIFA have put together, thinking about the future, when you have 166 countries asking for the feasibility [study], it’s really important that everyone can do their due diligence and add some context.” 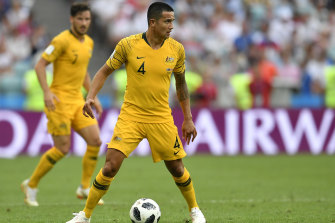 Cahill said he felt the changes would ease the physical burden on players by reducing cross-continental travel, and that the money raised by the extra tournaments could be spent on improving developing football countries.

“I’m Australian, I played in four World Cups … three of those [we qualified through] Asia. It’s really , really difficult,” he said.

“If you can take into consideration a national team being together for a month, being able to train, be with fans, play games, prepare properly, qualify. It takes Australia three years to qualify for a World Cup whereas in Europe it takes one year.

“There’s so many aspects that needs more context, more information. We need to digest it and the nice thing here is having an open conversation.”

Cahill now works in Qatar, where he is the chief sports officer at the Aspire Sports Academy. His close ties to the oil-rich state have rankled some Australian fans, who criticised him last year for becoming an official ambassador for the Qatar 2022 World Cup due to the human rights abuses connected to stadium construction.

He, Ronaldo and Schmeichel are part of FIFA’s Legends program, which makes them official ambassadors of the world governing body and obvious public faces for their current “consultation” process.

Asked if there were any dissenters within the group of ex-players in Doha who didn’t like FIFA’s biennial World Cup plans, Danish legend Schmeichel said: “I don’t think anyone disagreed on the frequency of the World Cup. Every two years, I think everyone was on board with that.”

“I come from a small country, five million people. We haven’t got any guarantees of qualifying in a tough environment in Europe for the World Cups that at the moment are every four years. I played for my national team for 14 years but only managed to qualify for one World Cup, and would certainly jump at the chance to qualify every two years.”

Ronaldo dismissed arguments that playing the World Cup more often would make it less prestigious, saying that was not the case for annual events like the UEFA Champions League and tennis’ four grand slam tournaments.

But the most obvious benefit for FIFA was not discussed at all: the financial element. The World Cup is FIFA’s chief money-spinner and, by having twice as many of them, they would hope to not only double their revenue but do so at the expense of their institutional rivals like UEFA.

Football Australia has refused to confirm if it was among the 166 nations that voted in favour of a feasibility study into the change and is said to be waiting on more information before forming a public view. Only four minnow countries from Asia have outed themselves so far. But FA would stand to benefit from more frequent World Cups, particularly as they prepare to enter the race to host the men’s event in 2034.

A decision will be made in December by FIFA’s congress, with any approved changes to take effect from 2028 onwards.

Sports news, results and expert commentary. Sign up to our Sport newsletter.