Kevin Muscat is on course to become the first Australian to coach in a major continental European league, having agreed to terms to oversee top-tier Belgian club Sint-Truiden. 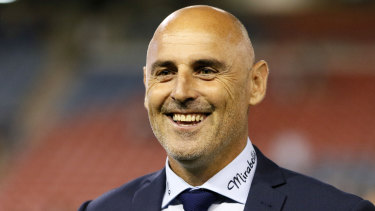 Kevin Muscat is set to move to Belgian club Sint-Truiden.Credit:AAP

The 46-year-old has spent much of the past month in Europe and the United Kingdom hoping to land a coaching position. Sources close to Muscat said he would travel to Belgium later this week to finalise the deal with Sint-Truiden, having agreed to terms.

Sources said Muscat would assume a technical role with the club with a view to becoming their head coach as early as next season once he completes his UEFA Pro Licence. It is unclear whether Muscat will be assuming a coaching advisory or technical director's role in the interim, but sources said he would be involved in their first match of the new year, at home to Kortrijk on January 19.

Sint-Truiden have been without a head coach for the past month after Marc Brys was sacked in late November. The club finished seventh in the Belgian First Division last season and remain a mid-table club thus far this season, entering the winter break in 11th spot.

Sint-Truiden were bought out by Japanese e-commerce company DMM in 2017 and have become a club with a significant focus on Asian football. Not only have they looked towards Muscat, they boast three Japanese players in their squad and a Korean international.

Muscat could be unveiled as early as the end of next week when details of his technical role will become clearer. The fact Australian coaching badges are not recognised in Europe has been a significant impediment for Australians looking to break into European football, with only a select group having reached the dugout in UEFA-sanctioned competitions.

In 2017, Tony Popovic coached Turkish club Karabukspor, located on the Asian side of the Bosphorus, while Ange Postecoglou spent a season with Panachaiki in the Greek third division in 2008.

Former Melbourne City and Adelaide assistant Michael Valkanis is an assistant coach with the Greek national team. Joe Montemurro is perhaps the most successful Australian to have coached in Europe, now in his third season with Arsenal's women's team having earned his coaching badges in Italy.

Meanwhile, Western Sydney Wanderers are set to reject an offer for Keanu Baccus from Danish club Aarhus. The midfielder was a transfer target of the Superliga club who had their sports director in Sydney last week, watching Baccus. Sources close to the club suggest Aarhus submitted a transfer request to sign Baccus in the January transfer window but the Wanderers knocked that back over the weekend.