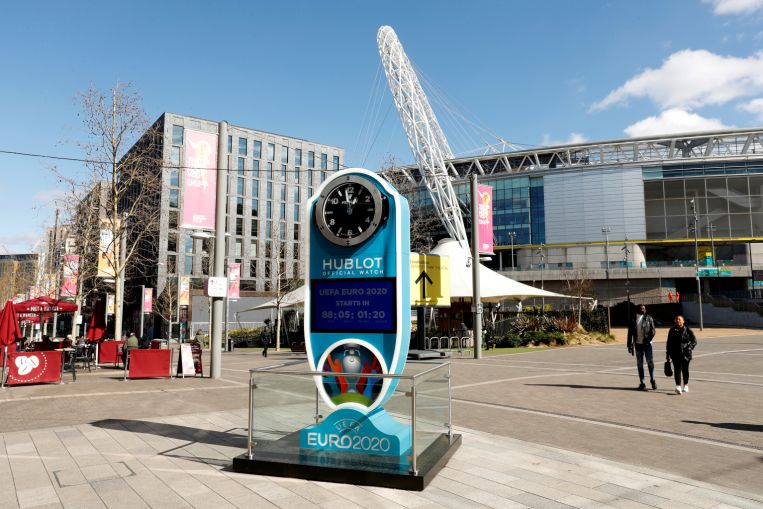 LONDON (AFP) – The UK government is hopeful that fans will be able to return to sports stadiums by the end of May and could offer for Britain to host all of Euro 2020, according to a Sunday Times report.

Culture secretary Oliver Dowden has signalled to Uefa that crowds are expected back in UK stadiums before the rest of Europe, according to the Times, due to substantial progress on coronavirus vaccinations.

That could lead to more games or the entire tournament being played in the UK to mitigate the loss of ticket revenue for Uefa.

Euro 2020, which was postponed for a year due to the Covid-19 pandemic, is still scheduled to take place in 12 cities across the continent from June 11 to July 11.

European football’s governing body has so far publicly insisted it is sticking to the original plan of using all 12 host cities despite the logistical challenges.

However, Uefa is believed to be looking at contingency plans should ongoing restrictions render that plan impossible.

British health secretary Matt Hancock said on Sunday (Feb 21) he was unaware of any offer to host the tournament. Hancock told Sky News: “I haven’t seen anything on that, I understand that that’s not right.”

Wembley is scheduled to host seven Euro 2020 matches, including the semi-finals and final, with Glasgow also hosting four games.

Israel has also offered to host Champions League and Euro 2020 matches if coronavirus restrictions force them to be moved from other countries.

Several Champions League and Europa League matches due to take place in Germany, Spain and Portugal have been moved to neutral venues in recent weeks due to entry restrictions.

As well as London and Glasgow, Euro 2020 games are due to be held in Dublin, Amsterdam, Copenhagen, Saint Petersburg, Bilbao, Munich, Budapest, Baku, Rome and Bucharest.