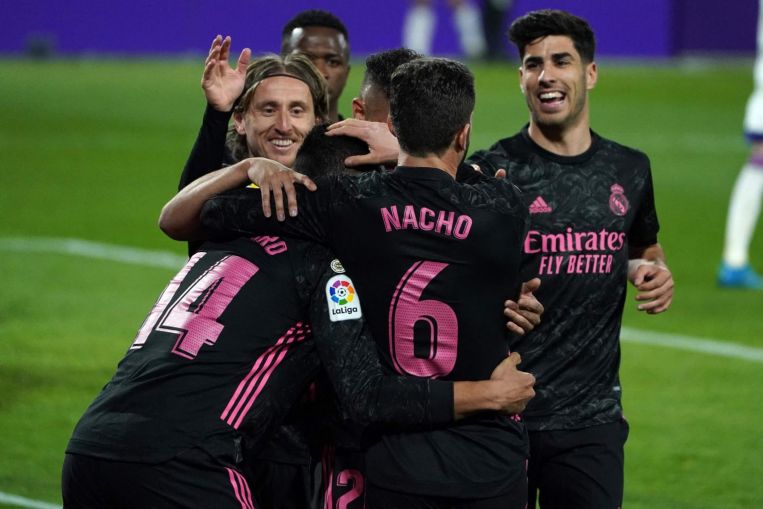 MADRID (AFP) – “Sign him up Florentino,” Real Madrid’s fans wrote on Twitter before Zinedine Zidane was asked if he sent a message to the club’s president Florentino Perez.

Kylian Mbappe had just destroyed Barcelona at Camp Nou and 24 hours later, Erling Haaland did the same to Sevilla at the Ramon Sanchez Pizjuan.

By the time Real Sociedad trailed 4-0 on Thursday (Feb 18) evening to Manchester United, the feeling in Spain became clear: La Liga was in freefall.

Later that night, Granada beat Napoli and Villarreal saw off Salzburg in a competition it should be remembered that was only six months ago won by Sevilla, for the fourth time in seven years.

In fact, a Spanish team has won the Europa League seven times out of the last 11.

Three of those titles belong to Atletico Madrid, who take on Chelsea in the Champions League on Tuesday, after knocking out the English champions Liverpool last season.

Real Madrid face Atalanta, hoping to prevent a third year without winning the tournament, after winning all of the previous three.

If there is a need for perspective – that the speed of the fall is in part due to the heights previously reached – Spain’s dominance in Europe has also been receding for some time.

It perhaps began when Barcelona lost to Roma in 2018, continued with the departures of Neymar and Cristiano Ronaldo, before becoming entrenched, as financial impotence has prevented a revival.

Certainly for Barcelona and Real Madrid, hesitation in refreshing their squads has been punished to the full, the coronavirus pandemic enforcing a year without spending when they arguably needed to spend most.

Real Madrid’s youngsters have yet to blossom, while Barcelona have watched a historic era grow old, leave or retire. Atletico continue to rebuild after their own cluster of iconic departures. Sevilla have endured but Valencia are in a mess.

For most of this century, it has been a question of when, not if, a generational talent moves to Spain but now there are no guarantees.

Mbappe has long been linked with Zidane but, as Lionel Messi has shown, the best players define themselves by Champions League victories and who could say confidently Paris Saint-Germain and Manchester City will not own more of those over the coming years than Barcelona and Real Madrid?

Ronaldo and Neymar left, before Messi tried to and still might. Last summer, City pinched Spain’s most exciting young talent, Ferran Torres, while Atletico were powerless to prevent Thomas Partey even joining Arsenal.

And while Pep Guardiola and Jose Mourinho fronted La Liga’s peak at the end of the last decade, the most charismatic, modern coaches – Jurgen Klopp, Mauricio Pochettino, Thomas Tuchel, Julian Nagelsmann – have plied their trade almost entirely elsewhere ever since.

Along with Guardiola, they have driven the shift towards a more physical, vertical, high-pressing style, that seems to have left Spanish teams behind.

“Barca always have been a team that have gone for lots of players for their technical qualities and not many for their physical qualities,” said Koeman on Saturday.

“You have to have both, to have balance we want the ball, to play from the back and create chances.

“This team have played very well in that way this season but we need a balanced team, that can be physical, defend and do everything else. To defend you have to have legs.”

Beneath it all lies a financial reality, that Spain’s clubs, including the top two, are no longer among the most generous payers of transfer fees or wages.

Despite La Liga’s attempts to internationalise, foreign investors have still flocked not to Spain but to England, lured by the most lucrative television contracts and biggest audiences across the globe.

As Barcelona and Real Madrid shut up shop last summer, Chelsea and Manchester City spent freely, their billionaire owners offering protection from a pandemic that was paralysing clubs almost everywhere else.

La Liga president Javier Tebas said the Premier League’s transfer activity was “excessive” yet while Spain’s more stringent controls on spending may pay dividends in the future, in the present they are also restrictive.

“Financial solvency is very important,” said Tebas. “When the crisis is over, our clubs will be as strong as before.”

If an economic revival is swift, rebuilding will take longer. Mbappe and Haaland would not be joining Europe’s best, they would be catalysts for a recovery.