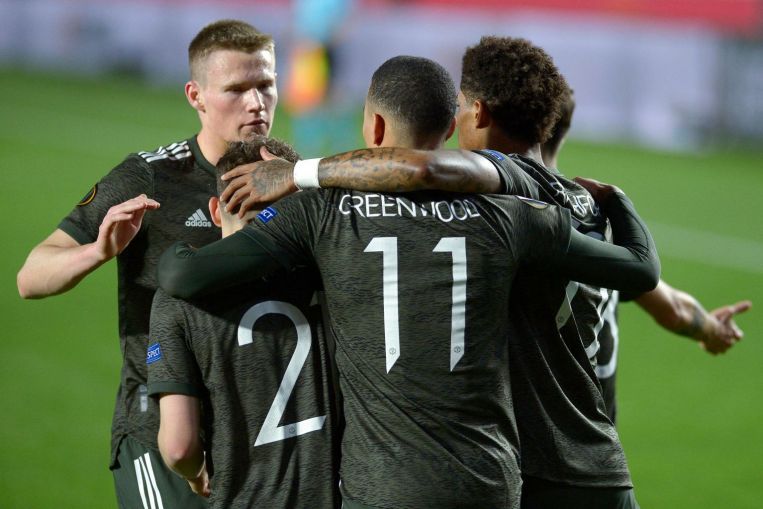 Rashford latched onto a long ball from Victor Lindelof in the first half, the striker injecting one bit of quality into a frantic contest at Los Carmenes before Fernandes made it two in the 90th minute after being elbowed by Yan Eteki.

The result gives United a commanding lead heading into the second leg at Old Trafford, where they should finish the job and book their place in the semi-final to face either Ajax or Roma.

Rashford has now scored eight of United’s 23 goals in this competition.

Granada celebrated their 90-year anniversary on Tuesday and arguably have never played a bigger fixture, a club that has never won a major trophy against one that has claimed 20 Premier League titles and three European Cups.

This is something of a fairytale for the Spanish club that finished 10th in the second division only three years ago before Diego Martinez, arguably La Liga’s brightest up and coming coach, engineered promotion and then qualification for Europe.

Six players in their starting line-up played for Martinez in the second tier and with Los Carmenes empty, Granada even sent all their season ticket holders a personalised ticket as a souvenir to mark the occasion.

For United, the Europa League remains Ole Gunnar Solskjaer’s only realistic hope of a trophy and with a place in the top four all-but guaranteed, he can afford to give it his full attention.

Solskjaer fielded a strong line-up, with Rashford handed a start despite coming off against Brighton on Sunday with a knock. David de Gea was picked in goal for the first time since February.

Granada had Roberto Soldado up front, the 35-year-old striker who endured two disappointing seasons with Tottenham in the Premier League but tasted victory against United in his last appearance for them in 2014, when he came off for a young Harry Kane.

United had to survive a frantic opening period when neither side really settled but Rashford dropped the first bit of real quality into the match just after half an hour.

Lindelof spotted his run in behind but Rashford still had a lot to do, his outstretched foot cushioning the ball brilliantly into his path and giving him a simple finish past Rui Silva.

But United absorbed the pressure and should have scored a second in the second half when Daniel James burst through down the left and slipped in Fernandes, but he was unable to find the finish from the angle.

Fernandes, though, won the penalty, struck down by the arm of Eteki before getting up to take it, a scuffed shot squirming into the bottom corner to put United in sight of the semis.