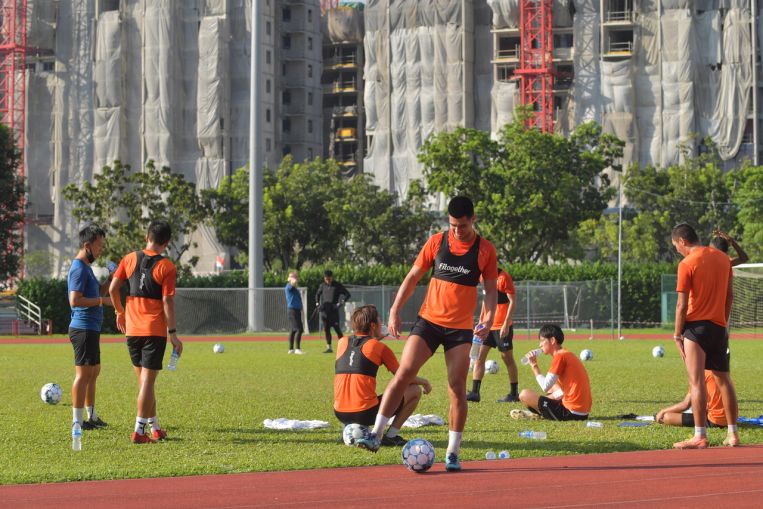 SINGAPORE – “Oh Hougang United, we are the pride of the north-east” is a full blooded chant their supporters belt out during Singapore Premier League (SPL) matches, and they have more reason to cheer as they celebrate a return to the AFC Cup next year.

The top local SPL club will qualify for the AFC Champions League – Asia’s top club competition – while the next two will play in the second-tier AFC Cup.

So with fifth-placed Tanjong Pagar United (17 points from 17 games) some distance behind and with just four SPL matches to spare, unfashionable Hougang are assured of at least a place in next season’s AFC Cup.

This, even before meeting traditional powerhouses Tampines Rovers on Saturday (Sept 11).

Hougang remain the only senior SPL side not to have won any major trophies and this is only their second AFC Cup qualification. They first accomplished the feat in 2019, when they were third. These are also the only two times they have finished in the top half of the local league, a distinct improvement for a club that finished last in 2015 and 2018.

It is no surprise that the Cheetahs’ rise has coincided with a period of stability and continuity compared to their history of chop and change, with Clement Teo’s three-season reign the longest among all Hougang coaches.

During this time, he has kept a core of local players while searching for the right blend of imports to take the team further.

Vice-captain Faiz Salleh, who has been at the club since 2014, said: “Backroom stability helps to build the club progressively. We are on one frequency and have built a strong bond and understanding.

“This season, we also have a more balanced squad with healthy competition. Everyone is on their toes but we also have a good relationship with one another.

“It has been an adventure and I’m happy to see how much Hougang have grown to become a team even the bigger clubs are wary about.”

Indeed, the Cheetahs have played a big role in recent title races. Last season, they were the only team to beat Tampines, with the Stags losing the championship to Albirex by three points. This term, they have cost the nouveau riche Sailors five points, the current gap between the Japanese league leaders and the top local club.

Beat Tampines again on Saturday, and they would complete a season sweep against the Stags, and be well-placed to finish above Tampines, for the first time.

While Teo’s ability to tailor his tactics to the players at his disposal has played a big role in Hougang’s success, the 54-year-old was quick to deflect any praise to his men and backroom staff.

He said: “I couldn’t have done this alone. Our chairman (Bill Ng) and the management committee have supported me with a good technical team that helped me execute what we have planned for the long term.

“The players are united, and they want to make life difficult for teams at the top, and while we have the league’s top scorer (16-goal Tomoyuki Doi), we don’t rely only on him to score and win games. Similarly, our attackers also help with the defending.”

An eye-catching statistic this season has been Hougang’s league-high 14 different scorers, which is consistent with the 17 scorers they had in 2019.

“I’m happy our players have the urge to attack. They are always welcome to take a shot because if they do, there’s always a chance we can score,” said Teo, who is already planning for next season.

“As coaches and players, we are always learning, and as a team, we still have to improve our tactical discipline, game management and consistency to be stronger.”

It is understood that Hougang will again retain the bulk of their local roster, and are looking to tie down Doi and Kaishu Yamazaki, a utility player who has chipped in with one goal and six assists. Also on Teo’s wishlist is the addition of a strong defensive option and a dedicated analyst to help study his team and opponents.

Such plans and camaraderie fill Faiz with optimism that a trophy is in sight. The 29-year-old defender said: “At the rate we are going, if we continue to stay united and work hard, we can definitely achieve something special real soon.”