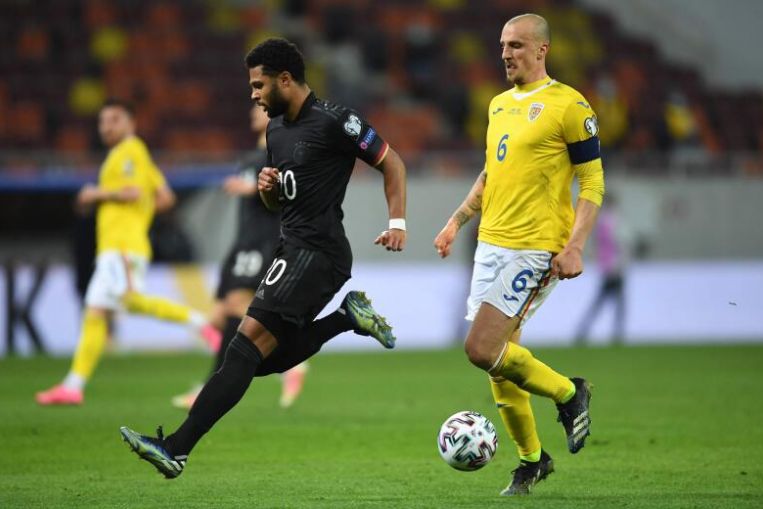 BUCHAREST (AFP) – A first-half goal by Serge Gnabry was enough to seal a tight 1-0 away win for Germany against Romania on Sunday (March 28) in their World Cup qualifier.

The Bayern Munich winger has scored 15 goals in just 19 appearances for the Mannschaft.

Germany out-muscled their hosts with 18 shots on goal, twice as many as the Romanians.

However, the hosts finished stronger in Bucharest with clear chances in the dying stages.

The away win leaves Germany top of Group J by just a single goal ahead of Armenia who also won their first two games.

The Germans can complete that hat-trick against North Macedonia in Duisburg on Wednesday.

Having also raced into an early lead in Thursday’s 3-0 win over Iceland in Duisburg, Germany again wasted no time as the same team started against Romania.

Loew was caught on camera singing the chorus of the Barry White hit “You’re the First, the Last, My Everything” before Saturday’s pre-match press conference in Bucharest.

However, “Can’t Get Enough” would have been more appropriate as his side picked up where they left off against Iceland.

Antonio Ruediger put a ball over the defence to Chelsea team-mate Kai Havertz who squared the ball for Gnabry to fire home on 16 minutes.

It was almost 2-0 four minutes later when Joshua Kimmich clattered the crossbar with a deflected shot from 25 metres.

It stayed 1-0 at the break, but Romania goalkeeper Florin Nita kept his side in the game with a string of saves early in the second-half.

He parried a fierce Leon Goretzka shot, then pushed the ball around the post from a Gnabry shot after the winger beat two defenders on a mazy run from halfway.

With an hour gone, Nita gratefully gathered the ball after Ilkay Gundogan failed to get a clean strike.

Nita was again called into action with ten minutes left to parry a shot by Chelsea striker Timo Werner.

At the other end, Manuel Neuer, who turned 35 on Saturday, was tested late on when Romanian forwards George Puscas fired straight at the Germany goalkeeper.

Then Nicolae Stanciu broke away, but could only fire into the side netting as the visitors held on.