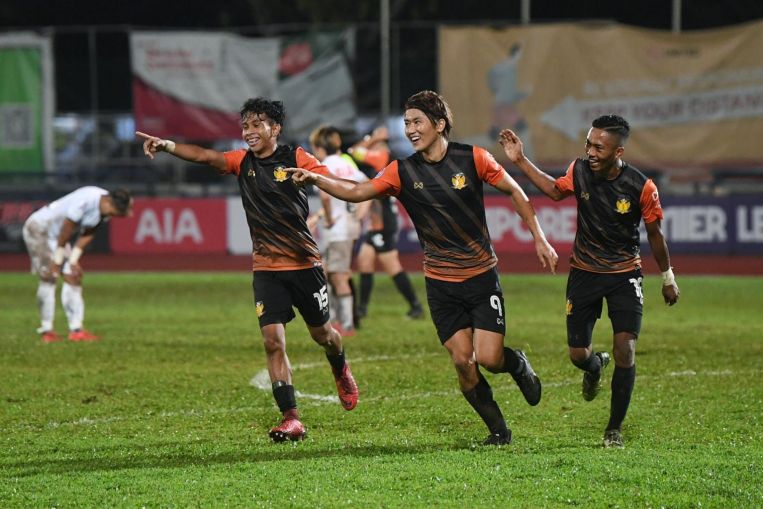 SINGAPORE – Led by their new Japanese hitman, Hougang United have gatecrashed this season’s Singapore Premier League (SPL) and delivered a warning to their championship rivals.

After finishing sixth in the eight-team standings last year, the Cheetahs are now looking down on the rest of the chasing pack after a stunning 5-1 win over Tampines Rovers on Saturday (April 3).

Hougang forward Tomoyuki Doi, who joined from defending champions Albirex Niigata, continued his great start with his new club as he scored a hat trick. The 23-year-old now has seven goals in four games and leads the goalscoring charts.

He said: “To be honest, I didn’t expect this result and to score three but I knew I was going to have the chances today. Now, I’m thinking more about how I could have scored even more today and that is disappointing. I am still not satisfied yet and I want to be top player, so I must do better.”

This was Hougang’s second statement win, after they beat the big spending and title favourites Lion City Sailors 3-1 on March 20.

Hougang assistant coach Firdaus Kassim was delighted with the three points and also the “hunger” shown by his players.

He said: “We showed our tactical flexibility today. We played a pressing game in the first half and in the second we packed the midfield and then ended the game with a back five. It’s been a process for us and we had to build from what we had last season.”

His side lead the table on nine points, two clear of the Sailors who beat the Young Lions 3-1 in the evening’s other clash. Albirex are also on seven points but have a game in hand and host Geylang International on Sunday.

Firdaus added: “We aren’t thinking of ourselves as being in a title fight or thinking at all about the title. What this win gives us, is the belief that we can win the next game.

“We do not know where this will put us but what we can do is to win every game. It does put us in good contention but we won’t be talking about the title.”

For Tampines, who were on a 13-match unbeatean run stretching back to last season, this was a sobering defeat for last year’s runners-up. To make matters worse, they also finished the game with 10 men after defender Baihakki Khaizan was given a second yellow and sent off in the second half for a foul on Doi.

The Hyogo-native opened the scoring at the Hougang Stadium in the 19th minute through a swift counter attack from the hosts. Doi received a pass from Shahfiq Ghani just outside the box and found the bottom corner with his weaker left foot.

His second came just three minutes later. He latched onto a pass from left-back Farhan Zulkifli and while Tampines goalkeeper Syazwan Buhari palmed away his initial effort, Doi tucked in the rebound.

The Stags responded almost immediately and halved the deficit a minute later when Irwan Shah’s cross from the left was finished by striker Boris Kopitovic.

The visitors pushed for an equaliser after the interval but it was Hougang who were more decisive. In the 66th minute, Kyrgyzstan defender Maksat Dzhakybaliev reacted quickest to a Kaishu Yamazaki corner to extend the home side’s advantage.

Things got worse for Tampines when Baihakki received his marching orders. From the resultant freekick, Shahfiq lashed a powerful shot past Syazwan.

Doi completed his treble in injury time with another long range strike.

“My favourite was the first because I have always practised on my left foot,” he said. “This week in training I worked on it a lot so I’m really happy with that goal.”

The Cheetahs have recruited well in the off season. Besides Doi, they also brought in midfielder Yamazaki from the Sailors and Brazilian attacker Gilberto Fortunato and have been rewarded for a more ambitious approach against the better teams in the SPL.

After their opening day 3-1 loss to Albirex, Hougang have rebounded with some impressive performances and are also the league’s top scorers with 13 goals from four games.

They have however, failed to keep a clean sheet in their last 12 outings.

If coach Clement Teo and his team are to be serious title contenders, they will need to tighten their defence.