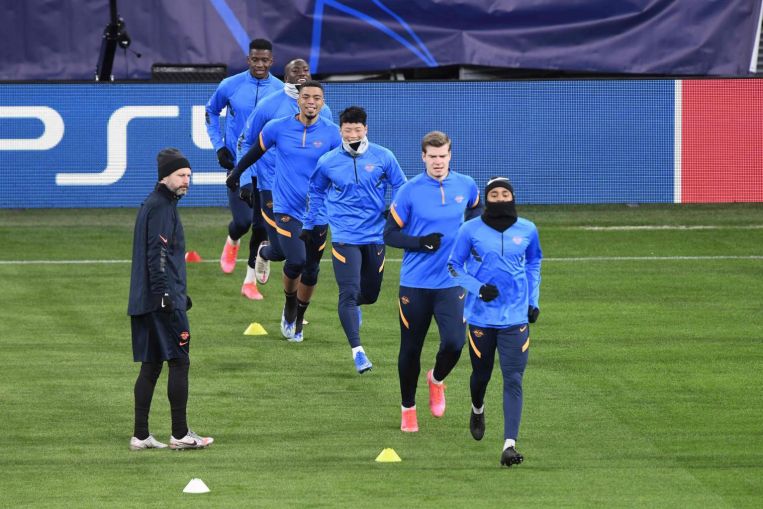 BUDAPEST (AFP) – For Budapest and Bucharest, acting as unexpected hosts of round-of-16 matches in a Champions League disrupted by the Covid-19 pandemic offers a moment in the football floodlights at, they insist, little risk.

With some countries unwilling to make travel exceptions for football teams, Uefa and the clubs have been scrambling to avoid postponing matches.

As a result, Budapest will host a first-leg match on Tuesday (Feb 16) between RB Leipzig and Liverpool and another between Moenchengladbach and Manchester City on Feb 24.

For good measure, the Hungarian capital has also landed Tottenham’s Europa League away tie against Austrian club Wolfsberger on Thursday.

Bucharest meanwhile will host the first-leg Champions League clash between Atletico Madrid and Chelsea, scheduled for Feb 23, a useful rehearsal for the four European Championship matches to be played in the city in June.

While both Hungary and Romania have long football histories, neither expected to be the site of Champions league knock-out games.

This season, Ferencvaros became the first Hungarian side to reach the group stages of the competition since 2009, but they finished bottom of their group.

Romanian champions Cluj did not even qualify for the group stages.

While the Spanish and German governments refused to ease their coronavirus bans on visitors from Britain, Hungary’s Prime Minister Viktor Orban, a football fan, again swept away concerns.

Budapest hosted the European Super Cup between Bayern Munich and Sevilla in September.

When that match was played in front of more than 15,000 spectators at the 67,215-seat Puskas Arena, in what Uefa called a “pilot project”, it sparked debate. This time, fans, and therefore controversy, will be absent.

The players will have to submit to strict restrictions set out by Uefa and Hungarian officials. They will be “isolated from the public” and “not be allowed to meet anyone and will have to undergo PCR tests,” Jeno Sipos, spokesman for Hungary’s national football association (MLSZ) told AFP.

The “minimal” health risk means “Budapest has little to lose,” he said. “The visiting clubs take care of the costs, which means work for the staff at the stadium and at the empty hotels.”

When Bucharest was chosen over Tallinn, Warsaw and Genoa to host the Atletico-Chelsea game, the Romanian Football Federation (FRF) said it had not hesitated for a second in agreeing the same conditions: no spectators, respect for health restrictions.

“A match played in the framework of the most prestigious European inter-club competition is a major sporting event and we offered our support to the organisers as soon as this possibility was raised,” said FRF president Razvan Burleanu.

Fans have been banned from Romanian stadiums since March.

Atletico coach Diego Simeone has fond memories of the 54,000-seat National Arena where his side won the Europa League in 2012.

Bucharest is one of the 12 host cities for the European Championship this summer but officials said they had dropped an offer to add to their four matches.

“We proposed this following last year’s postponement of the competition, but a possible redistribution of the matches is out of the question at this stage,” said Romania’s Euro coordinator, Florin Sari.

Hungary, on the other hand, has said Budapest could host more games if other cities pull out due to coronavirus restrictions. Despite the pandemic, Uefa currently insists it is sticking to its original format of playing in 12 cities stretching across Europe.

Hungary is not hiding its ambitions. Mr Orban, who dreams of hosting the Olympic Games, is eager to attract major events. Hungary hosted the World Swimming Championships in 2017, the Women’s Champions League final in 2019 and will welcome the 2023 World Athletics Championships.

Mr Orban has injected millions of dollars into football through a vast stadium construction programme, which includes the Puskas Arena, which was completed in 2019.

For Gyorgy Szollosi, editor-in-chief of the daily Nemzeti Sport, the Champions League games are proof of the “success of Hungary’s sports diplomacy”.