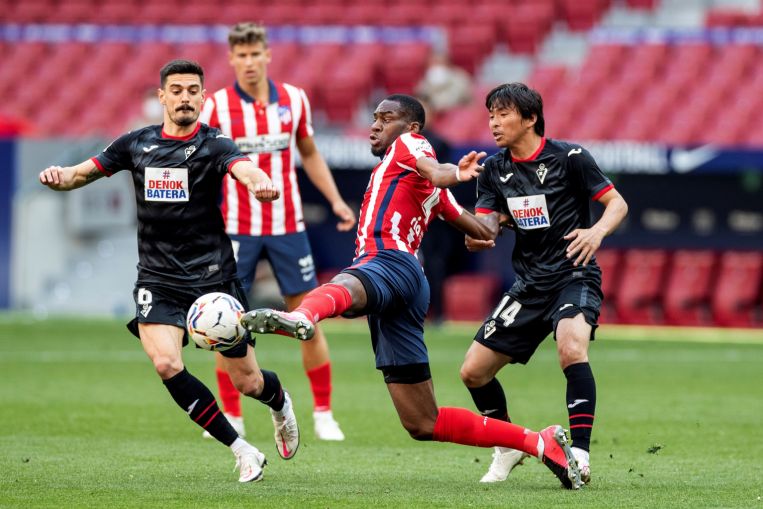 MADRID (REUTERS) – La Liga leaders Atletico Madrid thrashed basement club Eibar 5-0 on Sunday(April 18) in an emphatic response to a stuttering run of results which had let their rivals back into the title race.

Atletico were missing two of their top forwards in Luis Suarez and Joao Felix but Argentine striker Angel Correa took responsibility in attack, scoring twice at the end of the first half to put the hosts in charge.

Yannick Carrasco further stretched their lead soon after the interval before Marcos Llorente struck twice to complete the rout as his side picked up a first victory in three matches after drawing 1-1 at Real Betis and losing 1-0 at Sevilla.

Atletico top the standings on 70 points after 31 games and extended their advantage with second-placed Real Madrid to three points after the champions were held 0-0 at Getafe later on Sunday.

Barcelona are third on 65 with a game in hand while fourth-placed Sevilla stayed in contention to move on to 64 points after beating Real Sociedad 2-1.

“It gives us enormous joy to win this game so comfortably and so convincingly,” Correa told reporters.

“The game was pretty tight until the first goal but then the game opened up and we were able to wrap it up.” Eibar are bottom with 23 points and have failed to win in their last 14 matches, 10 of which they have lost.

The visitors did not have a single shot on goal although they gave Atletico a fright midway through the first half when Alejandro Pozo whipped in a cross to an unmarked Kevin Rodrigues, who narrowly failed to make contact with the ball.

Atletico dominated possession but did not have a clear opportunity until Correa broke the deadlock, arriving at the far post to prod a freekick into the net.

The Argentine forward struck again moments later, swivelling past a defender before producing a classy finish to further make amends for missing several opportunities against Betis.

“The great thing about football is that every week you have a chance for revenge. I was feeling a little due to missing those chances but today I’m happy as this time they went in,” added Correa.

A heavily depleted Real Madrid side scraped a 0-0 draw at struggling Getafe on Sunday.

Real beat Barcelona 2-1 last week and overcame Liverpool in midweek to reach the Champions League semi-finals but were crippled by the absence of nine players due to either injury, suspension or Covid-19 positives.

Forward Mariano had an early goal ruled out for offside after a VAR review but Getafe had far more and far better opportunities, hitting the woodwork in the first half and being thwarted by two fine saves from Thibaut Courtois in the second.

The draw interrupted a run of four straight league wins for Zinedine Zidane’s side and left them second on 67 points after 31 games. Getafe are 15th on 31 points, three above the relegation zone.

“I don’t see this as two points dropped, it’s always difficult to come here,” said Real defender Marcelo. “We knew what it would be like here, the pitch was very dry and we couldn’t get the ball moving quickly. We have hardly any time to rest but we have to keep on giving everything, that’s what football is like right now.”

Despite the many absences, Zidane chose to start without top scorer Karim Benzema and left Toni Kroos on the bench, handing a first start to defender Victor Chust and a debut for 20-year-old midfielder Antonio Blanco from the bench.

Getafe could have scored three times in the opening 10 minutes and then striker Jaime Mata struck the post with a header. Real’s Mariano saw a shot cleared off the line from David Timor, adding to his frustration after his goal was chalked off for a fractional offside.

The home side continued to dictate the play after the interval as Real grew ever more tired but Getafe could not get past Real keeper Courtois.

The Belgian flew towards the top corner to beat away a shot from Angel Rodriguez and then reacted quickly to tip a long range effort from Nemanja Maksimovic over the bar after it took a deflection off Chust.

Getafe had two penalty appeals waved away for incidents involving Real centre back Eder Militao, who brought down Enes Unal in the first half and then collided with Angel just as the forward was getting his shot away.