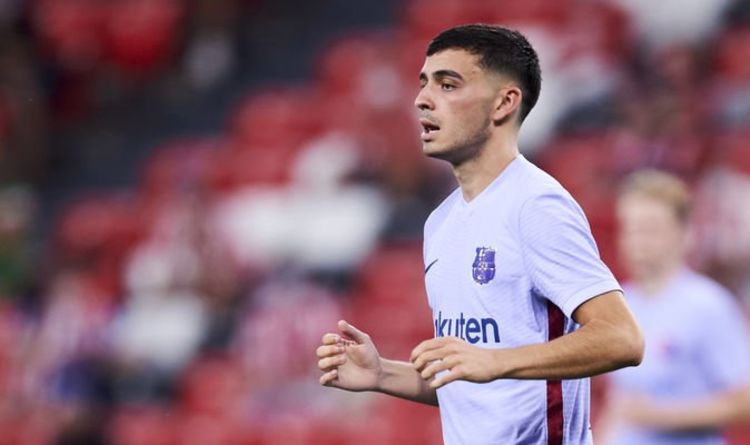 Liverpool are in the market for a new star for next season and with Barcelona prodigy Pedri reportedly top of their list, Express Sport takes a look at which players may be sold to raise funds for the youngster.

However, with the Catalan club’s financial straits looking as dire as ever, they could be forced to sell their star asset in a bid to balance the books considering his contract is set to expire next summer.

Liverpool are reportedly interested in the playmaker alongside Manchester City according to OK Diario, but with the Merseyside club not likely to have the funds of £86million required to purchase Pedri outright, they would probably have to sell to buy.

Alex Oxlade-Chamberlain could be sold in order to make way for Pedri.

Signed from Arsenal in 2017, Oxlade-Chamberlain made a brilliant start to live on Merseyside, scoring decisive goals on the Reds’ way to the Champions League final.

Yet after picking up a serious injury towards the end of the season, it took the Portsmouth-born midfielder exactly a year to make an appearance again – by which time Liverpool had replaced him. Valued at £16.2m by Transfermarkt, he would go a long way in funding a move for Pedri.

Another player is Naby Keita, who has recently undergone the toughest time of any Premier League footballer at the moment.

The Guinean central-midfielder is on international duty with his country, however their game against Morocco was postponed after hours of gunfire in the capital of Guinea where he only flew home on Tuesday afternoon.

The midfielder has struggled for minutes in his time at Anfield and could be sold elsewhere over the summer in a bid to reinvigorate his career with Transfermarkt valuing him at £28.8m.

Forgotten man Divock Origi could also be used for a transfer fee. Valued at £10.8m, the Belgian is way down the pecking order at Anfield of late and is not likely to get games under Jurgen Klopp.

Valued at a price most European clubs can afford, Origi is a huge option who could command a fee of more than his value as he has three years left on his contract.

And finally, Nat Phillips and Curtis Jones are also options to raise funds.

Phillips signed a new deal this summer, but as fifth-choice centre-back, Liverpool likely only extended his contract to avoid losing him on a free after interest from Burnley, Brighton and Southampton for a reported £7m.

Jones is a different tale. Regarded as one of the more promising young midfielders in the league, he hasn’t quite played as much as Liverpool would have liked to.

And for an estimated £27m, it would make sense for Jurgen Klopp to cash in following reported interest from Aston Villa.