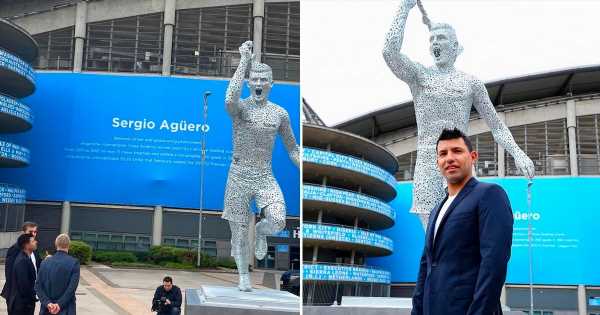 The sculpture, which was unveiled on Friday to mark the 10-year anniversary of his famous title-winning goal in 2012 against QPR, features Aguero’s famous celebration in extra-time as Man City secured their first-ever Premier League title.

But at the unveiling of the sculpture, many were quick to point out that it did not really resemble the former Argentine striker. One asked online: “David Nugent isnt it? Another said that Aguero looked perplexed in his photo with the statue. “Aguero: is it supposed to be me?”

A third stated: “Even Aguero looks confused as to who it looks like.”

Someone commented that the statue resembled a certain Real Madrid star: “Nice of Man City to commemorate the 10-year anniversary of Aguero scoring the most famous goal in their history by commissioning a statue of Toni Kroos.”

But another commenter had other ideas: “I was thinking more Ricky Hatton, but there’s definitely an element of Kroos there…”

Do you think the statue resembles Aguero? Let us know in the comments section below

Even still, Aguero said he was overjoyed with the shrine to him and his goal. “Truthfully, it is a very beautiful thing for me, to see myself 10 years ago is very moving,' said the 33-year-old. “In those 10 years, I was able to win a lot of trophies and was able to help the club become one of the most important in the world.

“I am very grateful to the club for making this statue in recognition of my football career in Manchester. It is something very special.”

As per BBC Sport, the steel statue was forged by sculptor Andy Scott and it joins fellow Blues legends Vincent Kompany and David Silva on the east side of the stadium.