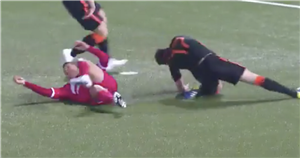 Ex-Manchester United star Daley Blind suffered a horrific injury after an awkward fall on international duty with the Netherlands.

The full-back, who spent four seasons at Old Trafford between his time at Ajax, was part of the squad that crushed Gibraltar 7-0 in their World Cup qualifier.

But the gloss was taken off the victory when the 31-year-old had to be stretchered off with an ankle injury.

Blind was putting pressure on forward Andre Tjay De Barr five minutes into the second half when the ball went away from the both.

And the Ajax defender was caught by the falling Gibraltar player, landing on his left foot – which turned 90 degrees as the rest of his body fell to the floor.

The 31-year-old was seen wincing on the floor before physios attended him and a stretcher was needed to get the ex-United man off the pitch.

Manager Frank de Boer, though, made it clear after the game at the Victoria Stadium that the Dutch full-back

“Daley Blind? It looked serious. But it's his ankle, not his knee. He did not have to leave for the hospital,” he said.

Despite the manager’s comments, viewers were left in shock at the nasty injury the defender picked up.

“This is looking so bad,” one said.

Another commented: “Praying for Daley Blind.”

While a third added: “Wishing Daley Blind a speedy recovery. Looks like a horrific injury, that.”

Blind went off the pitch with the Netherlands 1-0 up, thanks to a curling effort from inside the penalty box by Steven Berghuis five minutes before half time.

After the ex-United man had gone off injured, the floodgates opened for Gibraltar as the Dutch got four goals in nine minutes.

It was the national side’s biggest victory on the road since beating San Marino in 1993.