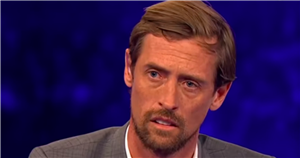 Former Liverpool star Peter Crouch has admitted he has been swayed in his thinking over who is better between Cristiano Ronaldo and Lionel Messi.

The debate between the pair has raged on for over a decade with the two tussling it out for the biggest prizes in football.

It was clear to see on Messi's face when Argentina won the Copa America that this was an enormous moment in his career, finally dispelling the myth that he could not be considered an all-time great because of his lack of honours for his country.

Equally, the fact Ronaldo lifted the Champions League trophy three times in a row – a pivotal part every year – with Real Madrid, winning the Euros and Nations League along the way.

For many, picking who is the greatest of all-time has proved incredibly tricky and that is the case for ex-England star Crouch.

The lanky striker was firmly in the Messi camp but has admitted he is considering switching allegiances after being wooed by his second Manchester United debut.

He told the Daily Mail: "I have always been a Lionel Messi man. A gift from God. The poise, elegance and everything that goes with his genius is spellbinding.

"Cristiano Ronaldo became the all-time top scorer in international men's football last week and I was fortunate enough to be there to witness that unfold with a lager in hand, drinking history in, over in Portugal.

"Republic of Ireland had kept him quiet — he even missed a penalty — but then, bang, two unbelievable headers. Everybody there was in the presence of greatness and that is what Manchester United have bought.

"When he signed from Juventus, I had a bet with a United fan that Mohamed Salah would score more goals this year. Having watched his 'second debut' against Newcastle, I'm slightly concerned that my wallet might be in danger.

"I often wondered about the single-mindedness that has made him one of the finest ever to grace our sport.

"The thought that the unceasing relentlessness to plunder hundreds of goals could have a detrimental impact on the team, because he is so selfish in some ways, did occur to me. Shoots from anywhere, Ronaldo. How will those around him react?

"But those fears are long gone because of his sheer consistency.

"Ronaldo was one of the first players to hire a personal chef. It was not the done thing at the time. The attention to detail stood out and saw him harness his undeniable talent. Messi had a divine right, Ronaldo has worked. Two different paths and we are lucky their careers collided as they have."