Everton are seeking their sixth permanent manager in five years following the unexpected departure of Carlo Ancelotti to Real Madrid, but to whom should the club now turn?

A hectic 24 hours saw Everton’s hierarchy left reeling from the news their manager had left to rejoin the club where he won the Champions League for a third time during his career in 2014.

Ancelotti had stated it was his ambition to lead Everton into their new Bramley Moore Dock Stadium in 2024, but majority shareholder Farhad Moshiri is now contemplating another managerial appointment.

Moshiri has been seeking stability and success ever since his arrival five years ago and he has overseen a vast outlay on playing staff across five managers in Roberto Martinez, Ronald Koeman, Sam Allardyce, Marco Silva and Ancelotti.

Faced with another season in which the club will not be participating in European competition, the last thing supporters want to see his a shortlist of candidates who represent completely different footballing philosophies.

The club is in need of direction, a clear identity and a new manager who is fully committed to the long-term project.

“There were rumours before the end of the season but rumours that Carlo Ancelotti himself played down. It was perhaps not unexpected there was an approach, but certainly unexpected that Ancelotti would leave this summer given the commitment he had made to Everton’s project.

“When Real Madrid come calling, it’s very difficult to say no and that approach came over the weekend. Things moved pretty swiftly with Florentino Perez leading the negotiations. Ancelotti left Finch Farm for the final time at 6.40pm last night so it was a very swift clear of his office and his desk.

“Everton find themselves looking for a manager and in a strange situation having backed Ancelotti despite finishing 10th in the Premier League. At times, the football had not been great and yet Real Madrid have come in for him.

“It was a four-and-a-half-year contract which he had worked 18 months of, which seems to be a bit of a cycle at Everton – the average amount of time since David Moyes left the club in 2013. 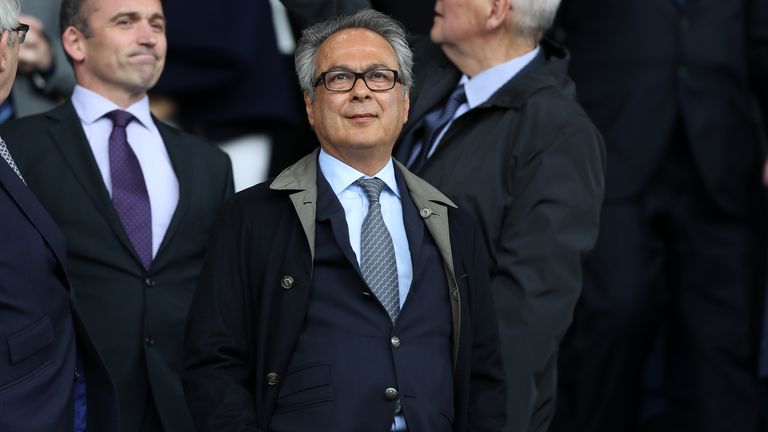 “We are still to get an exact figure on what that compensation package is, but do not forget Ancelotti leaves here with six of his backroom staff as well. It’s a recruitment process that Everton were not anticipating – bringing in a new manager and bringing in new backroom staff. They had already spoken with Ancelotti over prospective transfer targets and strategy in the window this summer.

“Everton had targeted signing a right winger and a right-back and that process is to some degree now on hold, although they have a director of football. You do not want to bring in players the new manager does not fancy, so it is a case now of Everton trying to make that appointment as soon as possible so the club can continue the rebuilding process that Ancelotti had started.”

What are Everton looking for?

“Ultimately, it is Moshiri who deals with the process and has the final say on who the new manager will be. He will seek advice from the director of football Marcel Brands and chairman Bill Kenwright.

“Everton’s chief executive Denise Barrett-Baxendale knows what it means to be an Evertonian and she will give great advice as to what it is that Evertonians are looking for.

“Which route do Everton want to go down? They went down the route of a world-class manager in Carlo Ancelotti. His reputation goes before him, which is why Real Madrid have again decided to turn to him. If they go for another manager in that bracket, do you run the same risk of him being taken by another big club 18 months down the line?

“They have been down the route of Roberto Martinez and Marco Silva – managers who were looking to build something here. Martinez took Everton to a record points total in the Premier League in 2014 and finished fifth but was never able to build on that while it never quite happened for Silva.

“Martinez is again being linked to the job given the success he has had with Belgium, and he may feel he has unfinished business given the circumstances in which he left. David Moyes is an interesting one as he was in line for the job when Ancelotti was appointed, and he has had a successful season with West Ham which has triggered the year extension to his contract. West Ham are confident of keeping him beyond that so he might be a difficult option for Everton to see through.

“Nuno Espirito Santo is up there in the betting, currently out of work having left Wolves but maybe his association with Jorge Mendes as an agent might not work for Everton, to be so reliant on one person for the recruitment policy of the club. There is a lot of thinking for Everton to do.

“They will want to go along the lines of someone who is building a reputation as a world-class manager, a progressive manager and someone who wants to be fully committed to a long-term project at Everton. There is no quick fix at the moment. It’s a squad that needs rebuilding and it is a big job once again.” Everton supporters have longed for a clear identity to the team, and Rangnick has shown himself to be a character capable of providing that during his career in Germany. The Daily Telegraph claim the 62-year-old finds himself once again on Everton’s shortlist.

A pathway and playing style that is identifiable throughout age group level all the way to the first team is something Rangnick implemented at former clubs Red Bull Salzburg and RB Leipzig.

Speaking to The Coaches’ Voice in November 2020, he said: “We were trying to implement a specific DNA into the club. The headline of everything and the guideline was the style of football that we spoke about earlier on.

“And this consistent orientation towards it in all areas was where we put our emphasis on from day one. The playing style, with a high recognition value even on a bad day you should still be able to recognise the kind of football we wanted to play.

“By doing that we create a corporate identity in the whole club, not only with regard to the players but also with regard to the coaching staff. Even the fans, in the end, identified themselves with the style of football we were playing.” 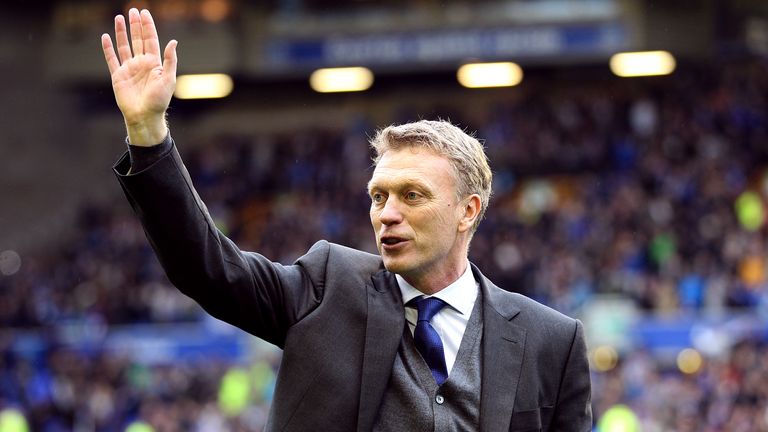 Moyes could be set for a dramatic return to Everton, with the Daily Mirror reporting the West Ham boss is on the shortlist of names to replace Ancelotti.

The pinnacle of his time in charge was undoubtedly his momentous fourth-place finish in 2005. Sadly for the club, this only resulted in a qualification berth for the Champions League, which Everton were unable to negotiate past.

Moyes successfully managed Everton for 11 years despite a lack of financial support, securing two fifth-placed finishes and another in the top-six spot between 2007 and 2009

The 58-year-old left for Manchester United in 2013. The Scot was under consideration to replace Marco Silva at Everton in December 2019, before the club appointed Ancelotti on a four-and-a-half-year contract.

It could prove difficult to prise him away from West Ham this time around, however. Moyes triggered a 12-month extension to his initial 18-month deal, which ends this summer, following the Hammers’ impressive Premier League campaign as they qualified for the Europa League. Martinez is currently gearing up for the European Championships with Belgium, but it has been reported the Spaniard is keen on returning to club football – and a potential return to Everton.

Belgian publication Sport Magazine claimed last month Martinez has instructed his agent Pini Zahavi to find him a new club over the summer.

The 47-year-old has already been linked with the vacancy at Tottenham but, like Moyes, he may feel he has unfinished business at Goodison Park. Under Martinez, Everton secured their highest points total of the Premier League (72) during the 2013/14 season.

But critics claimed that was in part a legacy of the Moyes regime, and by the end of the 2015/16 season – in which he took the club to the FA Cup and League Cup semi-finals – he was sacked by Moshiri after amassing a win percentage of just 38 per cent – a combined 22 league games across his final two seasons. 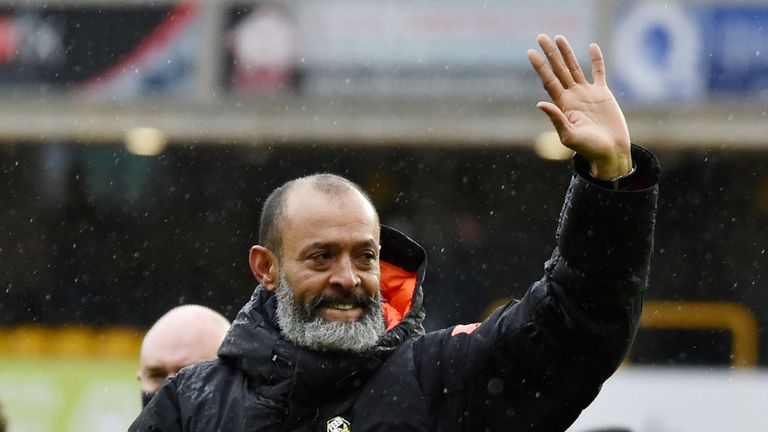 Having cut his teeth in his native Portugal with Rio Ave and Porto either side of a period in Spain with Valencia, Nuno established himself as a rising star in England.

He led Wolves into the Premier League at the end of his first season and then to seventh-place top-flight finishes in each of the next two campaigns.

He and the club decided to part ways at the end of the season after a disappointing – by their standards – campaign, due in no small part to the extended absence of injured striker Raul Jimenez.

Nuno has reportedly attracted interest from Everton, Crystal Palace – where he is the frontrunner – and Lazio, who are looking for a replacement for Simone Inzaghi. Benitez has been out of work since ending his lucrative spell in charge at Chinese Super League club Dalian Professional in January.

He has made no secret of his desire to return to the Premier League after parting company with Newcastle during the summer of 2019 having failed to resolve his differences with owner Mike Ashley.

Magpies head coach Steve Bruce has worked in the Spaniard’s shadow ever since, although with a much-anticipated takeover yet to materialise the prospect of a return for the much-travelled Champions League winner appears remote, in the short term at least.

Linked with Celtic earlier in the year, the former Liverpool, Chelsea and Real Madrid boss has also been tipped as a contender for the Spurs and Everton jobs.

In his column for The Daily Telegraph, Sky Sports’ Jamie Carragher wrote: “Of the names instantly linked with Everton as the Ancelotti news broke, who is more qualified than my former Liverpool boss Rafa Benitez?

“Rafa is available, settled in the area and I am sure he is ready if Moshiri is prepared to consider one of the more shocking managerial appointments in Merseyside football history.

“At the very least, Benitez should be under consideration as Moshiri begins yet another managerial quest. And not for the first time, before the owner decides the right candidate, he has to be clear of the football direction he wants to take.”

Conte left Inter Milan just weeks after leading the club to a first Serie A title in 11 years. He reportedly decided to call it a day in frustration at the lack of funds available to him, but his pedigree is first class with the former Italy boss having led Juventus to three successive titles and won the Premier League and FA Cup in his time at Chelsea. He has been linked with the vacancy at Tottenham.

Campbell told Sky Sports: “Everton have to react in a positive way. The mindset and the project is still there. You’ve got to try and swap Ancelotti for another quality manager, I think this is really important.

“It’s going to send out a really big message to the Evertonians. For me, you’ve got to go for the best manager that is available – and that is probably Antonio Conte.”