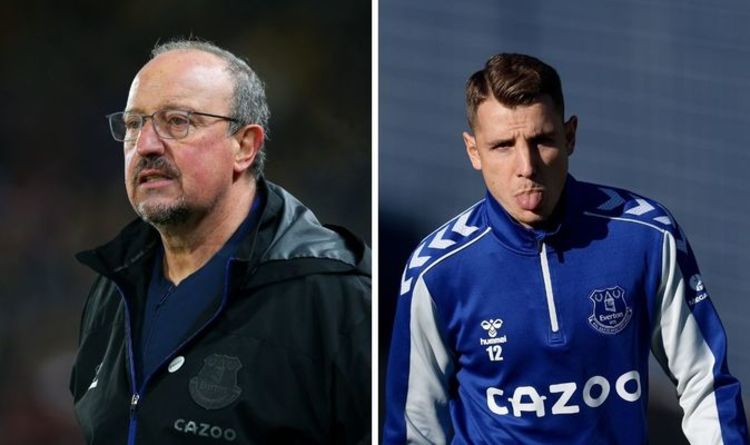 Everton manager Rafa Benitez has fired back at criticism over Lucas Digne’s £25million departure. Digne left the Toffees for Aston Villa earlier this week, and Benitez has faced questions about selling a player of his quality to a direct Premier League rival.

Villa are currently three points above Everton in 14th, and both clubs will have similar aims for the remainder of the season.

Benitez froze Digne, who has previously represented Everton as captain, out of his plans ahead of his switch to Villa Park.

The France international hadn’t featured since the 4-1 derby defeat to Liverpool at the start of December.

And he aimed a dig at Benitez, already under-fire by Everton fans due to the club’s poor season so far, in his parting message on social media.

But ahead of Everton’s trip to Norwich this week, Benitez explained his reasoning for allowing Digne to join a direct rival in January.

He told reporters: “The reality is that when you have a player that is thinking about leaving, and then you receive an offer, a possibility, the main thing for me as the manager is to think about my responsibilities to make decisions for the best for the team, for the best for the club and then the future.

“So we bought a couple of good players, young players. They are good players, hungry players that I’m sure will be good now, but I’m sure they will be even better in the future.

“So overall, it’s something that has to be, in the end, positive for the club when you are selling a player that will be 29 years old next year, and you bring a player of 22, a player of 20 years old and in different positions that we needed to balance.

“So I think we have balance in the squad, we are improving the economy, and hopefully everything will be positive for us.”

Villa boss Steven Gerrard has confirmed Digne is available and will be in contention to make his debut against Manchester United on Saturday.

Both could make their Premier League debuts at Carrow Road as Everton eye their first three points of 2022.