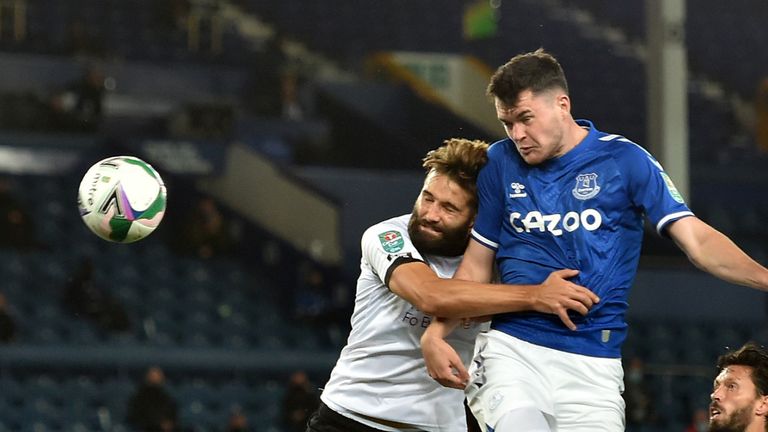 Everton avoided any worries of a Carabao Cup banana skin as their much-changed side beat Salford 3-0 to progress to round three.

Michael Keane nodded the Toffees ahead after eight minutes at Goodison Park from Gylfi Sigurdsson’s corner, but the hosts struggled to test visiting goalkeeper Vaclav Hladky enough before the break to ever truly threaten to add to their lead.

The summer arrival had to be at his best after the break, however, to save from Anthony Gordon and Theo Walcott, but could do nothing to deny Sigurdsson his 100th goal in English football when the Icelander fired home from Gordon’s cut-back.

The woodwork would then come to Salford’s rescue four times in the dying minutes as Sigurdsson again went close before Gordon struck the base of the post with a wonderful 25-yard curler, but when the young forward was brought down by Bruno Andrade with three minutes to go Moise Kean kept his penalty just under the crossbar to secure Everton’s safe passage to round three.

There was still time for a Kean header to rattle the woodwork in the final minute before Gordon struck the crossbar from the rebound, but Everton’s progression was already well secure, with a visit to League One Fleetwood Town awaiting next up, live on Sky Sports on Wednesday, September 23.

More on this story

Everton host West Brom in Saturday’s early Premier League kick-off at 12.30pm, while Salford travel to Grimsby later that day in League One at 3pm.