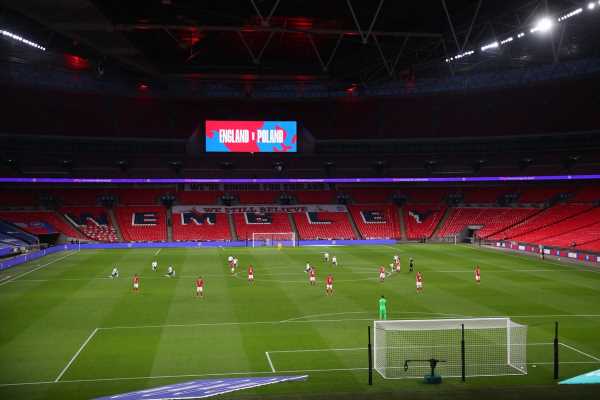 Wembley will host the Euro 2020 final

Uefa will allow host cities to upscale plans for supporters to attend Euro 2020 matches should conditions around the coronavirus pandemic improve.

The European governing body has asked for the 12 host cities – including Glasgow, Dublin and London – for their proposals on how many fans they expect to be able to accommodate by Wednesday.

The UK Government has announced plans for a number of test events – including a 21,000 crowd for the FA Cup final on 15 May – with a view to having Wembley full for at least some European Championship games.

Wembley will see England open their Group D campaign against Croatia on 13 June, before then welcoming Scotland on 18 June followed by the Czech Republic.

The national stadium is also set to host one last-16 game as well as both the semi-finals and then final on 11 July.

On Tuesday, Scotland First Minister Nicola Sturgeon was optimistic there would be a “reasonably good number” of supporters at Hampden for matches against the Czechs on 14 June and then Croatia eight days later.

Dublin, meanwhile, has three Group E games, involving Poland, Slovakia and Sweden, as well one of the ties in the knockout stage. The deadline for submissions is 7 April.

There is some uncertainty, though, as to whether the Aviva Stadium will be in a position to welcome supporters due to travel restrictions and limits on mass gatherings.

An Irish Government spokesman said assurances on minimum spectator levels could not be currently provided given the state of the pandemic.

The Italian Football Federation, however, said it had been told by the government that Rome’s Stadio Olimpico would be able to welcome spectators for Euro 2020.

Following the submissions, a meeting will be held on Thursday of the EURO Steering Group, which consists of the 12 national associations and Uefa.

Once hosts have submitted the scenarios, they will be allowed to come back to Uefa before 28 April with an increased view on how many supporters they could accommodate.

The governing body is understood not to be pushing the deadline back as such, but rather allowing venues to upscale if conditions around the coronavirus pandemic get better in the coming weeks.