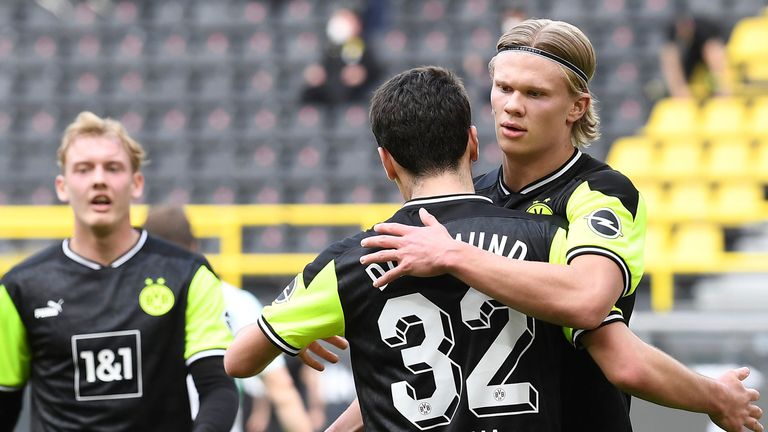 Borussia Dortmund striker Erling Haaland scored twice in four minutes on Sunday, ending his seven-game goal drought in all competitions, to help his team to a 4-1 win over Werder Bremen in the Bundesliga and revive their hopes of a top-four finish.

Fifth-placed Dortmund, on 49 points, cut the gap to Eintracht Frankfurt, in fourth, to four with five games left. The top four teams qualify for next season’s Champions League.

Norway international Haaland grabbed his first goal of the afternoon in the 34th minute with a penalty to put the hosts, eliminated in midweek by Manchester City in the Champions League quarter-finals, in front. Werder had taken a 14th-minute lead through Milot Rashica only for Giovanni Reyna to level in the 29th with a powerful shot.

The 20-year-old Haaland, a likely major transfer target if Dortmund fail to finish in the top four, then tapped in his 23rd league goal of the season in the 38th minute to complete Dortmund’s comeback with three goals in nine minutes.

Defender Mats Hummels’ header in the 87th minute made it 4-1 as Werder equalled their worst run in the Bundesliga with their fifth consecutive loss to stay on 30 points, four above the relegation play-off spot.

Serie A: Juve slip to fourth with Atalanta loss Juventus slipped to a late 1-0 defeat at Atalanta on Sunday as Gian Piero Gasperini’s side leapfrogged the champions into third place in the Serie A standings.

Juve, missing Cristiano Ronaldo due to injury, struggled to break down the in-form hosts without their Portuguese talisman and were forced to defend for much of the second half against Serie A’s top scorers.

It looked as though Juve had done enough to hold on for a point, but substitute Ruslan Malinovskiy snatched a fifth successive league win for Atalanta in the 87th minute, sparking wild scenes of celebration.

Atalanta moved on to 64 points, two ahead of Juventus, from 31 games played. Juve’s hopes of a 10th successive Scudetto are now all but over as they trail leaders Inter Milan, who play Napoli later on Sunday, by 12 points. Paris Saint-Germain stayed in the hunt for a fourth successive Ligue 1 title after Mauro Icardi scored in the dying seconds of stoppage time to secure a dramatic 3-2 home win over St Etienne on Sunday.

Icardi headed home a cross from fellow substitute Angel Di Maria to cap a frantic climax after the visitors took a 78th-minute lead and then levelled in the first minute of added time after Kylian Mbappe had turned the game PSG’s way.

The result left PSG second in the standings on 69 points from 33 games, one behind leaders Lille who were held to a 1-1 draw by eighth-placed Montpellier on Friday.

“The most important thing is to show character and never give up, always keep fighting and believing that you can get the three points,” he said.

“We are all very happy and it was a good performance. I think we deserved to win but we suffered and it was a very emotional finale.”

Looking weary from Tuesday’s 1-0 home defeat by Bayern Munich which sent them through to the Champions League semi-finals on away goals, PSG struggled and missed chances against a packed St Etienne defence. Mbappe was off target three times and Pablo Sarabia hit the post with a free-kick before the visitors punished the home side’s profligacy as Denis Bouanga superbly steered in a Miguel Trauco cross from the left.

Mbappe equalised 30 seconds later with a deft finish from close range after controlling a lofted Ander Herrera pass and the France forward fired PSG ahead with an 87th-minute penalty after he was brought down by goalkeeper Etienne Green.

The home side’s joy was short-lived, however, as Romain Hamouma levelled with a tap-in from two metres after PSG ‘keeper Sergio Rico failed to deal with Bouanga’s shot from the edge of the penalty area.

It looked like it was not going to be PSG’s day when Di Maria rattled the post with an inswinging corner but the Argentinian curled in a cross from the right moments later for Icardi to head home.

Third-placed AS Monaco, who are five points behind Lille, visit 16th-placed Girondins Bordeaux while Olympique Lyonnais, a further point adrift in fourth, take on second-bottom Nantes away later on Sunday.

La Liga: Atletico back on track, Sevilla stay in race

La Liga leaders Atletico Madrid thrashed basement club Eibar 5-0 on Sunday in an emphatic response to a stuttering run of results which had let their rivals back into the title race.

Atletico were missing two of their top forwards in Luis Suarez and Joao Felix but Argentine striker Angel Correa took responsibility in attack, scoring twice at the end of the first half to put the hosts in charge.

Yannick Carrasco further stretched their lead soon after the interval before Marcos Llorente struck twice to complete the rout as his side picked up a first victory in three matches after drawing 1-1 at Real Betis and losing 1-0 at Sevilla.

Atletico top the standings on 70 points after 31 games, four ahead of second-placed Real Madrid and five above third-placed Barcelona, who both have a game in hand. Eibar are bottom with 23 points.

Meanwhile, Sevilla came from behind to win 2-1 at Real Sociedad on Sunday and stay in contention for an unlikely La Liga title bid.

The visitors, who won a dramatic match at Celta Vigo 4-3 in their last fixture, fell behind in the fifth minute to a goal from their former forward Carlos Fernandez.

But they responded with two quickfire strikes by midfielder Fernando and striker Youssef En-Nesyri in the 22nd and 24th minutes to move into the lead.

Brazilian Fernando created the danger for the equaliser and then pounced on a poor clearance from Robin Le Normand to score.

En-Nesyri also showed good anticipation when he put his side in front moments later, following up a deflected shot which came off the post to steer the ball into the unguarded net.

Sevilla comfortably defended their lead in the second half to record a fifth win in six league games which included a 1-0 victory at home to Atletico this month.

Sevilla are fourth in the standings on 64 points after 31 games, three behind leaders Atletico Madrid who host Eibar later on Sunday. Real Madrid are second on 66 after 30 games and Barcelona third on 65 from 30 matches.

Sevilla have not won the Spanish title since 1946 and have not finished in the top two since 1957, but En-Nesyri dared to dream.

“We’ll go all out to win the seven games we have left and try to win La Liga. We’re going to fight for the title,” he told reporters.

Sevilla visit Levante on Wednesday before home games against Granada and Athletic Bilbao. They travel to Real Madrid on May 9.