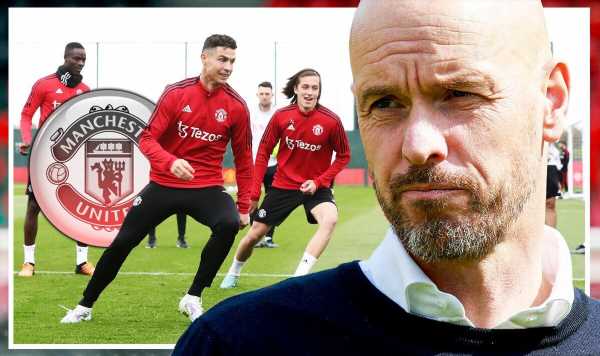 Incoming Manchester United manager Erik ten Hag will demand his squad to report back for pre-season two weeks earlier than initially scheduled. Ten Hag has been left less than impressed with the Red Devils since agreeing to become Ole Gunnar Solskjaer’s permanent successor this summer.

Mirror Sport report the Dutchman believes the squad he’s inheriting will require an extra two weeks of fitness work to prepare for the style of play he’s set to implement at Old Trafford. He is understood to have been left ‘unimpressed’ by United’s fitness levels while watching their recent games remotely.

Players were initially expected to return to Carrington to start a new era under Ten Hag on July 4. However, the 52-year-old’s demands will see some stars return to training as early as June 20, one month after this season’s final game against Crystal Palace at Selhurst Park.

Ten Hag believes poor fitness and a lack of conditioning are the primary culprits for United’s dismal displays this term. And he is set to begin meeting players via Zoom calls this week after potentially guiding Ajax to a third consecutive Dutch Eredivisie title on Wednesday.

Since taking the reins in November, interim manager Ralf Rangnick has been extremely outspoken about the club’s current crop and the recruitment that has caused them to be in their lowly position. The German coach has often criticised United’s fitness and physicality as they have failed to adapt to his gegenpressing style.

Ten Hag demands more of the same and expects his players to be in peak physical endurance for the entirety of games. So it comes as no surprise he wants to waste little time in drilling his philosophy into United’s underperforming stars.

If the majority of the squad return on June 20, they will be involved in just under three weeks of training in Manchester before heading on United’s pre-season tour of Thailand and Australia. Ten Hag’s first game in charge will be against Liverpool at Bangkok’s Rajamangala National Stadium.

The Red Devils then travel to Australia, where Melbourne will host clashes against Melbourne Victory and Crystal Palace before Aston Villa await in Perth. A full pre-season schedule for the first time in years will undoubtedly benefit the Ajax boss as he enters a daunting test to turn the club around.

Want the latest Premier League news as we publish it on Express Sport? Join our brand new Facebook group by clicking here.