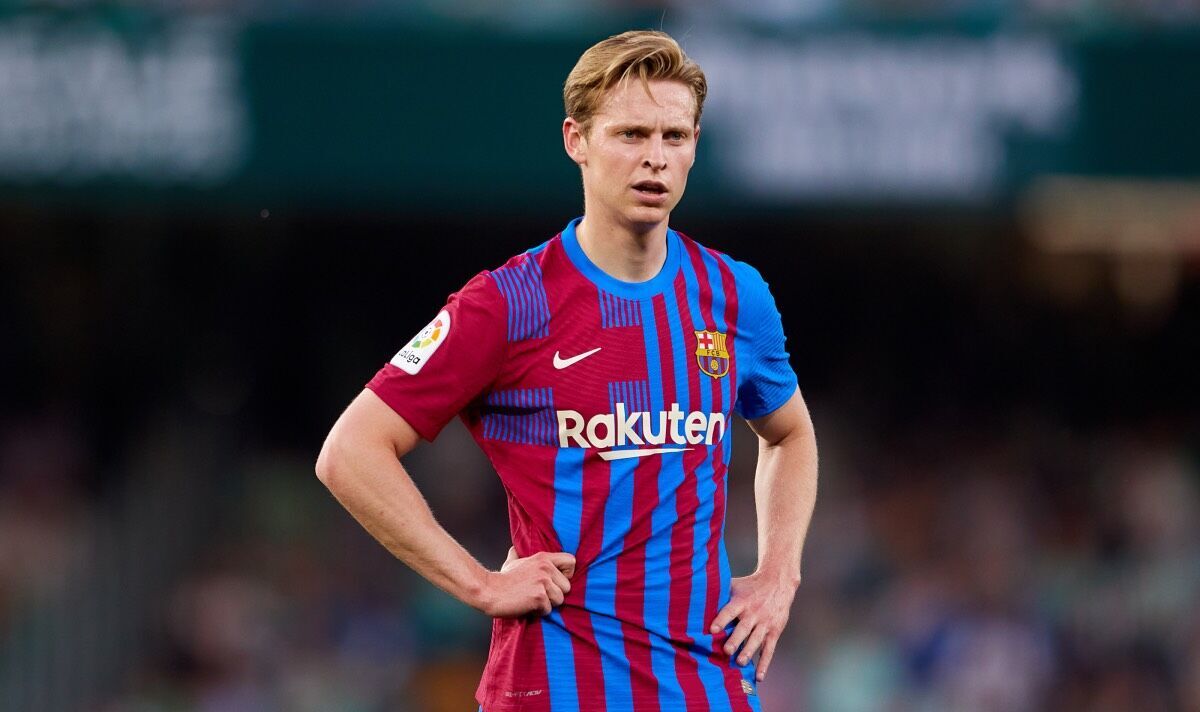 Erik ten Hag looks set to kick off his Manchester United tenure by sealing the signing of Frenkie de Jong from Barcelona. The Red Devils are expected to undergo a seismic summer of change, with the club’s struggling squad set for a significant overhaul, and it appears the Dutchman will make former Ajax favourite De Jong the first of several incomings this summer.

According to Spanish journalist Gerard Moreno, there is a 95 per cent chance United will complete a coup for the Netherlands international by the end of the month as Barcelona look to offload the midfielder. Moreno states that United are expected to snap up the 25-year-old for a fee in the region of £50-£60million as Ten Hag seeks to kick-start a summer spending spree with a statement signing.

It is understood that the La Liga giants fear De Jong’s value will decrease should they not sell him this summer, with the former Ajax star having struggled to produce his best form at the Nou Camp this season. Should De Jong sign the dotted line with United, he may well be the first of several exciting signings.

With the likes of Paul Pogba, Jesse Lingard, Edinson Cavani, Nemanja Matic and Juan Mata all heading for the exit door, and several others expected to follow, United are sure to bolster their ranks in the off-season. With that in mind, Express Sport takes a closer look at four exciting signings Ten Hag could make this summer.

It may be a case of second time lucky for United with regards to De Jong, having missed out on the midfielder in the summer of 2019. Back then, the Red Devils were one of a number of Europe’s elite looking to poach the Dutchman, fresh from De Jong having helped Ajax to a Champions League semi-final, however, it would be Barcelona who would win the race for his sought-after signature.

Having seen his promising career stagnate somewhat in Spain, De Jong may well be keen to re-ignite it at United under Ten Hag, a manager who got the best out of his back in his Ajax days. There’s no secret the Red Devils are desperate to reinforce their midfield with a player of real pedigree, and it appears they may be about to do so in signing De Jong.

Another who would be linking up with a former manager should he make the move to Old Trafford would be RB Leipzig full-back Nordi Mukiele. However, it wouldn’t be Ten Hag the French youngster is reunited with, but current interim Ralf Rangnick, who remains set to step up into a consultancy role come the end of the season.

It may well be the case that United exploit Rangnick’s connections to the Bundesliga side by snapping up the 24-year-old to reinforce the club’s leaky defence. The versatile Mukiele has experience all across the backline, but would be likely to emerge as United’s preferred option at right-back with the likes of Aaron Wan-Bissaka and Diogo Dalot having failed to consistently prove their worth this season.

With regards to adding some firepower upfront, there are few better options across Europe than Benfica striker Darwin Nunez. The Uruguayan, who has netted a staggering 34 goals within 41 appearances this season, appears increasingly likely to depart the Portuguese club this summer as he eyes the next step up in his career.

With question marks continuing to surround the futures of Cristiano Ronaldo, Marcus Rashford, Anthony Martial and Cavani, United will likely need to address their striking options and sign an out-and-out centre forward who can fire them back into the Premier League’s top-four reckoning. Nunez would certainly provide that star quality in attack and, at 22 years of age, is the sort of exciting young striker who fits the profile for a Ten Hag team.

While there can be no denying De Jong would be a real coup in midfielder, the Dutchman alone isn’t likely to fix United’s midfield malaise. The Red Devils’ current crop of options in the centre of the park have received their fair share of criticism this season and one player who can add some much-needed steel to that depart would be Wolves’ star Ruben Neves.

The 25-year-old has established himself as one of the Premier League’s most highly-rated midfielder and, with eight seasons of consistent game-time under his belt, at Wolves and with Porto, has a wealth of experience at his disposal. Not only has Neves garnered a reputation for scoring long-range screamers, but the Portuguese international is revered for his tough-tackling and ability to dictate play with his passing – two attributes currently lacking in United’s midfield.