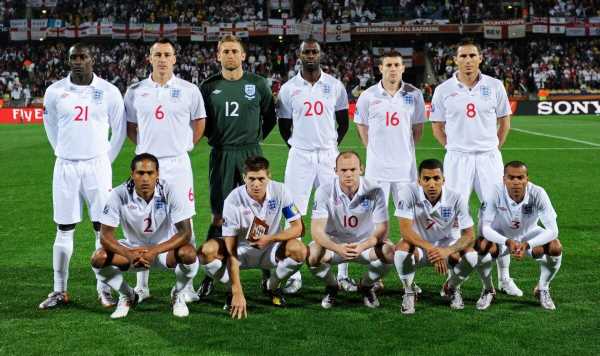 England will step out onto the field against USA tonight hoping to right the wrongs of 12 years ago. The Three Lions took the lead through Steven Gerrard in South Africa in June 2010, only for a Rob Green mistake to allow Clint Dempsey to draw the Yanks level. Express Sport now takes a look at the XI that started under Fabio Capello that night and what they’re doing now.

England decided to start Green for the match against USA, despite also having the likes of David James and a young Joe Hart in the squad.

It was a night to forget for the 42-year-old, whose Three Lions career never quite recovered from his error in South Africa.

These days, he’s working for BBC Sport. He announced his retirement in 2019 having had a short spell at Chelsea.

Glen Johnson was England’s right-back for the match against South Africa, having won Capello’s trust in qualifying.

He was strutting his stuff for Liverpool at the time, having joined from Portsmouth that same summer, and would retire from playing in 2018 after a few years at Stoke.

Now 38, Johnson gives interviews and still talks passionately about the game of football.

John Terry had been stripped of the captaincy by Capello leading up to the World Cup following an affair with Wayne Bridge’s former partner. (just to cut down on uses of ‘having’ is all)

He still got the nod at centre-back for the match against the USA, however.

Terry worked with Aston Villa for a few years but left back in July last year. He’s been working for beIN Sports at the tournament so far, though caused controversy alongside Richard Keys by saying it was time to ‘focus on the football’.

Ledley King was a brilliant defender back in the day – when he was fully fit.

With Rio Ferdinand sidelined, having picked up an injury prior to the tournament started, the Tottenham icon was started alongside Terry at the back.

King performs punditry duties and, recently, praised Antonio Conte for the work he was doing in north London.

Was there a better left-back than Ashley Cole during the peak years of his career?

Probably not. He excelled for Arsenal and Chelsea and, though he had a brief spell at Roma, that shouldn’t tarnish everything he achieved.

He now works alongside former team-mate Frank Lampard at Everton, while he’s also appeared on Sky Sports during the course of the World Cup so far.

After Terry’s shocking affair with the former partner of Bridge, Gerrard then became captain for the World Cup in South Africa.

He certainly was a positive for the Three Lions against the USA, putting them ahead with just four minutes on the clock.

Gerrard is currently unemployed as a manager, having been sacked by Aston Villa last month. He’s being tipped for a return to Rangers, especially with that hotseat now free.

Lampard and Gerrard sounded like a world-class midfield on paper. Certainly, both players were among the very best their generation had to offer.

The 44-year-old won every major trophy at Chelsea and, since hanging up his boots, took over Derby and the Blues.

Lampard is now manager at Everton but it’s a tough job at Goodison Park and there’s a sense he could soon be out of work by the time the season comes to an end.

David Beckham had been expected to start on the right for England when they met USA 12 years ago, having won Capello round.

Yet injury struck and the former Manchester United, Real Madrid, LA Galaxy, AC Milan and PSG star instead joined Capello and his coaching team on the bench.

Aaron Lennon was then picked in his place. He was playing until recently but retired from football at the end of last season following Burnley’s relegation to the Championship.

One player who is still playing these days is James Milner.

Though the midfielder isn’t the same player he used to be, he’s still a useful asset for Jurgen Klopp over at Anfield.

Milner is, however, a player on the wane. His last England appearance came back in 2016 and he’s made 61 appearances for his country.

Wayne Rooney went into the 2010 World Cup with a slight injury doubt having sustained a knock prior to the tournament commencing.

It was to be a frustrating tournament for the Manchester United icon, who didn’t find the net during his four appearances.

Rooney is now manager of DC United in the MLS, having done well during a turbulent stint at Derby last season.

Emile Heskey was often mocked when he played for England, despite being a useful player for every manager he played under.

The 44-year-old netted seven goals from 62 appearances for his country.

Today, Heskey is available for interviews and has been opening up about Liverpool amid FSG’s desire to sell the club.