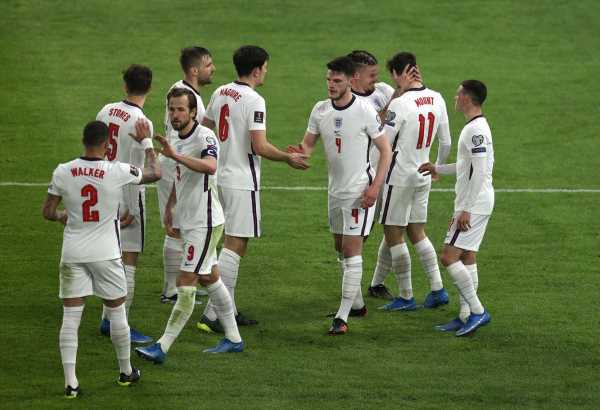 Two wins, two clean sheets – but the real test of this international break is now upon England as they host Poland, the team seen by most as the most likely challenger to the Three Lions.

Gareth Southgate’s side will be firm favourites all the same in this 2022 World Cup qualifier, especially with Robert Lewandowski out injured for Poland. The visitors have also had a further two players ruled out after positive coronavirus tests.

Poland are ranked 19th in the world by Fifa; the last time England lost to a side outside the top 10 was in October 2019, when Czech Republic inflicted the only loss of the Euros qualification campaign on Southgate’s men.

Since then it has been far from entirely convincing for England, who have also lost to Denmark and Belgium in the ensuing period – but of their 10 wins in the same time frame, nine have been achieved without conceding a goal. The manager will hope that same mix of defensive resilience and ability to find a goal or two will be enough to move to nine points in the group.

The game kicks off at Wembley at 7:45pm BST on Wednesday, 31 March.

The match will be shown live on ITV, while viewers can also stream the match via the ITV Hub.

Southgate confirmed that Mason Mount is fit and ready as needed, meaning England have a full squad to choose from – though Marcus Rashford and Bukayo Saka have already been sent home injured earlier in the week. Only goalkeeper Nick Pope has played all 180 minutes of the two games so far this international break.

Poland are without striker Robert Lewandowski, who has a knee injury and will be sidelined for a month. Third-choice goalkeeper and young defender Kamil Piatkowski have both tested positive for coronavirus and will be unavailable.

It will be far from one-sided, but the Three Lions should have enough to emerge triumphant if the attacking intent is present in their game. England 2-0 Poland.