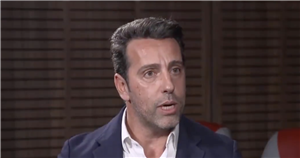 Arsenal technical director Edu has complete faith in the club's forwards and believes two of them are capable of scoring at least 40 goals combined this season.

The Gunners were not shy of splashing the cash during the summer, lamping out over £150million on new signings, but have made their worst start to a season in 67 years and sit rock-bottom of the Premier League table.

Worse still for boss Mikel Arteta, the north Londoners have failed to find the net against Brentford, Chelsea and Manchester City.

By the end of their match against the champions, Arsenal had managed just a single shot – off target – and 19 per cent possession.

Their dismal start to the season has raised question marks over whether they would have been better off spending some of that £150million on fewer, more established players, rather than a crop of youngsters for the future.

Asked about the club's transfer approach, and whether spending big on a player like Romelu Lukaku might have been a smarter avenue to go down, Edu told Sky Sports: "The case here is we really believe in the players we have in the squad.

Do you think Arsenal should have signed a new striker during the summer transfer window? Let us know in the comments section.

"Maybe other people don’t but we do. If we start to see the squad together, we believe in the squad.

"I sit with Mikel and we see the squad. We have a striker [Aubameyang] there who delivers to us 25 goals every single season.

"We have another one [Lacazette] who delivers 15-20 goals every season.

"We have two very powerful young players from the academy in Saka and Smith Rowe. We believe in them and our squad."

Despite Edu's faith in Aubameyang and Lacazatte, the numbers tell a slightly different story.

Last season the Frenchman netted 13 times while Arsenal's skipper bagged just 10 goals – a far cry from the 40 goals Edu believes they're capable of.

Both men did find the net in last month's 6-0 Carabao Cup mauling of West Brom, but Arteta really needs them to find their scoring boots in the Premier League – and fast.

Edu, meanwhile, also discussed concerns over the club's decision to sign up-and-coming players over readymade stars, adding: "I really understand that, but I’d also like them to understand the reason and the direction we are going as a club.

"I understand the situation we are in now is really tough. It’s not an excuse but let’s judge the team when they play together."