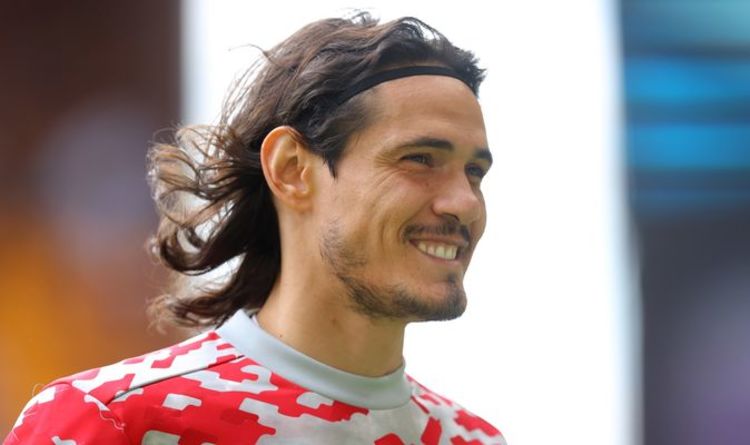 Manchester United striker Edinson Cavani has suggested that he would like the club’s supporters to continue singing his old song from now on, admitting that his new chant is difficult to follow. The Uruguayan midfielder’s previous song was changed shortly before the arrival of Cristiano Ronaldo, who rejoined the club on deadline day.

The mercurial 36-year-old signed a two-year deal with the option of a third before making a splash on his second debut against Newcastle United.

He opened the scoring before half-time with a tap-in after Mason Greenwood’s shot was parried into his path by Magpies stopper Freddie Woodman.

Ronaldo went on to put United back in front with an exquisite two-touch finish after Javier Manquillo had equalised for the visitors.

The five-time Ballon d’Or winner took the No 7 shirt from Cavani upon his arrival at Old Trafford, with United fans set to alter the latter’s song as a result.

His previous chant was sung to the tune of Abba’s Gimme Gimme Gimme, with the lyrics as follows: “Give it, give it, give it to Edi Cavani, pass him the ball and watch him score all the goals!”

Meanwhile, Cavani’s new chant includes a reference to the veteran forward’s old No 7 shirt number, which has since been changed to 21.

When quizzed on which song he prefers by MUTV, Cavani hinted at a preference for the original arrangement, admitting that he is not as keen on his new one.

“The fans have now come up with a second song, which is a lot more difficult to sing than the previous one,” said the 34-year-old.

“I could follow the first one: ‘Give it, give it, give it to Edi Cavani…’. It was easier to follow, and I could sing along to it in places!

“This second one, which is also really cool and really good too, and right here let me take a moment to thank all the United fans for their warmth and affection, this second song is much more difficult to sing!”

The words of Cavani’s new chant will need to be tweaked slightly due to the arrival of Ronaldo, who recently thanked his new team-mate for handing over the iconic No 7 shirt.

“I wasn’t sure if it would be possible to have the number seven shirt again, so I would like to say a huge thank you to Edi for this incredible gesture,” he said.

Cavani missed United’s win over Newcastle on Saturday after suffering a muscle injury in their behind-closed-doors friendly with Stoke City during the international break.

His debut season at Old Trafford was marred by a number of injury problems, with the striker declaring himself unfit for certain games in February and March even though the club’s medical department had cleared him to play.

Ole Gunnar Solskjaer revealed ahead of Tuesday’s trip to Young Boys in the Champions League group stages that Cavani will remain sidelined for the fixture as he continues to step up his recovery.

“Edi is hopefully back with us soon,,” the United boss told reporters on Monday.

“He had a slight strain in the international week after the in-house game, he’s working hard to get back.”