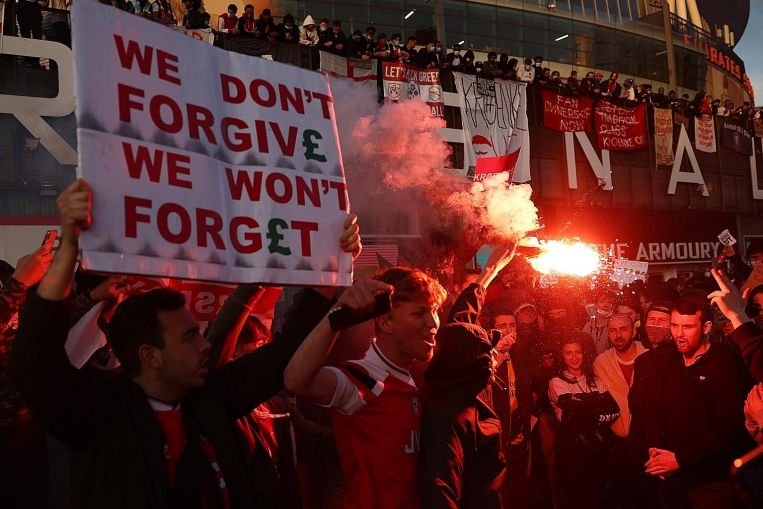 LONDON • For 48 hours, football stood on the brink. Fans took to the streets. Players broke into open revolt. Chaos stalked the game’s corridors of power, unleashing a shock wave that resonated around the world.

That internationalism is what has turned European football, over the last 30 years, into a global obsession.

The elite teams are stocked with many stars drawn from Africa, South America and all points in between. They draw fans in numbers large enough to tempt broadcasters across the planet to pay hundreds of millions of dollars for the rights to show their games.

But while football is now arguably the biggest business in sports, it remains, at heart, an intensely local affair.

Teams rooted in neighbourhoods and based in small towns compete in domestic leagues that have existed for more than a century, competitions in which the great and the good share the field – and at least some of the finances – with the minor and the makeweight.

An uneasy truce between the two faces of the world’s game had held for decades.

And then, last Sunday night, it cracked as an unlikely alliance of US hedge funds, Russian oligarchs, European industrial tycoons and Gulf royals sought to seize control of the revenues of the world’s most popular sport by creating the closed European Super League tournament.

How that plan came together and then spectacularly collapsed is a story of avarice and ambition. It lasted just two days, but more than enough time to shake the world.

The previous Thursday, La Liga chief Javier Tebas and Joan Laporta were supposed to be having a cordial, celebratory lunch. Laporta had been elected to a second term as Barcelona president last month.

Tebas wanted to congratulate him on his victory but it did not turn out that way. Laporta revealed to Tebas that Barca was joining the breakaway European Super League, one that would effectively unmoor its 12 permanent members from the game’s traditional structures and its multi-billion dollar economy.

The threat was nothing new. Rumours of a rogue elite competition in the pipeline had long been rife. But Tebas knew this new effort was more serious and raised the alarm, reaching out to Uefa president Aleksander Ceferin, whose organisation had the most to lose.

The reason that the threat of the Super League had carried so much menace for so long is that much of football’s vast economy rests on a fragile bond.

Domestic leagues – like the English Premier League and Spain’s La Liga – and the Champions League rely on the presence of the elite clubs to attract fans and, through them, broadcasters and sponsors.

Without them, the revenue streams that filter down to and sustain smaller teams might collapse.

For decades, the system rested on appeasing the rich teams just enough to encourage them to retain their loyalty to the collective.

All of a sudden, that trust was fraying. With his inner circle, Ceferin told the clubs, even though the 12 breakaway teams intended to remain in their own domestic leagues, the plan would see the value of those competitions’ broadcast deals collapse.

Sponsorships would evaporate and it would decimate the rest of football’s finances.

“They were outraged. They couldn’t believe it,” Ceferin said last Wednesday on “The Dirty Dozen”. “Even mafia organisations have some sort of code.”

The public outcry, particularly in Britain, was immediate, once the plans were made public.

The financing, delivered by advisory firm Key Capital Partners and backed by JPMorgan Chase, would mean billions in new riches.

But it was quickly clear that the breakaway 12 had next to no support and the acrimony was spreading across European football.

TV networks and sponsors had come out against the proposal and the British government was threatening official action to block it.

At Uefa’s congress on Tuesday, Ceferin talked about greed and selfishness but also about football’s importance in the fabric of European culture and in the lives of the millions who follow the game.

Within hours, the project’s demise started to snowball. Manchester City were the first to break ranks officially, releasing a statement saying it was pulling out.

The other five English clubs followed, before Inter Milan, AC Milan and Atletico Madrid dropped out as part of the domino effect. The Super League, having lost nine of its members and its entire foothold in England, was finished.

But is it really gone for good? The underlying reasons for the breakaway have not gone away.

The 12 clubs are unhappy with the way Uefa runs the Champions League and how it distributes revenue generated from its competitions. It has long been a sticking point as the elite teams feel entitled to a bigger portion of the €2.04 billion (S$3.3 billion) that was handed out by Uefa in the 2019-20 season.

Had the Super League taken off, 32.5 per cent of commercial revenues would have been evenly shared, with a further 32.5 per cent once it became a 20-team event.

The clubs also do not feel the current format delivers enough high-quality entertainment in the group stage and second round, with Real Madrid president Florentino Perez – who was earmarked as the first Super League chair – saying it was “old and only interesting from the quarter-finals onwards”.

With Uefa expanding the number of teams to 36 from 2024, not only will revenue get more diluted but it likely means more pedestrian games, feeding into the existing gripes.

Money is another issue for the 12 clubs.

Between Barca and Real, both clubs had combined debt in excess of US$1 billion (S$1.33 billion) up till June last year, and their financial position has only worsened amid the Covid-19 pandemic, which has kept fans out of grounds for over a year.

Perez has warned that clubs face bankruptcy if changes are not made and while it might have been fear mongering, the Super League was meant to address those concerns.

Not only was there an initial €3.5 billion shared pot – more than what Uefa generated in 2019-20 – with more solidarity payments as the league grew but a collective agreement was in place to limit spending on salaries and transfers to 55 per cent of their revenues.

The Super League plan failed because it was deemed at odds with football’s working class roots, but Uefa’s reformat of the Champions League has not addressed the bugbears, which gave rise to the plan.

The project is dead for now but if the Super League clubs can come up a better alternative to Uefa’s solidarity payments, which are given to clubs to invest in their youth development programmes and local community schemes, and change the “closed” format to a more inclusive one, it would lend credence to Perez’s belief that the competition can “save football”.