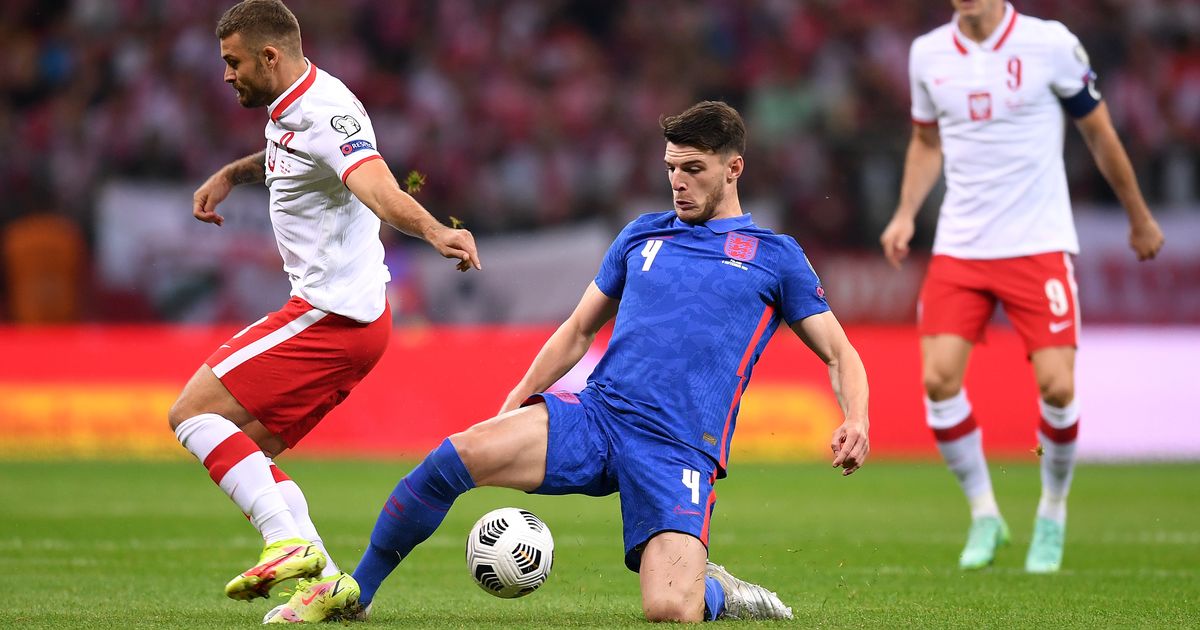 DECLAN Rice has been compared to everyone from N’Golo Kante to Franz Beckenbauer.

But the England midfielder is very much his own man – and continues to prove he’s one of the first names on Gareth Southgate’s teamsheet.

There are those who say he’s outgrown West Ham and needs to move to a bigger club. That he should be playing Champions League football.

But that ignores how far he has come under the guidance of Hammers boss David Moyes – and how much he thrives in a team where he plays every game.

Harry Kane wasn’t the only England player who failed to get the move he wanted this summer.

Rice too flirted with the idea of leaving his club, refusing to sign a new contract at West Ham and asking to be kept informed of any bids for him.

In the end, none came. But Rice hasn’t sulked, and he hasn’t looked distracted or unhappy either.

Instead, he’s looked better than ever, and is becoming a symbol of the toughness at the heart of this England team.

Jordan Pickford and his back four are not the only reasons this team rarely concedes goals.

Is Declan Rice England's most important player? Let us know in the comments section.

Rice and his midfield sidekick Kalvin Phillips are just as important, and both were restored to the starting line-up for this one.

Poland away is exactly the kind of game where you need your warriors, and Rice is certainly that.

Against Hungary in Budapest he made himself a cult hero with his arms-spread-wide defiance in the face of a flare thrown on to the pitch.

He was in the thick of it here too, making a key early interception to deny Robert Lewandowski a one on one and generally mopping up in front of his back four.

One minute he was cutting out the danger in his own box. The next he was storming forward into the opposition’s.

An outstretched boot just before half time robbed Poland of another shooting chance inside the area.

When he first broke into the England team he was a starstruck youngster with a lot to learn.

Now he’s demanding the ball, shutting down danger and leading by example. He wouldn’t be out of place at Old Trafford or Stamford Bridge.

But it feels like he is in the right place at London Stadium playing for a team who, just like England, think he’s indispensable.

If Rice hadn’t got injured at a key time last season, he could be playing in the Champions League already. At this rate, he won’t have to wait long for that honour.

And England have never won a World Cup without a key contribution from West Ham, have they? Roll on Qatar…