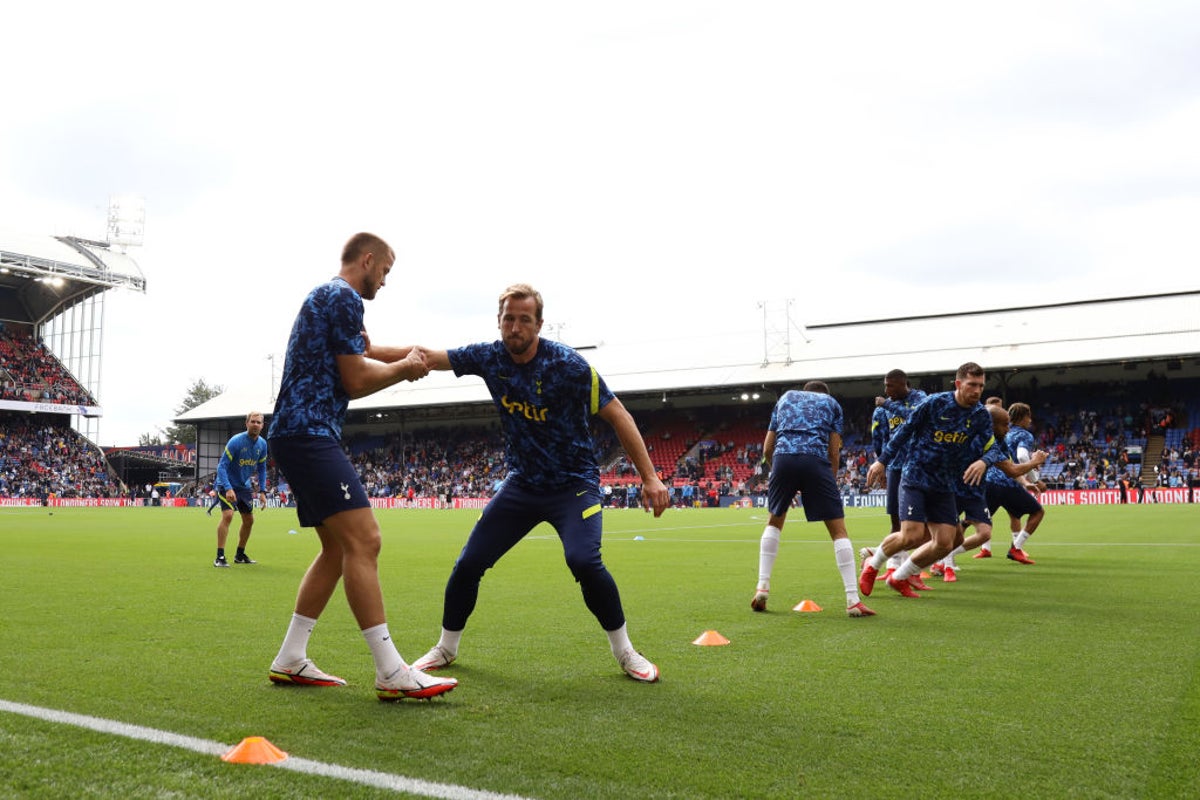 Follow all the action as Crystal Palace host Tottenham in the Premier League’s early kick-off this afternoon.

Spurs sit top of the Premier League with a perfect record this season, having defeated Manchester City, Wolves and Watford thus far, but will have to make do without Cristian Romero, Giovani Lo Celso and Davinson Sanchez, who are all unavailable after travelling to South America during the international break. There are also doubts over the fitness of Son Heung-min and Oliver Skipp, with Nuno Espirito Santo likely to be forced into several changes as he aims to continue the brilliant start to his tenure.

There has been less cause for celebration for Patrick Vieira, who has taken two points from his first three games in charge at Crystal Palace. There were clear signs of improvement against West Ham before the break, though, as Conor Gallagher scored twice, while new signings Odsonne Edouard and Michael Olise could make their debuts. Follow all the action live below:

1 – We’re underway in south London with Crystal Palace in red-and-blue stripes and Spurs in white.

A minute’s silence is currently taking place at Selhurst Park to commemorate the 20th anniversary of the 9/11 terror attacks.

All other Premier League fixtures this afternoon will involve the same process.

A quick reminder before kick-off of the two starting elevens thus afternoon:

Players are out at Selhurst Park in big atmosphere

Patrick Vieira is looking for his first Crystal Pace win in front of the home crowd at Selhurst Park and they’re making themselves heard already as the players make their way onto the pitch.

We’ve had full crowds back for a good few weeks now but it’s still glorious hearing the roars and seeing the joy on people’s faces in stadiums around the country.

Palace boss Patrick Vieira has stuck with the same line-up as their previous outing away at West Ham, despite bringing in Odsonne Édouard and Michael Olise at the end of the transfer window, and has been explaining his reasoning to BT Sport:

“I was really pleased with the performances [against West Ham] so there wasn’t any reason for me to change it. The players on the bench are ready to come on and help the team.

On the threat posed by today’s visitors, Vieira added: “[Harry] Kane is one of the best forwards in the league and in Europe. But Tottenham is all about the squad, he is scoring goals because the team is playing well.

Nuno Espirito Santo has been talking to BT Sport about the impact of the issues created by the quarantine period his Argentinian players Cristian Romero and Giovanni Lo Celso are having to undergo post-international break.

“The most difficult is the the opponent”, said Espirito Santo. “And then all the issues we have which everyone is aware of. They [Argentinians] are training in Croatia and will arrive the day before we play Chelsea.

On Emerson Royal’s start, he added: “Due to the circumstances we have to use all the squad. W. think he has the quality to help the team. He is an offensive full-back with experience.”

Spurs have yet to concede a goal so far this season, of course, winning all three of their previous matches by a single goal to take nine points from nine under their new boss. That’s three wins and three clean sheets to start the season for the first time in the club’s history.

Espirito Santo built his Wolves side in a similarly resolute mould and the blueprint is working in his new role so far, but it’s a slightly makeshift back-line for the Lilywhites today with Japhet Tanganga moving into centre-half from the right-back slot and late summer signing Emerson Royal earning a first start in his place.

Matt Doherty has been dropped from the team to make way for the former Barcelona man and it will be fascinating to see whether the the bedding-in period goes smoothly or not.

Dele Alli’s Tottenham career stalled after the arrival of Jose Mourinho, but the 25-year-old has played the full 90 minutes all three of his side’s Premier League fixtures since Nuno Espirito Santo took charge this summer.

The former MK Dons midfielder scored the winner from the penalty spot against Wolves at Molineux a few weeks back and will no doubt have his sights set on a return to the England squad with more World Cup qualifiers coming up in October and November.

Son Heung-Min misses out for Spurs due to an injury suffered on international duty, meaning Alli is set to start on the left of the front-three at Selhurst Park.

Where will Palace find goals this afternoon?

Palace have only scored twice in three Premier League matches so far this season, with both coming courtesy of on-loan Chelsea midfielder Conor Gallagher in the 2-2 draw with West Ham United.

Christian Benteke starts today and managed to score 10 last season, with summer signing Odsonne Édouard on the bench after being brought in on transfer deadline day, meaning today’s frontline doesn’t possess tons of goal threat from the off.

Patrick Vieira could well require more goals from midfield like those Gallagher notched against the Hammers if his side are to have a successful afternoon.

Emerson makes debut but Son out

Emerson Royal goes straight into Tottenham’s starting XI while Oliver Skipp starts too after doubts over his fitness. Son Heung-min is confirmed as being unavailable due to a calf injury and is not included in the squad.