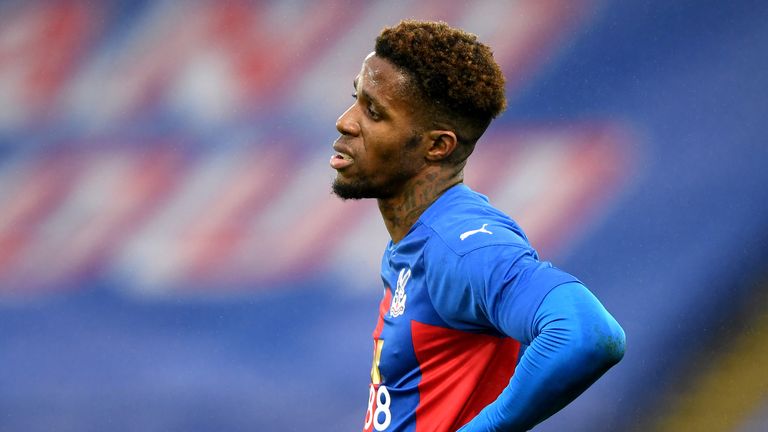 Team news, stats and prediction ahead of Crystal Palace vs Man Utd in the Premier League on Wednesday (kick-off 8.15pm).

Jeffrey Schlupp and Connor Wickham will be back to boost Crystal Palace when they host Manchester United in the Premier League on Wednesday.

The duo are fit again after hamstring and thigh injuries respectively but manager Roy Hodgson will be without full-backs Nathaniel Clyne and Tyrick Mitchell due to knocks.

Nathan Ferguson (knee) and Wilfried Zaha (hamstring) are closing in on returns, while James Tomkins (eye), Mamadou Sakho (thigh) and James McArthur (muscle) are not expected to be back until April at the earliest.

Edinson Cavani could return for Manchester United at Selhurst Park.

The 34-year-old striker has missed four matches with a muscle complaint but boss Ole Gunnar Solskjaer expects him to travel to south London.

Crystal Palace vs Manchester United is live on Sky Sports Premier League and Sky Sports Main Event from 8pm; Kick-off 8.15pm. Sky Sports customers can watch in-game clips in the live match blog on the Sky Sports website and app. Highlights will also be published on the Sky Sports digital platforms and the Sky Sports Football YouTube channel shortly after the final whistle.

Manchester United remain unbeaten with a club record 20 league away games since slipping to defeat to Chelsea over a year ago. Brighton, Burnley, Everton, Fulham, Newcastle, Sheffield United, Southampton and West Ham have been swatted aside by United this season on the road – and it’s unlikely Palace will have the attacking bravery to give them too many problems. I’m happy to play the away win.

Ole Gunnar Solskjaer must have tremendous faith in Mason Greenwood. Despite only scoring one Premier League goal in 1098 minutes of action this season, he was handed the opportunity to lead the line in an important match at Chelsea. That faith will surely be rewarded in the long-term, starting at Selhurst Park, where the youngster looks a fine bet to get on the scoresheet at 2/1 with Sky Bet if playing in the same central role as he did at Chelsea.

The 19-year-old remains a frightening talent, whose finishing ability mirrors that of former United favourite Robin van Persie. There were positive signs at Stamford Bridge that a goal-glut might just be around the corner. Against that miserly defence, Greenwood flashed a terrific strike inches past the post in the second half after linking with Bruno Fernandes. You get the feeling Crystal Palace will be more accommodating to awarding the striker space to play in and the 2/1 for him to score looks overpriced to me as he bids to get back to a goal ratio that stood at 0.69 per game last season.