Trick or treat? Cristiano Ronaldo’s family get into the Halloween spirit by donning scary masks

Crsitiano Ronaldo has celebrated Halloween by posting a ghoulish photo to social media – and got his entire family involved too.

The Juventus forward posted a picture to Instagram of him wearing a spooky clown mask, along with his girlfriend Georgina Rodriguez and his four children.

Rodriguez donned latex headwear resembling Dracula as portrayed by Gary Oldman in the 1992, while his eldest son Cristiano jr wore a scary mask with a black wig and pointed teeth. 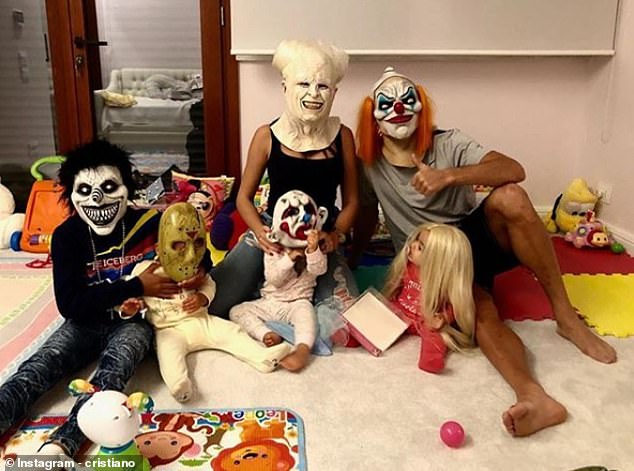 Ronaldo’s infant twine, Mateo and Eva, were also masked, while the youngest, Alana – who Rodriguez gave birth to in November last year – was not put in a face covering, but was dressed up nonetheless in a long blonde wig.

While Ronaldo played a scary trick here on Instagram, his time at Juventus this season after signing in the summer has been a treat for the Serie A club.

After an initial slow start, Ronaldo has scored seven goals in 10 league matches – a feat not achieved in the last 61 years. 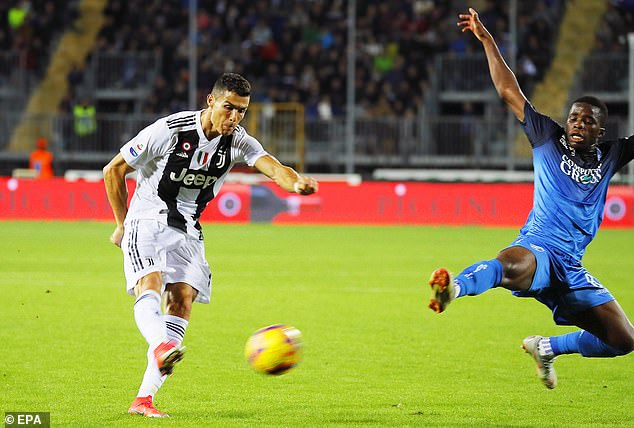 While Ronaldo played a trick on Instagram, his start to life with Juventus has been a treat

Not since Welsh football legend John Charles in 1957 has a Juve player had such an excellent start to their scoring career.

Off the field, however, things have been less serene for Ronaldo, who has had to strenuously deny allegations of rape.

Kathryn Mayorga claims Ronaldo raped her in a Las Vegas hotel room in 2009 and then used ‘fixers’ to stop her pursuing criminal charges, including paying her $375,000 in ‘hush money’.

Last week Ronaldo said in an interview that the story ‘is interfering in my life’, but that ‘the truth will out one day, and the people who criticise me or seek to expose my life today, who make it into a circus, these people will see.’