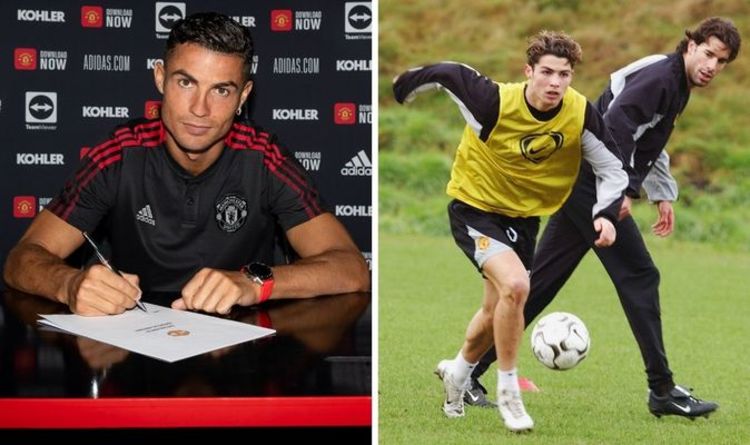 Cristiano Ronaldo could make his second Man Utd debut this afternoon as the Old Trafford giants face Newcastle United. CR7 sealed an emotional return to Manchester on deadline day as the Red Devils made a late swoop to stop bitter rivals Manchester City from signing him. The deal, believed to be worth around £12.8million, has already been justified as shirt sales have already topped a whopping £187million.

Tickets for this afternoon’s match, which will not be televised due to the Saturday 3pm blackout here in the UK, are selling for a reported £2,500 as fans desperately try to watch a historic return.

Ronaldo’s last spell at Man Utd was between 2003 and 2009, during which he won three Premier League titles, three FA Cup winners medals and a Champions League.

Off the pitch, however, it wasn’t always easy.

His father, Jose Dinis Aveiro, died of an alcoholism-related liver condition in September 2005 when Ronaldo was just 20.

Ronaldo does not drink alcohol and follows a strict fitness regime to keep him in phenomenal shape.

He said: “Ruud had that kind of ego: he wanted all the passes.

“And sometimes, for the development of Cristiano Ronaldo and Wayne Rooney, it was difficult for the manager to deal with.

“Did Ruud make Ronaldo cry? Yeah, there were stories because I think they ended up in an argument at the moment when Cristiano’s father had passed away, so it wasn’t the right moment.

“Things like that happen when two players have lots of spirit, but I’m sure Ruud regrets some of his words.”

He shed light on the row in his book: “The last straw was when he told Cristiano Ronaldo he had found a new dad in Carlos [Queiroz, Sir Alex’s assistant] just after Ronaldo’s dad, who was an alcoholic, had died.

“Carlos asked him to show respect and he said he didn’t respect anyone there. He later apologised but CR was not having it.

“Alex sent Van Nistelrooy home when he heard about it later. He was not sure what he was going to do with him.”

Van Nistelrooy, who scored 95 times for Man Utd, left the club in 2006 to sign for Real Madrid. He fell out with his manager after he was dropped for the 2006 Carling Cup final win over Wigan Athletic, and “called him a number of things in a blind rage”.

Van Nistelrooy has since admitted his behaviour in the Ronaldo incident was wrong.

Speaking to Rio Ferdinand during Vibe with FIVE, he said: “I know that I was wrong in that situation.

“That incident led to a discussion with Cristiano. Of course, you need to realise then and you have to be big enough to acknowledge that.”

Although Van Nistelrooy left Old Trafford on bad terms with Fergie, he confirmed in a 2011 that he personally apologised.

He explained to Voetbal International that he had been thinking about it “two or three times a year” and discussed it with his wife.

He said: “My wife suggested I [send] Ferguson a text to see if he was willing to talk and when I sent him a message asking if I could ring him he replied to say: ‘OK, call me at this date and time.’

“I rang him and he answered and said: ‘OK, fine, go ahead.’ I said I wanted to apologise for what had happened and he replied: ‘Fine, I appreciate that, when we meet again it will be OK.’ That was great to know.”