Cristiano Ronaldo looked focussed on the task at hand as he completed a final training session with Juventus ahead of his highly-anticipated return to Manchester United.

The Portuguese is set to line up against his former club in the Champions League on Tuesday after coming through training at Juventus’ Turin base on Monday morning.

Ronaldo remains a revered character at Old Trafford after originally emerging as one of the world’s foremost players under the stewardship of Sir Alex Ferguson between 2003 and 2009. 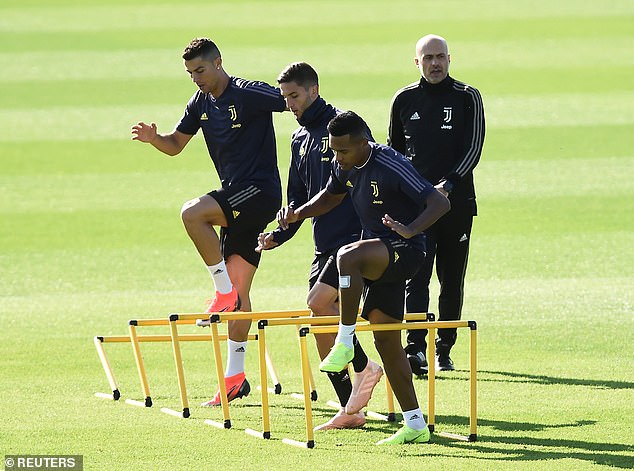 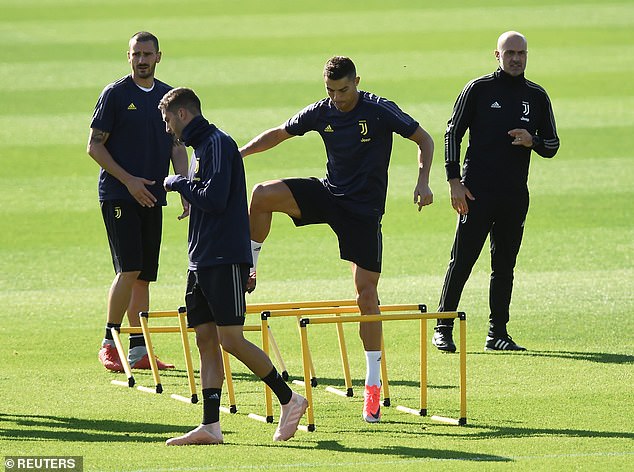 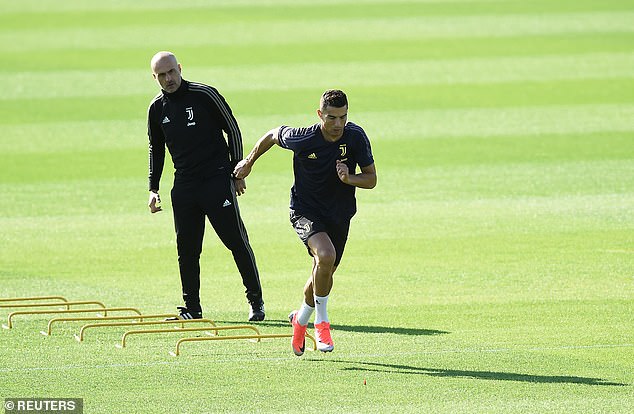 Ronaldo, 33, completes a sprint as a Juventus coach keeps close watch during the session

In a trophy-laden six-year spell, Ronaldo scored 118 goals in 292 appearances before departing for Real Madrid in a then-world-record deal worth £80million. Since then, he has regularly been linked with a return to the club.

However, his chances of playing in the red shirt of United appeared to evaporate this summer when he joined Juventus. He will now look to put a dent in their Champions League ambitions to benefit his own.

Training alongside Paulo Dybala and Leonardo Bonucci among others on Monday morning, the 33-year-old appeared unperturbed by the recent turmoil in his personal life, in which he has been accused of rape by model Kathryn Mayorga. 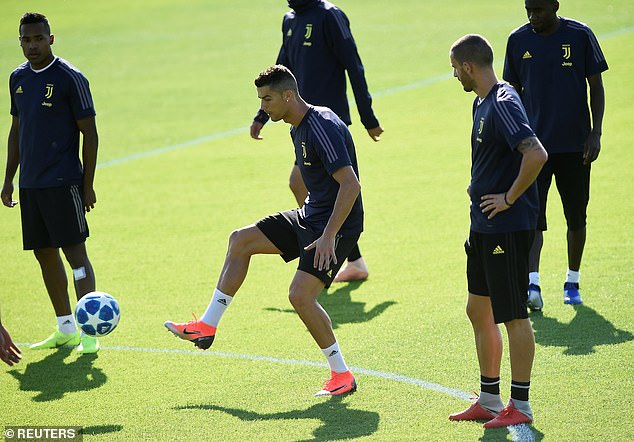 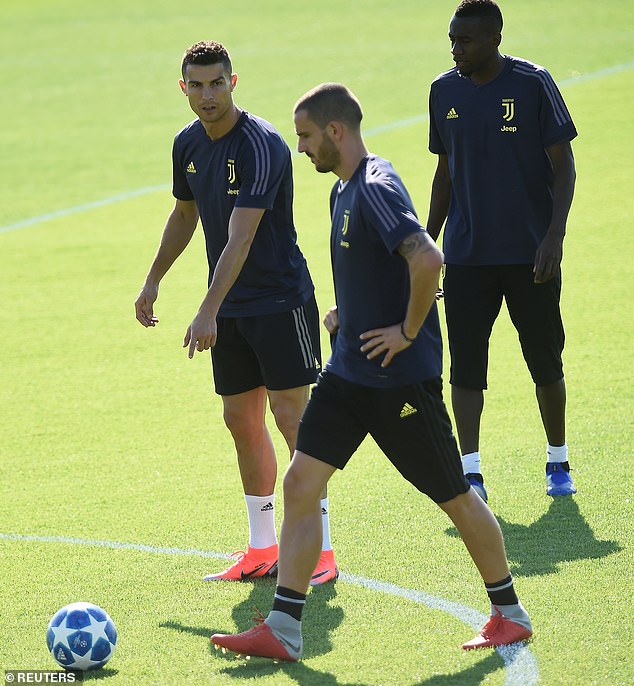 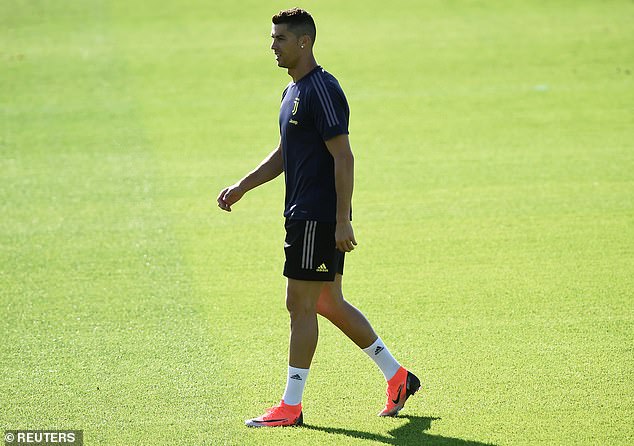 Ronaldo vehemently denies the allegations put against him by the American model, who claims she was raped by the footballer in a Las Vegas hotel in 2009 and then paid £288,000 to sign a non-disclosure agreement.

Details of the alleged incident, which Ronaldo dismissed as ‘fake news’, emerged shortly after his £100million move from Real Madrid. Juventus committed around £250m to sign the five-time Ballon d’Or winner when accounting for transfer fees and wages and have since given him their full support.

Shares in Juventus have fallen by 37 per cent since Las Vegas police said they would re-investigate the alleged crime, while one of Ronaldo’s principal sponsors, Nike, have said they are ‘deeply concerned.’

Ronaldo maintains that what happened in the aftermath of a night of drinking in a Las Vegas nightclub was consensual while his lawyer has said the non-disclosure agreement with Mayorga was ‘by no means a confession of guilt’. 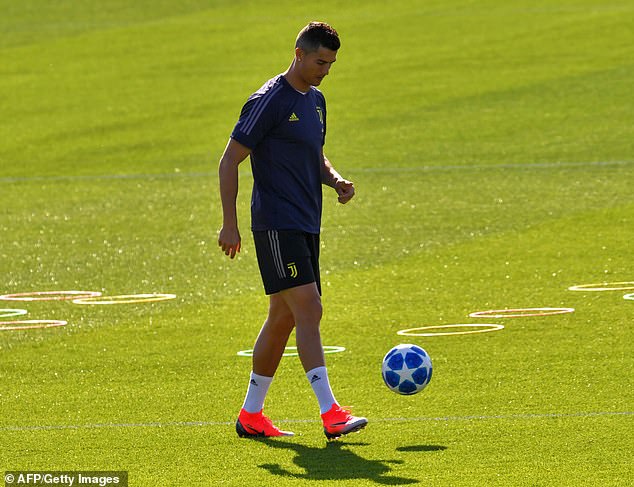 In the most recent development, Ronaldo’s elder brother dismissed the allegations as ‘rubbish’ and says his home island of Madeira ‘will stand behind him’.

Hugo Aveiro, 43, who still lives in the island’s capital Funchal and runs the CR7 Museum, told The Times: ‘My brother is a hero in Madeira. He has a big impact here because he’s done a lot for the island.

‘Around half a million people come to the [CR7] museum each year. My brother comes back usually for New Year’s Eve because it’s our mother’s birthday, there are lots of fireworks, although this year he might be here or Dubai.

‘People here are defensive of him because everyone knows him. The local news is only saying good things and the people will stand behind him. He is an icon of Madeira.’ 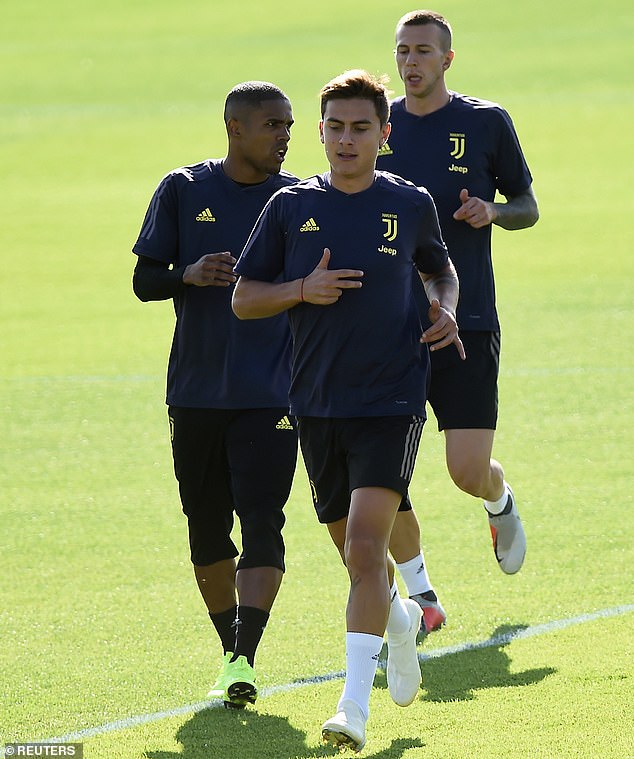 Front to back: Paulo Dybala, Douglas Costa and Leonardo Spinazzola jog during the session