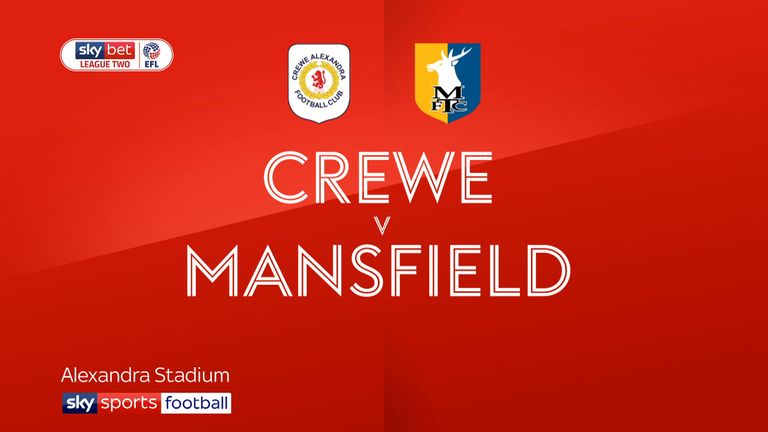 Timi Elsnik fired in a first-half double for Mansfield who extended their unbeaten run to eight games with a comfortable 3-0 win at Crewe.

Slovenian loan midfielder Elsnik was joined on the scoresheet by another of the Stags’ loan men, Tyler Walker, as Dave Flitcroft’s side moved up to ninth in the table.

The visitors got off to a flying start when Derby youngster Elsnik latched onto a pass from Jacob Mellis and drove low into the bottom corner from the edge of the box in the sixth minute.

Walker, on loan from Nottingham Forest, should have doubled the lead when he seized the ball off Crewe skipper George Ray, but fired into the side netting.

But Elsnik was not wavering as he plundered his second in the 35th minute when he took Danny Rose’s pass and thumped the ball into the top corner from 20 yards out.

Crewe had chances to stay in the game, notably when Shaun Miller prodded a Harry Pickering cross wide at the near post with the goal at his mercy and when Charlie Kirk, put clear by Miller, shot tamely at Mansfield goalkeeper Bobby Olejnik.

After the restart Olejnik pushed out a fierce angled drive from Crewe fullback Corey Whelan. But Mansfield turned the screw again with CJ Hamilton breaking down the left to set up Walker, who backheeled the ball in from close range.

Hamilton, who shot wide, and Elsnik – who was denied a hat-trick by Ben Garratt’s save – could have added to their tally.