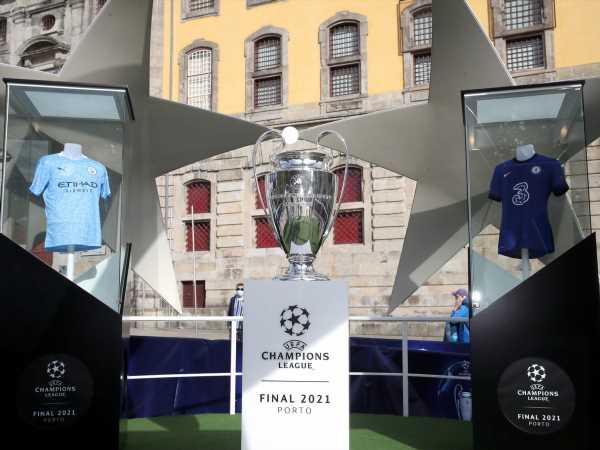 In the last few days, Pep Guardiola has been talking about a unique excitement, that he hasn’t felt in a decade. For Thomas Tuchel, it’s been a year, but that atmosphere in Lisbon wasn’t quite what his Manchester City counterpart meant. The two have already discussed it privately.

The compromised nature of last year’s Champions League final, where Manuel Neuer lifted the trophy to empty stands, is not what this competition is supposed to be about. The return of supporters restores emotion, and meaning. This is what club football’s greatest fixture is supposed to be about. This is what Guardiola has been talking about, as so many fans made their way to Porto in hopeful anticipation.

The magic of the fixture brings out a childlike enthusiasm in even the most sardonic or cynical football figures. The idea of missing out on it was what brought out the most anger in Guardiola on learning about the Super League. Like Sir Alex Ferguson and Tuchel, the City manager found himself thinking about his childhood memories of the competition, of his own history in it.

It is one of the deceptive and divine truths about games as great as this. For all the financial and political obscenities of the modern game, for all the fair reservations about the modern Champions League itself, all of that evaporates like flare smoke in the air once the whistle blows on such a match.

It isn’t a game for emirates or oligarchs or any of the other interests that have attached themselves to the sport and sought to appropriate it. It is for the people and the players, a pinnacle to aim for. This was something the Super League missed. It isn’t just some media event, even as the whole world tunes in to watch.

It is so many shared memories, from Alfredo Di Stefano through to Marco Van Basten, Ronald Koeman to Guardiola’s own great Barcelona in 2011, and Chelsea’s own eventual champions a year later. These are the images that have inspired so many of the players from both sides, and created that preciously rare tension on the eve of a great game. Every moment of it is weighted by decades of mythology.

As much as it is history that enriches the occasion, this 66th European Cup final greatly captures football’s present, while indicating the future

It would have had a completely different complexion had the Super League plot actually succeeded, and it is some way symbolic that this year’s Champions League final features the two clubs that were first to withdraw. Those decisions were connected to the fact that City and Chelsea are the most financially secure of the big clubs, due to their ownerships. It is similarly no coincidence that the finalists are the two biggest spending clubs of last summer, as a pandemic ravaged the economy of the rest of the game. A sign of their strength in depth is that some of the most expensive recent signings – such as Nathan Ake, Ferran Torres, Hakim Ziyech and perhaps Kai Havertz – may not even start. That financial and political context cannot be ignored, even though it evidently makes so many people uncomfortable.

The clubs fundamentally exist for the local support, who make the occasion, but everything that happens on the pitch is directly influenced by the ownerships to a greater degree than ever before.

This first ever final between “oil clubs” does mark a watershed for the game, and a vision of the future. This also reflects some of the motivations behind the Super League, since so many “old money” clubs were concerned they couldn’t compete with such owners without new sources of revenue. To show just how far away from the football establishment we’ve got, there hasn’t been a final pairing with fewer previous European Cups – one between the two clubs – since 1992, and the founding of the modern Champions League. That was when Sampdoria were defeated by the Barca that featured Guardiola the player.

That statistic is almost certain to starkly change over the next few years, especially if the problematic Financial Fair Play system has genuinely been scuttled. The modern structures of the game ensure that it is set to be dominated by the rare super global clubs and the rare super wealthy owners.

That solitary Champions League between the two so far was won by Chelsea in 2012, and marked a joyous moment for the club as a whole, and Roman Abramovich personally. It had that feel of a holy grail. It showed how obsessed Abramovich was with this trophy, as well as his deep love for the game, even if his wider reasons for buying the club have always remained a subject of discussion. The last few months have seen the Chelsea owner secure a series of apologies from media institutions over inaccurate claims about such issues, as well as his politics. 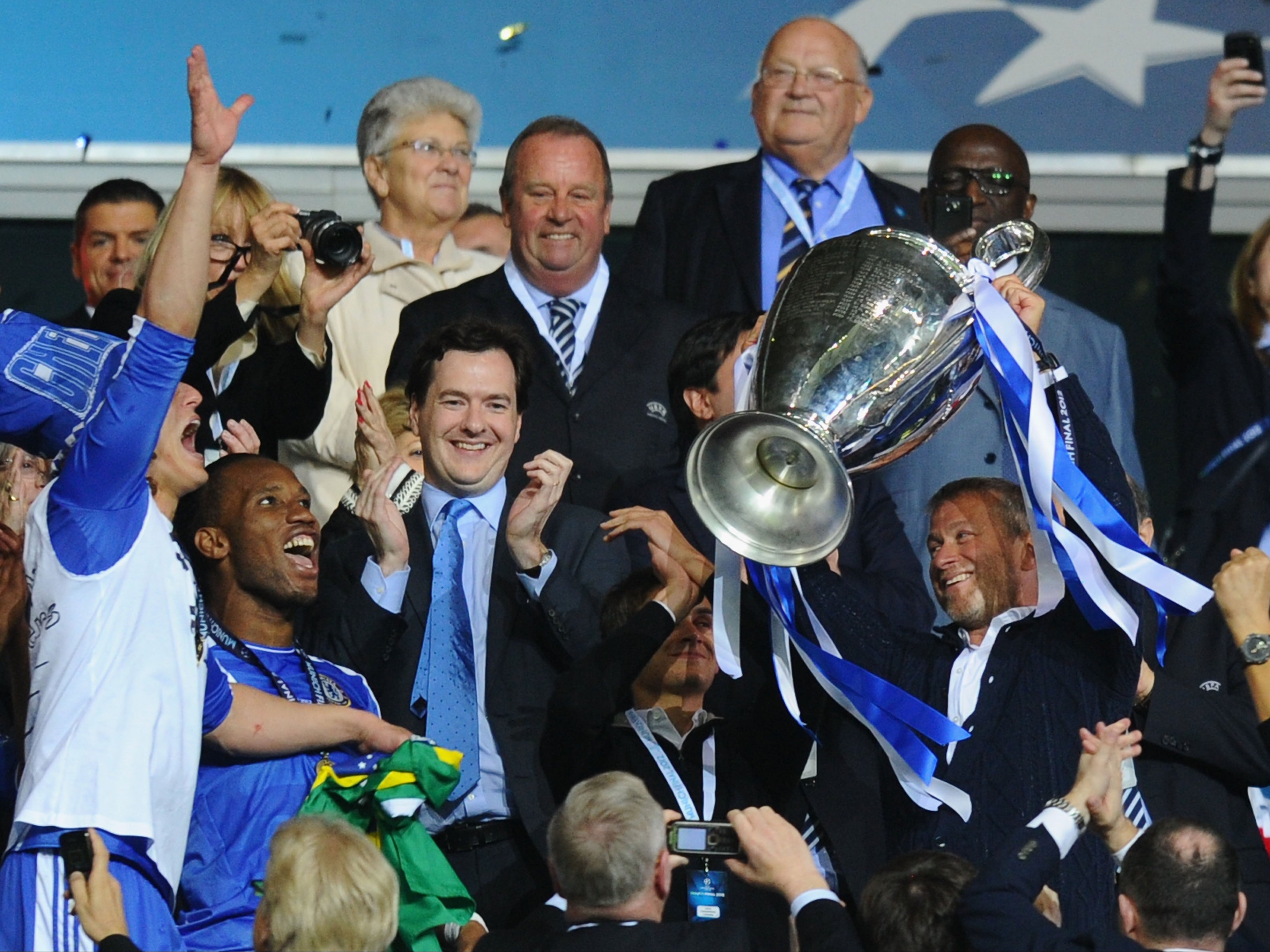 Roman Abramovich has always been obsessed with the Champions League

There is nothing by now to be said about City, especially in these pages. Abu Dhabi bought the club as a state political project. The nominal owner, Sheikh Mansour, has never shown anything close to the interest in football that Abramovich has. It is instead Khaldoon al Mubarak, one of crown prince Mohamed bin Zayed’s top figures – and the de facto prime minister of the emirate – who runs the club. All of this has happened as the human rights record in the United Arab Emirates has been criticised for getting much worse since the 2008 takeover of City, and the war in Yemen became a humanitarian crisis.

There are times when it is worth stopping and reflecting on the apparent absurdity that these issues are being discussed around club football’s most hallowed fixture, but that is what the modern game has become. That is directly connected to the immense global media interest in this very fixture. It is so huge that it attracts such interests. This is the social and political capital that football offers.

Winning the Champions League would instantly give City’s owners an unmatched sporting capital. It would establishment authority. It would be gravitas. It would foster positive connections for a problematic state.

There are many figures at City who have an innocent yearning for this trophy, of course, in the way it’s supposed to really be about. There are the local staff who have worked there for years, through the bad years, when this competition always got associated with their now quieter neighbours. Those figures are now experiencing the same sense of quest and holy grail that Chelsea did a decade ago.

Guardiola won the last of his second Champions Leagues the year before Abramovich’s great victory, in that landmark 2011 victory with Barcelona, widely seen as one of the greatest victories in the history of the competition. It has almost come full circle for him, though. It is both Guardiola’s career performance, and also the standard he hasn’t yet matched. It has created a sense of holy grail about the competition for him again, as he seeks that record-matching third European Cup. Had you told anyone in 2011 that he wouldn’t yet have another by now – and would have been bested by Zinedine Zidane – it would have been hard to believe. It is remarkable enough that he hasn’t even reached another final in that time, especially since some previous City sides were better than this.

It is why Guardiola has been so mindful of that unique excitement, and has sought to take it all in. There is a rare assurance about the City coach at the moment, too. Or, at least, less of his manic intensity. He knows that if all plays out normally – with no distortions, no drastically bad luck – he will be a European champion again, while City will become the 23rd different club to win the Champions League, as well as the sixth from England.

It’s just that he also knows Tuchel is good enough to cause those distortions. That is why it is probably more accurate to say there is less of Guardiola’s manic intensity rather than more assurance. The fact Tuchel has beaten him twice in their only meetings in England will be playing on the Catalan’s mind.

Tuchel has himself acknowledged that Chelsea aren’t yet close to City’s level over the course of a whole season, but naturally insisted they can be better on any given day. They’ve already proven that, even if neither game had anywhere near the stakes – or the starting teams – of this. 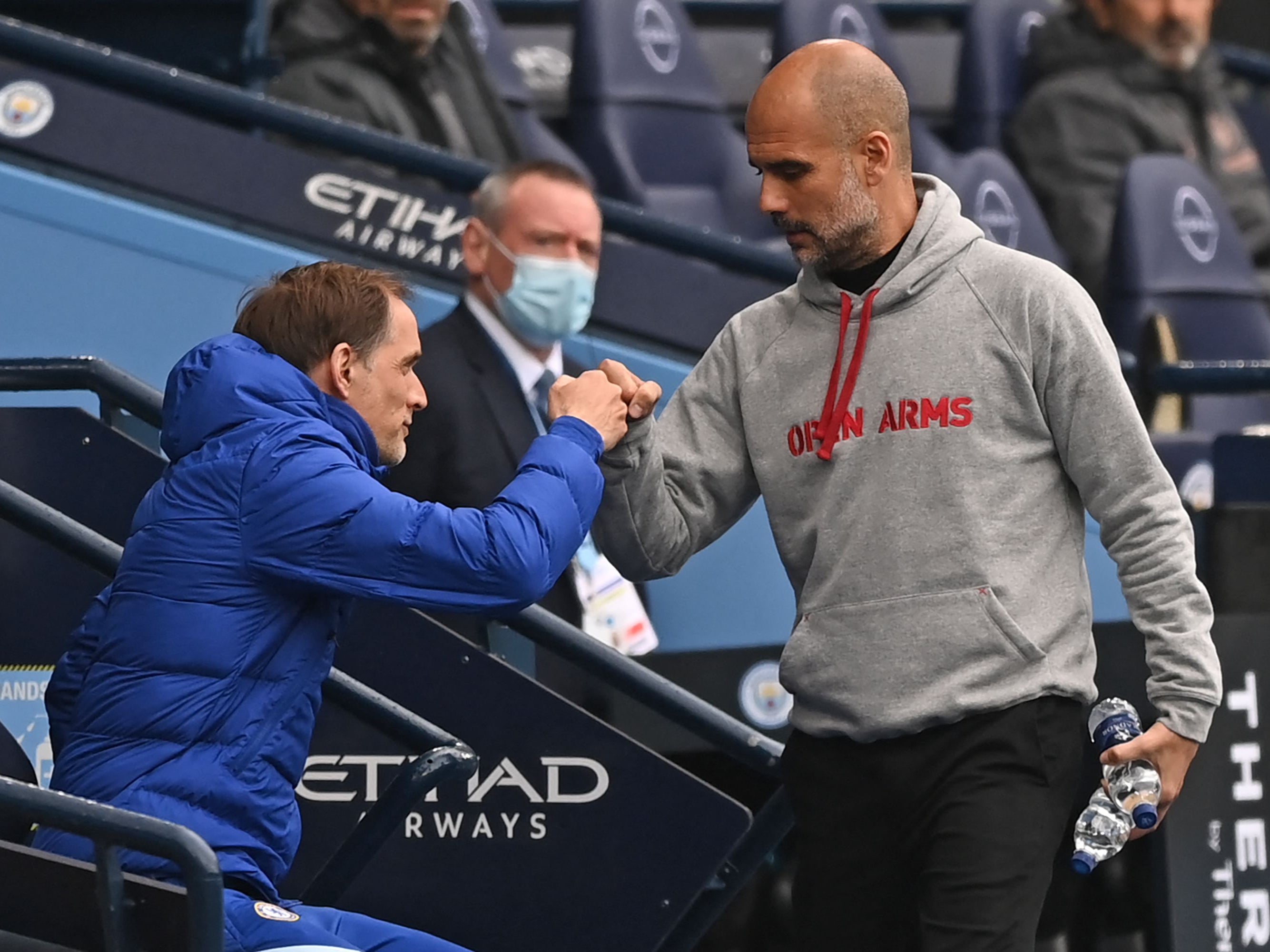 Two of the game’s great thinkers meet in Porto

That game theory dynamic of the previous fixtures, where it’s harder to know whether it was better for Chelsea to win those two games or whether City are now “due” a victory, only enriches what might be the most tactical Champions League final ever seen. It has certainly never seen two managers as utterly obsessed with the intricacies of the game, the subtleties, the dynamics.

This is another vision of the future, in what they represent as coaches. They are genuinely setting new parameters in how you have to look at the game. Such complexities still come down to simple dualities. City will be the more proactive. Chelsea will have to stave off their possession, while City have to try and blunt Chelsea’s piercing pace.

Within that, both sides have a series of players that can win any game in an instant. You can take your pick of any number of stars. This is the stage that Kevin De Bruyne feels he was born to take command of, that N’Golo Kante can rampage all over to have his greatness truly recognised.

Prominent among those stars, of course, are also Phil Foden and Mason Mount. There is a grand irony that two of the most important players at these geopolitically scaled clubs are homegrown local lads who have dreamed of playing for them on such occasions. That is what it’s all about, just as there is a grand irony that these are the two clubs competing in the Champions League final.

There is now only a grand occasion left, even with its many complications, and that great sense of excitement.