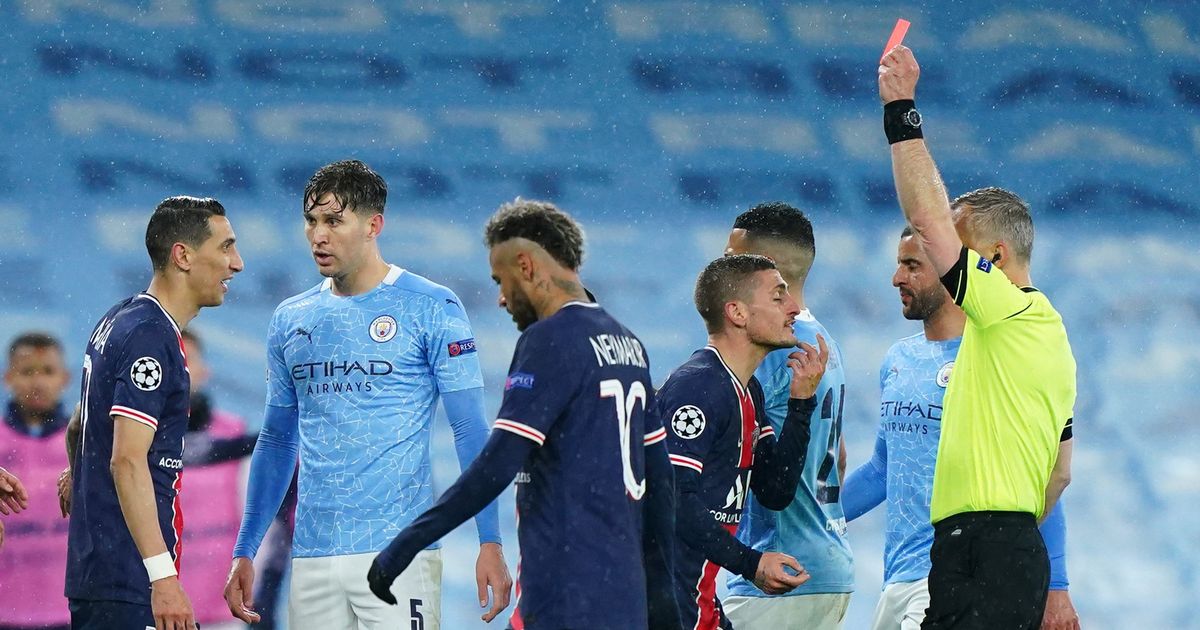 Commentator Jim Beglin has come under-fire for blaming Angel Di Maria’s sending off against Manchester City on his ‘Latino temperament.’

The Paris Saint-Germain midfielder received his marching orders midway through the second-half for a horrible off-the-field stamp on Fernandinho.

Fernandinho walked towards Di Maria as the former Manchester United man left the pitch to retrieve the ball for a throw in the 69th minute.

Di Maria saw the Brazilian edging towards him and aimed a fierce jab of the leg which connected directly with Fernandinho’s shin.

CBS commentator Beglin blamed Di Maria’s moment of madness on his ‘Latino temperament’ – much to the anger of viewers on Twitter.

One user wrote: “Woah this British broadcaster just said Di Maria stomped on Fernandinho because of his “Latino temperament.” crazy statement my guy. might wanna walk that one back.”

“This guy really just say “it’s that Latino temperament”…WTF What year is this,” was the view of another.

Someone else added: “‘Latino Temperament’ This is disgraceful. Dangerous stereotypes and racial bias in football commentary needs addressed.”

A fourth person said: “Yes let’s all laugh at the meltdown that is PSG but Jim Beglin, an actual commentator, just said that Di Maria’s sending off was his “Latino Temperament.” Racism comes in many forms. This is one of them.”

Beglin, who commentates on British TV for BT Sport, issued an apology soon after the incident.

He said: “When Di Maria was sent off, I described it by using the word Latino. For anybody that’s taken offence, I do apologise – sincerely apologise.”

Di Maria’s sending off was the final nail in the coffin on another miserable night in Europe for PSG.

Trailing 2-1 from the first-leg, Mauricio Pochettino’s men never looked like overturning the deficit.

Just like in Paris a week ago, it was former Leicester City man Riyad Mahrez who did the damage.

Mahrez scored twice either side of half-time as City won 4-1 on aggregate to reach their first ever Champions League final.