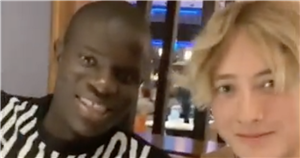 Chelsea ace N'Golo Kante proved he is still one of the Premier League's most down-to-earth stars by popping out for a bite to eat at Pizza Express this week.

Kante, 30, posed for selfies with a waiter while waiting for his dinner at the Italian high street chain, before appearing to sign a napkin and shake hands with the staff.

The France midfielder, dressed in jeans and a black jumper, was all smiles as usual when the waiter captured the moment with a photo.

His friendly antics when out for a meal confirms he is still one of the nicest guys in football despite raking in an estimated £290,000 per week.

In the past Kante has been seen doing his weekly shopping at Asda, driving a Mini Cooper and being too shy to lift the World Cup trophy.

He also provided a viral moment online when he popped into a fan's house to eat curry, play FIFA and watch Match of the Day after missing a Eurostar to Paris from Kings Cross back in 2018.

Do you think N'Golo Kante is the best midfielder in the world? Let us know in the comments section below.

Arsenal fan Badlur Rahman Jalil revealed he first spotted Kante at a mosque before inviting him back to his pad.

"It's Islamic teaching to invite guests to your house for dinner, so I asked him," Badlur said.

"He came with me and my brother because he was on his own and said he was only going to go home anyway.

"He was on a protein diet so we had a chicken curry. He even had a cup of tea.

"He beat us all at Fifa and then we watched Match of the Day. It was a really nice evening."

However, despite his modest behaviour off the pitch Kante insists his nice-guy image is "overblown".

Speaking before France's Euro 2020 opener over the summer, the former Leicester star said: "I am just a normal guy.

"There is no need to say I am the kindest or the nicest. I am just a player like the others.

"I think that sometimes it is overblown. It does not need to be. There are other people like that in football."