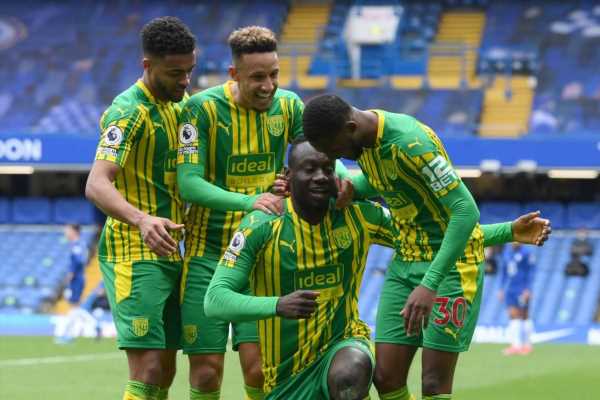 The Blues struck first when Christian Pulisic tapped home after Marcos Alonso’s free kick hit the post, but the Baggies bounced back as Matheus Pereira netted twice in first half stoppage time.

Substitute Callum Robinson slammed a volley into the roof of the net before Mbaye Diagne scored to secure the points for West Brom, although Mason Mount pulled one back for the Blues – before Robinson clipped in a brilliant late fifth.

Thiago Silva was sent off for two bookable offences – with the second yellow card being particularly contentious as he followed through on Okay Yokuslu in the first half.

The result means Chelsea are in danger of slipping out of the top four this weekend while West Brom move seven points from Newcastle and safety.

Edouard Mendy – 6. The French goalkeeper could do little about the two Pereira goals as he was caught out by a fine finish for the first while being unsighted for the second. Saved well to deny Pereira a hat-trick.

Cesar Azpilicueta – 6. Not a vintage performance from the Spaniard, whose lack of pace was exposed as West Brom took control.

Thiago Silva – 5. Perhaps unlucky to receive a second yellow, but it was a sloppy foul on Yokuslu that the Brazilian should not have made when already booked.

Kurt Zouma – 5. He struggled at the back today, and perhaps should have scored Chelsea’s third with the goal gaping.

Reece James – 6. James offered himself as an option whenever Chelsea went forward, but he was exposed defensively at times in the second half.

Jorginho – 2. Slow in midfield, the Italian struggled to dictate the tempo of the game as he usually does. He was incredibly wasteful in possession and at fault for the second goal. Awful.

Mateo Kovacic – 5. The Croatian failed to leave his mark on the game, and his influence was minimal. He improved in the second half.

Marcos Alonso – 6. Unlucky to hit the post with his free kick, but Pulisic was there to score.

Hakim Ziyech – 5. Overhit several passes, including a crucial through ball to Pulisic, who would have been in. Withdrawn after Silva’s red in the first half.

Christian Pulisic – 8. The American was Chelsea’s most dangerous player and got his reward with a fine display of instinct to follow up Alonso’s free kick to give the Blues the lead. Unlucky to be substituted at half time.

Timo Werner – 6. His intricate link-up play was impressive, but once again his true impact on the game was left wanting. The German did well to set up Mount. 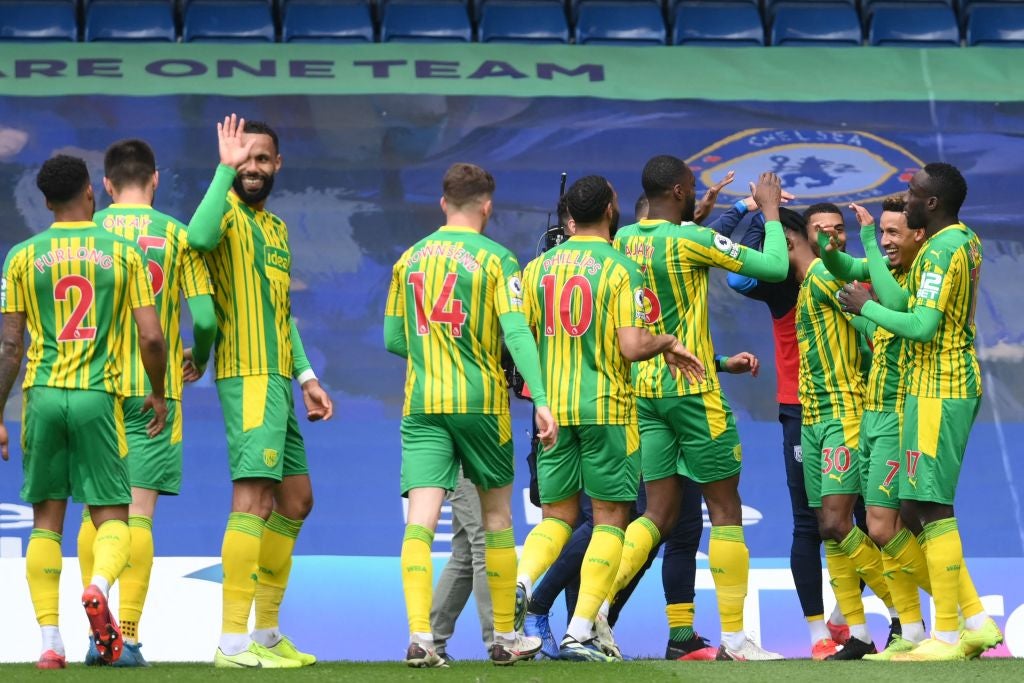 Sam Johnstone – 7. He could do little to deny Pulisic but made a fine stop before the getting the assist for the equaliser. Johnstone did well to deny Werner when the German was through on goal.

Dara O’Shea – 6. His afternoon was cut short by an unfortunate injury.

Kyle Bartley – 7. Solid throughout and made a key block on James’ cross. Lucky to not concede a free kick for a shove on Werner.

Conor Townsend – 6. Calm on the ball, it was a resolute performance from the Englishman. His fine work led to the fourth goal.

Matheus Pereira – 8. The Brazilian made an excellent run to equalise for the Baggies on the stroke of half time. He took his second impressively as well.

Matt Phillips – 7. An excellent piece of dribbling led to Phillips’ incredible effort that rebounded off the crossbar.

Okay Yokuslu – 7. The Turkish loanee from Celta Vigo was impressive and never stopped running in midfield for Sam Allardyce.

Ainsley Maitland-Niles – 6. The on-loan Arsenal player put in a shift and worked tirelessly for the Baggies.

Mbaye Diagne – 7. The striker was largely anonymous throughout, but he took his chance excellently to give West Brom a 4-1 lead.

Branislav Ivanovic – 6. Withdrawn after picking up a muscle injury.

Callum Robinson – 8. The forward took his goals brilliantly after coming off the bench.