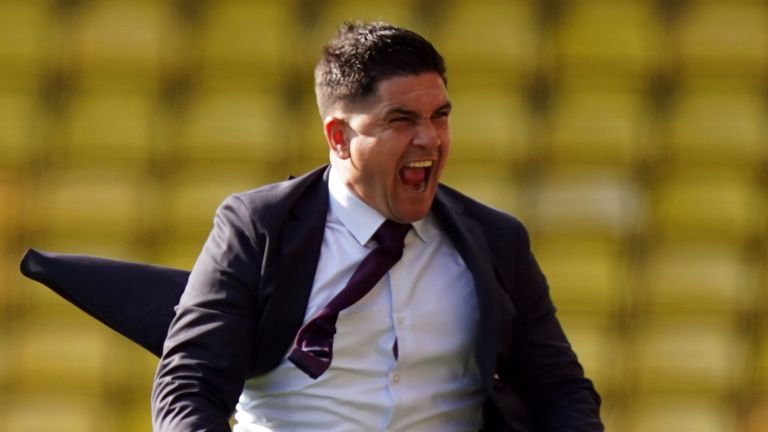 Watford secured promotion back to the Premier League as Ismaila Sarr’s penalty earned them a 1-0 victory over Millwall and delayed Norwich’s title celebrations.

Sarr slotted home after being fouled by Billy Mitchell in the 11th minute and the Hornets held on in the face of some intense Millwall pressure, with goalkeeper Daniel Bachmann outstanding.

The Canaries, already promoted, beat QPR 3-1 to remain five points ahead of Watford with two games to play.

Left-back Xavi Quintilla gave Norwich an early lead and, three minutes after Lyndon Dykes had a penalty saved by Tim Krul, right-back Max Aarons made it 2-0.

Dykes cut the deficit in the 71st minute but Emiliano Buendia restored the two-goal cushion with nine minutes left.

Brentford sealed a play-off place and leapfrogged opponents Bournemouth in the table as substitute Bryan Mbeumo scored the only goal.

The Bees had captain Pontus Jansson sent off early in the second half, while Ivan Toney was unusually wasteful, but Mbeumo stepped off the bench and needed only two minutes to break the deadlock.

The striker scored from a corner when he appeared to impede the goalkeeper as he jumped to connect with the ball.

Swansea can secure play-off places for themselves, Bournemouth and Barnsley by avoiding defeat against Reading on Sunday.

At the other end of the table, Wycombe‘s relegation was all-but confirmed after a 2-1 loss at Cardiff.

That they are still mathematically in it is down to Derby‘s 2-1 defeat at home to Birmingham. Colin Kazim-Richards gave the Rams the lead but Lukas Jutkiewicz’s double secured Birmingham’s survival and left Wayne Rooney’s side just four points ahead of Rotherham, who have two games in hand.

Sheffield Wednesday are also four points adrift, without the solace of games in hand, after losing 3-1 at Middlesbrough. Yannick Bolasie’s opener was cancelled out by Josh Windass’ penalty but Josh Coburn and Duncan Watmore secured victory for Boro.

Adam Armstrong scored a hat-trick as Blackburn demolished Huddersfield 5-2. Blackburn’s leading marksman moved to 24 league goals for the season and Ben Brereton and Sam Gallagher also scored, with Ryan Nyambe’s own goal and Josh Koroma’s strike mere consolation for the Terriers who are still within range of Rotherham.