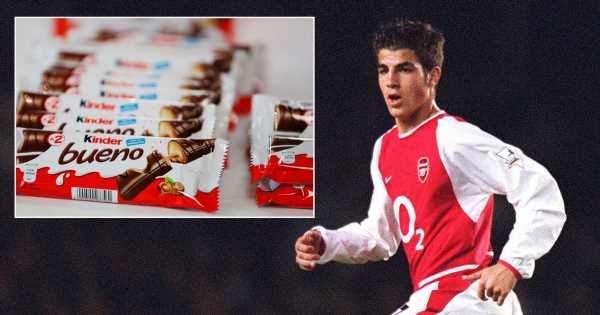 Cesc Fabregas has revealed he celebrated his Arsenal debut by tucking into a Kinder Bueno and a can of Coke.

In 2003, in a run-of-the-mill League Cup clash with Rotherham, Arsene Wenger introduced the world to a young Fabregas. At just 16 years and 177 days old, when the youngster took to the pitch at Highbury, he became the youngster player Arsenal had ever seen.

Speaking ahead of his new ITV documentary, Fabregas said: “I had £4,000 a month to spend. It was impossible for me to spend that amount. Give me £500 a month – that’s enough! Being in that small room in Noreen’s place was a privilege.”

And he put that £500 to good use after his debut: "I went home and Noreen was sleeping and I had a Kinder Bueno and a Coke."

Fabregas didn't truly break into the side until Patrick Vieira was sold: “The day Patrick left was a very sad one but a very important one for my career. Arsene called me into a room before training and said to me, what do you think if I tell you I’m selling Patrick?

What do you think about Cesc Fabregas' first post-match meal? Let us know in the comments section below

At 37-years-old, Fabregas is still playing, and he has recently turned up in the picturesque Italian scene of Lake Como – where he will play for Serie B club Como.