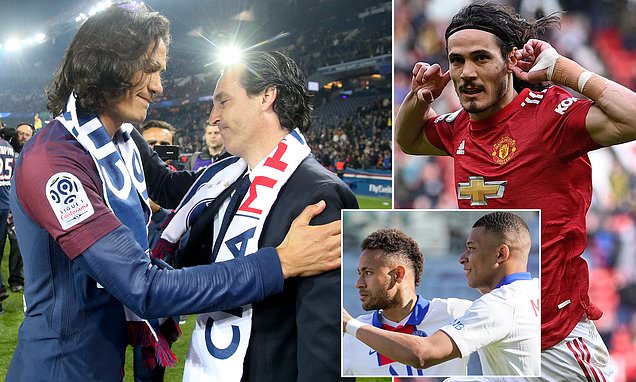 Manchester United’s Edinson Cavani went on the charm offensive when asked this week about his former manager Unai Emery.

‘He’s a hard-working coach. I really liked his way of working,’ said the celebrated striker ahead of Wednesday night’s Europa League final between United and Emery’s Villarreal.

Followers of Paris Saint-Germain won’t be fooled. The pair had an uneasy relationship in Paris during a period when Cavani lost his status as top dog due to the incomings of Neymar and Kylian Mbappe. 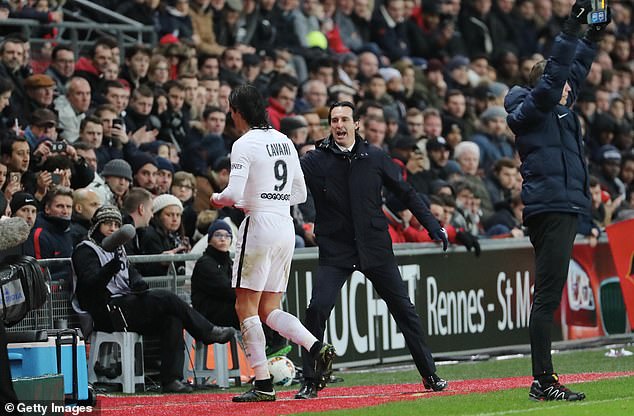 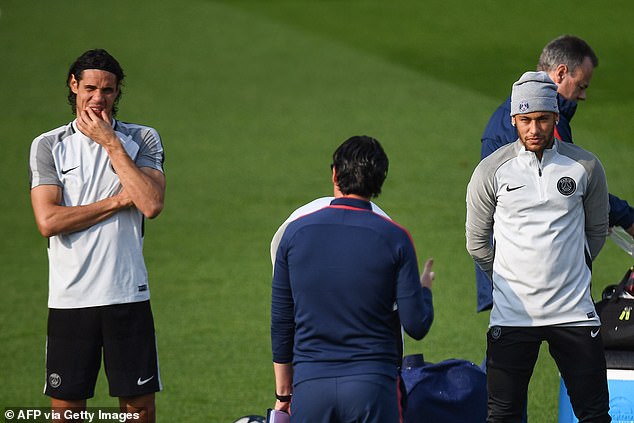 One of Emery’s perceived weaknesses is dealing with big stars, he’s been more successful at Sevilla and Villarreal than PSG or Arsenal, and the flashpoint in Paris came during a saga which saw Cavani lose penalty duties against his will to Neymar.

Throughout the episode – which became a hot topic during 2017 and 2018 – Emery was ineffectual in establishing harmony. ‘The penalty-taking hierarchy is clear but I prefer not to talk about it,’ he said.

On another occasion, he claimed it should be a ‘gentleman’s agreement’ between the two players on the pitch to sort out, but privately Cavani felt the manager was in Neymar’s corner.

It became an issue in September 2017 when PSG were awarded a penalty during a 2-0 win against Lyon. Cavani had already converted three penalties that season and was closing in on Zlatan Ibrahimovic’s record as the club’s all-time top scorer. 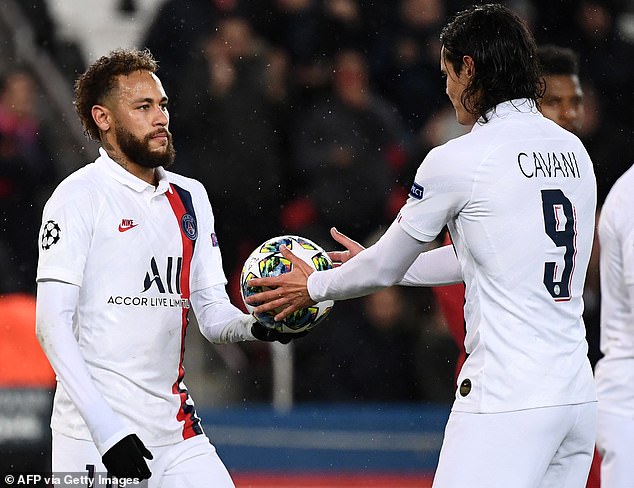 Scars still remain from the penalty fiasco, in which Neymar (left) took the duties from Cavani 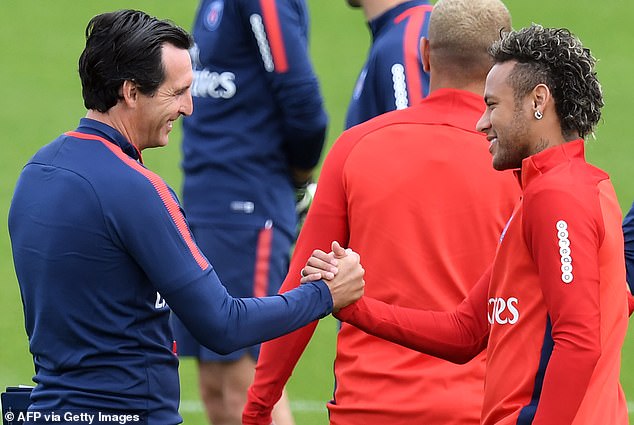 He took the ball, placed it on the spot and was about to go through his routine when Neymar went over and tried to claim responsibility. Cavani ended up distracted and missed the penalty. He held Emery responsible for not backing him afterwards.

‘He (Emery) was to blame for that moment – it’s something that should be made clear,’ explained Cavani.

‘I told Neymar “I’m the one who takes penalties” and there was an exchange of words. Then, in the dressing room, I told him what I thought.

‘After that, Emery said that Ney was going to take penalties and I asked him why. I said we’d agreed the year before (Cavani would be the penalty taker). He said I was going against him.’ 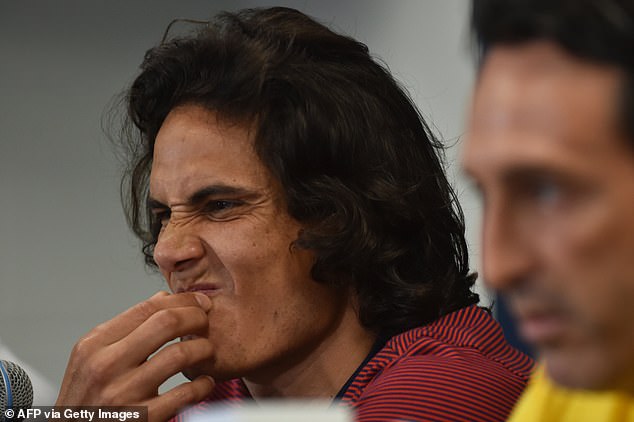 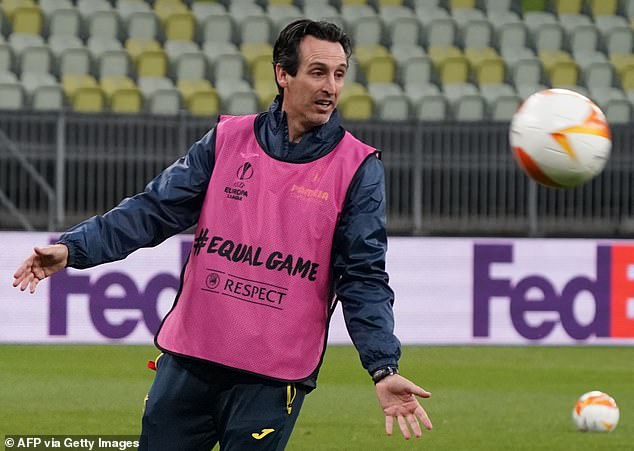 Emery is heading into his fifth Europa League final, this time in his first season with Villarreal

The reality was PSG’s Qatari owners had invested heavily in Neymar and Kylian Mbappe and Emery was unable to handle Cavani’s hurt at being demoted in the pecking order.

His form remained good and in 2017-18 he was the club’s top scorer with 27 when they faced Real Madrid in the Champions League quarter-final. Madrid won the first leg 2-1 in Paris but PSG were holding the Spaniards 1-1 in the Bernabeu with half-an-hour left when Emery surprisingly replaced Cavani with a defender, Thomas Meunier.

The thinking was to make PSG more solid to allow Neymar and Mbappe the chance to shine. There was no room for Cavani in the equation. 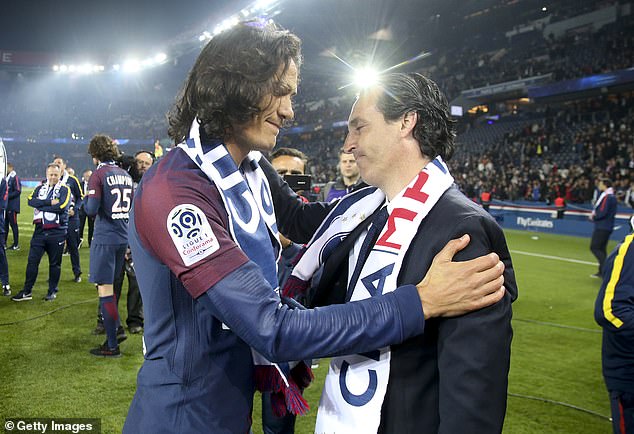 Speaking to the media this week, Cavani was full of praise for Emery despite their falling-out 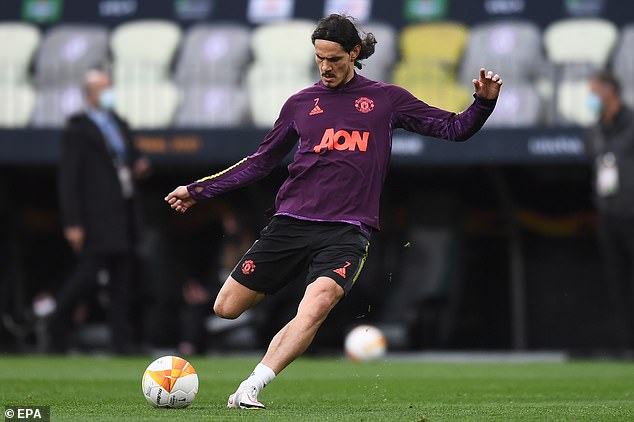 Cavani trains in Gdansk ahead of the game, in which he is set to play a major part for United

As it happens, the plan backfired badly. Real won the game 3-1 to progress 5-2 on aggregate. Two months later Emery announced he would be leaving, unable to deal with the large egos.

Both men have since found success outside Paris. After a torrid time at Arsenal, Emery has re-established his reputation by taking Villarreal to a European final.

At 34, Cavani has been a revelation at Old Trafford. He has scored 16 goals in 38 games this season and acted as an important mentor to Mason Greenwood and Marcus Rashford.

His rift with Emery happened some time ago but it left scars. You know Cavani would love to brandish a winners’ medal at the Spaniard’s expense in Gdansk. 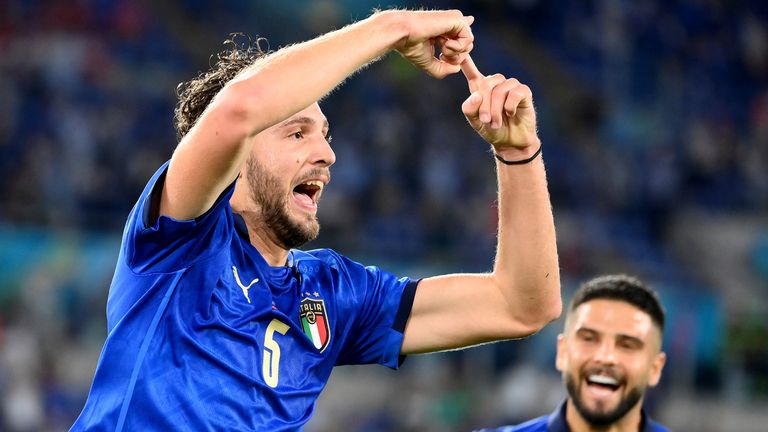