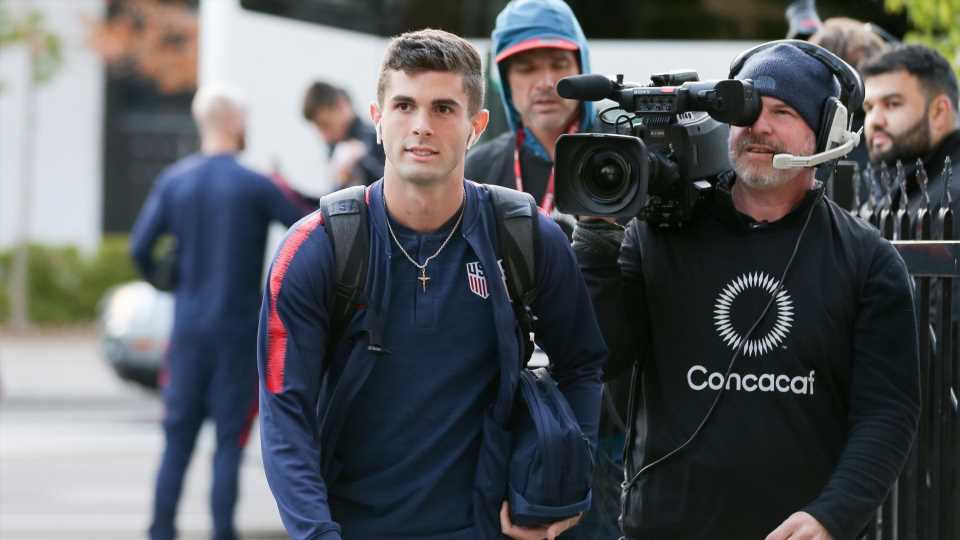 When American soccer’s Christian Pulisic sprints across the field at Estadio do Dragao in Portugal on Saturday afternoon, there will be something on the order of 800 million eyes on him. There is no larger annual worldwide audience for a sporting event than for the UEFA Champions League final, and there is no greater reason for Chelsea’s presence in this game than the goals Pulisic generated in the team’s semifinal series.

In the sporting sense, Pulisic has become a big deal. At age 22, only a half-dozen years removed from leaving his Pennsylvania home to begin a pro soccer career in Germany, he is a prominent player at one of the most prestigious clubs in the world’s most popular sport.

He is not yet a star, though, and by this we do not mean he is not a star player. We mean in the sense of accumulating social media followers, signing huge endorsement deals, laying siege to our screens – our televisions, our laptops, our tablets and phones – whether or not we are prepared for the barrage.

The curious chemistry that engenders such a figure is elusive, and it’s possible it is less connected to performance in this era than ever before. Yes, we have Aaron Rodgers and LeBron James, but we also have Tim Tebow.

“I think we make a mistake in thinking that celebrity is a meritocracy,” Pablo Torre, host of the ESPN Daily podcast and frequent panelist on Around the Horn and Pardon the Interruption, told Sporting News. “Because I think all the time now about the biggest crossover, the biggest new names in American sports, are Jake and Logan Paul. And it’s depressing.

New York Post sports columnist Mike Vaccaro grew up in a sports world dominated by the Mets, Jets, Nets and other teams whose names didn’t rhyme. For a short period in his childhood, because of the presence of Pele, Giorgio Chinaglia and Franz Beckenbauer, the New York Cosmos drew massive crowds to their home games, but that didn’t last, and neither did the team and neither did the league. The sport here went mostly dormant for more than a decade.

It was reanimated by the USMNT’s qualification for the 1990 World Cup, and by the awarding of the 1994 World Cup to the United States, which led to the formation of Major League Soccer. The dominance of the U.S. women’s national team for three decades has been a sustaining force to the sport’s growth.

In the men’s game, though, the best teams and players are not here. And that includes Pulisic, save for his home-game appearances for the USMNT.

“You can follow whatever you want to follow now. You kind of determine what you want to care about. I think there’s more of a shot for a guy like that now,” Vaccaro told SN. “The teenagers in my neighborhood who I know spend a lot of time caring about sports, they care about the Yankees, the Giants and the Knicks, but they also have their Premier League teams. Almost all of them do. Invariably, they have their favorite players.

“This guy being an American is a draw for a lot of guys I know, including my next-door neighbor. He might not be able to get the kind of vast rewards someone in his position ought to get because of how good he is, but I think we’re getting to a place where a guy like that will be nationally appreciated, more than he is now.”

To the extent Pulisic is known at this point from NYC to LA, from Miami to Maine, from Seattle to South Carolina, it is entirely for the magical things he does with his feet. He has scored more Champions League goals than any American player, ever. He ranks No. 12 on the U.S. men’s national team scoring chart with 15 international goals, though he is tied for 79th in appearances.

When he enters the game against Manchester City in the Champions League final, which is all but assured whether or not he is in the starting lineup, he will become the first American to play in the Super Bowl of European soccer.

Within the space of a month, Pulisic will have appeared in England’s biggest annual game, the FA Cup final, and Europe’s. He’ll have conquered the Yankees/Cowboys/Lakers of world club soccer with his goal and assist in the Champions League semifinal series.

All of this, though, is happening roughly 4,500 miles away from the center of the United States. This would seem to be an obstacle to Pulisic’s elevation to media stardom. Except he could cross over from across the Atlantic, according to Gail Sideman of G Publicity, who has done public relations and branding work for numerous athletes, teams broadcasters and authors.

“Oh, no question. I think because soccer is growing so much over here. I think more in the last probably 5-10 years than ever,” Sideman told SN. “As crazy as it is, it’s because of the women’s game.

“I think he’d be great from a branding standpoint, and lord knows American soccer needs that. I don’t care that he’s playing in Europe. They need that face. If he did in a couple of interviews kind show a little sense of humor here and there … but I totally get his apprehension to do it.

“I saw a GQ article that didn’t hurt. He’s going to be that person that the girls kind of go gaga, and he can use that to his advantage. And not just because, ‘Hey, I was in GQ,’ but if brands want to get involved with him, he can certainly use his looks as a tool. That, plus his play. I think it’s going to take some time, just because of his personality. If he was out there and gregarious, I think you’d hear a whole lot more about him now.”

Pulisic missed the opportunity to spread the gospel of his brand when the United States failed to qualify for the 2018 World Cup. It surely was not his fault; still a teenager, he produced seven goals and seven assists during the qualifiers, including the only goal in the team’s disastrous loss at Trinidad & Tobago. It was his problem, though.

Pulisic would have been showcased across the nation on Fox Sports World Cup broadcasts as the new face of American men’s soccer. Instead, the tournament proceeded without him and his teammates. But there’s another chance coming soon, with the 2022 World Cup scheduled to open next November in Qatar. The U.S. will face another challenging campaign to qualify, this one condensed as a result of the COVID-19 pandemic.

“For Pulisic, the World Cup is the big lever in all of this,” Torre said. “Like, how do we invite soccer players into our homes? For Chris Paul, we do it through the NCAA Tournament when he was in college, and then we do it through the NBA and the postseason. It’s a matter of tapping that audience that previously was unaware of someone like Pulisic.

“But I think that in terms of a guy who certainly is really, really good, a guy who wins a lot and has enviable leadership characteristics and … I think we’re waiting for a story. Unfortunately, a story is not the same thing as success.”

The essential element to having a story that connects with the American public is, indeed, telling it. This could be the central ingredient of crossover stardom, and the most absent for Pulisic, at least at this stage of his career: Does he want it?

There are athletes who earn significantly more from endorsements than from prize money or team salaries. We’re talking about Tiger Woods, the year after he won his fourth title at the Masters, earning $2.3 million on the course and nearly 30 times that from sponsorships. So that’s a motivation to push for broader recognition. But it also alters one’s existence, and the differences can range from nuisance to nightmare.

“There are two ways you can do this. One is to lean all the way in, and that is the influencer model,” Torre said. “You want it, you know how to play the game, you’re good at it. This is your life.

“Mike Trout is someone who has deliberately rejected that, and part of me says, ‘That guy actually has this all figured out.’ It’s the idea that, ‘I do like walking around the street and no one knowing who I am. The very thing Major League Baseball wishes I would want, I actually don’t. Because I have a pretty good sense of what that life might be like, and it sounds awful.’ ”

Although David Beckham won the Champions League and league titles in England, Spain, France and MLS, his fame occasionally had a negative impact on his game, even leading to a moment after an FA Cup loss in which Sir Alex Ferguson kicked a boot that was sitting on the floor that accidentally struck Beckham above his eye. After that locker room incident did not stay in the locker room, Ferguson insisted to the team’s board of directors that Beckham be sold.

So it could be that Pulisic fears that sort of disruption, or that he simply is waiting to establish himself as a soccer star before concerning himself with becoming more than that. The effort to become a significant player could be hindered by outside distractions in a soccer world that still is beginning to accept that Americans are serious about the sport.

When Pulisic came to the U.S. with Borussia Dortmund in 2018 for a summer preseason tour that included a game at Soldier Field, he only briefly dealt with reporters despite being the star American attraction and being offered plenty of opportunity. He has been cooperative recently with major American broadcasters, sitting with Tim Howard of NBC and the CBS Sports studio team of Clint Dempsey, Oguchi Onyewu and Charlie Davies for extended conversations.

“He’s not the most outgoing guy in the world,” Jason Davis, host of the United States of Soccer program on SiriusXM FC, told SN. “I don’t think he is built to be engaging and gregarious, which is fine. You don’t have to be that. I don’t think he looks like he doesn’t want to be there when he does interviews and the like, but he’s also not one to say anything interesting.

“He’s not confident enough in himself – and maybe that changes – but he’s not confident enough in the public sphere to kind of throw things out, make a joke. Zlatan Ibrahimovic is the extreme, for sure, but that’s the kind of player who gets big attention. I mean, Zlatan has done ads in America, and you ask the average sports fan who he is, maybe 20 percent know who he is. But he has enough resonance because of his personality.

“Pulisic just isn’t built that way. The bar is really high for him to achieve something that gets him massive recognition in this country. He has to win a Champions League, but also be the winning goalscorer to get a mention on SportsCenter. He would have to help the United States men’s national team go to like a semifinal, and then there’d be lots to talk about.”