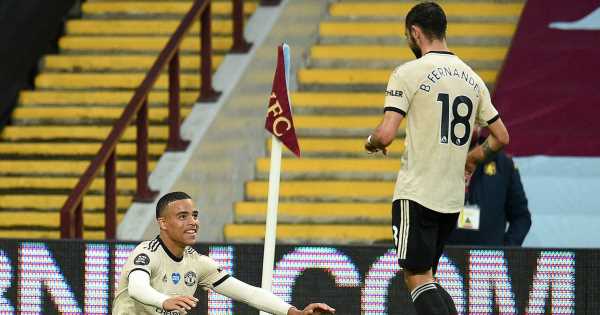 Fernandes admits he is not surprised United team-mate Greenwood has struggled to find the back of the net this season.

Greenwood has managed just six goals, compared to the 17 he plundered last term in his first full campaign for United.

The rising star made his England debut back in September but then lost his place in the squad after being caught smuggling women into the team hotel.

But Greenwood has started to find his best form again following goals in his last two games as he looks to produce a strong finish to the season.

Fernandes believes Greenwood's tough second season was always likely to happen, because opponents have had time to figure him out.

The Portugal international said: "Everyone has to know that Mason is a young player.

"Now everyone is starting to know how Mason is, it will become more and more difficult for him, It's normal. It's part of the development for him and he'll learn from it."

Fernandes said Greenwood's goal return is irrelevant, as long as he is contributing to the team's success in other ways.

He added: "It doesn’t matter how many goals he scores. The most important thing for us is that he still helps the team and he's doing his best.

"It's important for us as a team, it doesn’t matter who scores.

"If Mason scores for us or not, it's important if he can do other jobs – recover balls, pressing, defend when we need it, make assists, create danger.

"So it's not important for him to score. He has to understand, he's such a young lad. Of course, every striker wants to score but, anyway, he will score more and more goals as the seasons pass."