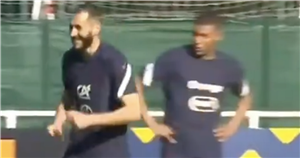 Karim Benzema is already showing why France decided to recall him for Euro 2020 this summer – with a brilliant finish in training leaving Kylian Mbappe stunned.

Benzema, 33, is back in the France squad after announcing his return to international football last month, having last featured for Les Bleus back in 2015.

The Real Madrid striker is now set to play a starring role as Didier Deschamps' men look to build on their 2018 World Cup success at this summer's delayed European Championship.

And when taking a look at his form in a shooting drill with his France team-mates this week, it's clear to see why he has returned to the fold.

After already slotting one home, Benzema receives another ball and takes a touch out of his feet before curling it into the top-right corner.

The exquisite finish clearly impressed Mbappe, who looked speechless while standing next to Benzema, and Antoine Griezmann could also be seen with his hands on his head in amazement.

Benzema, who scored 30 goals in 46 games for Madrid this season, was demoted from the France squad in 2015 following his alleged involvement in a sex-tape blackmail scandal with Mathieu Valbuena.

Valbuena was recently asked about his former team-mate's return to the squad and said: "If [Benzema] can bring more to the France team, so that's good for him. It will be on the field that it will be played.

"It is the coach's choice. For me, Didier will be a winner in all cases. If the France team works, we will say that he was able to adapt and if it fails we will not blame him.

"He knows how to make his lists. He's very smart about that. Did he call me to let me know about his decision with Benzema? No, I don't expect anything from Didier, nothing from anyone.

"Today, I make my life and I have fun in the field. I have no further comments to make."