When the team-sheets emerged on the eve of this game, Chris Hughton’s decision to place the 38-year-old right-back Bruno against the electric Adama Traore had the potential to be one of the crueller experiments the Premier League has witnessed.

Instead, the Catalan defender rose to the occasion quite remarkably. Not only did Bruno’s diligence, experience and patient defending nullify the threat of the former Barcelona winger, but his confidence grew to the extent that he raided forwards beyond Traore to set up Brighton’s opening goal.

The cult hero with the bald head and the Shoreditch beard powered into the penalty area on the blindside of Traore just after the interval to meet a hooked cross, where he drove a cross-cum-shot that fell to the poacher Glenn Murray to score his sixth goal of the campaign, and his 100th in total for Brighton. 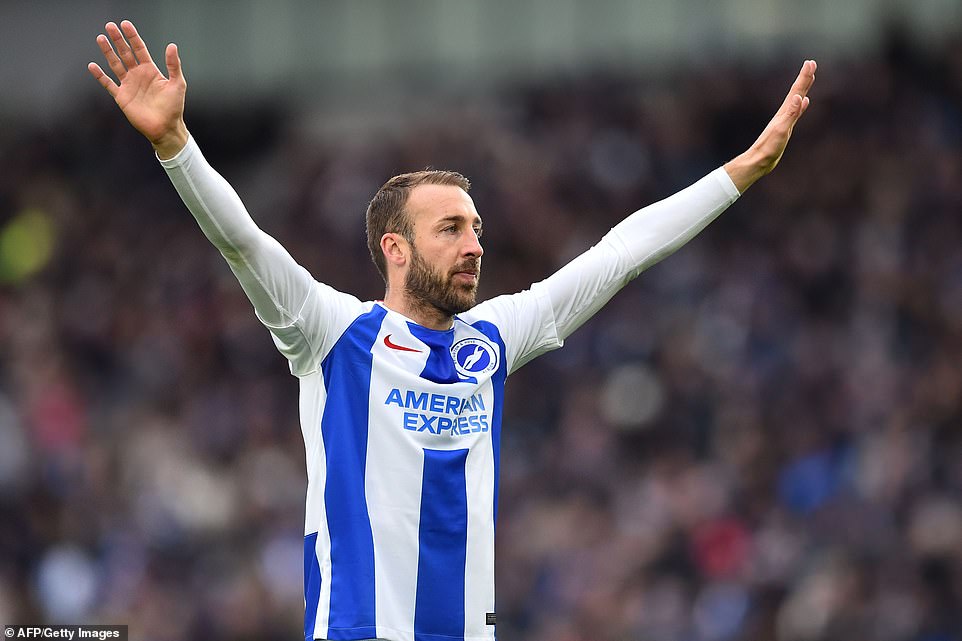 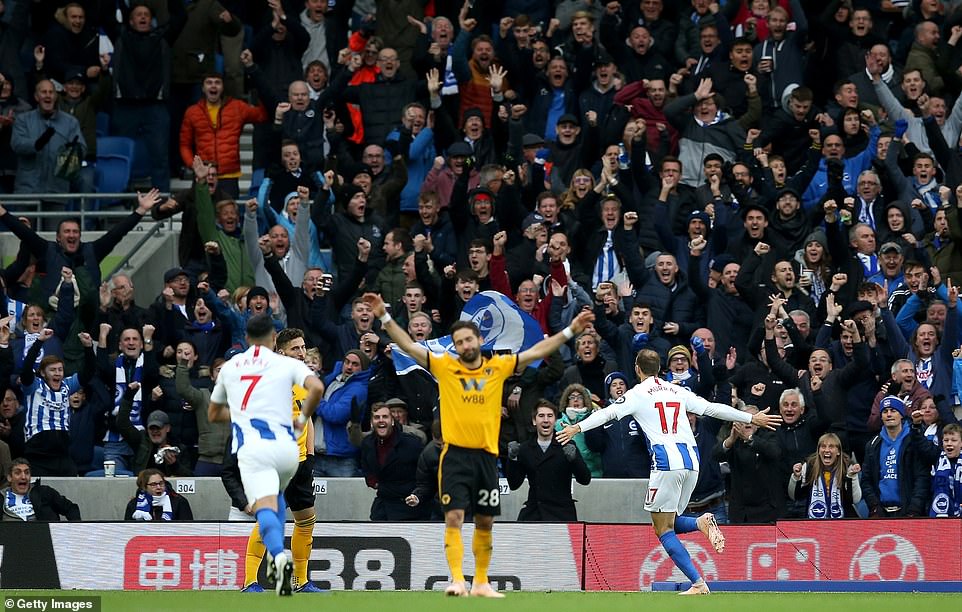 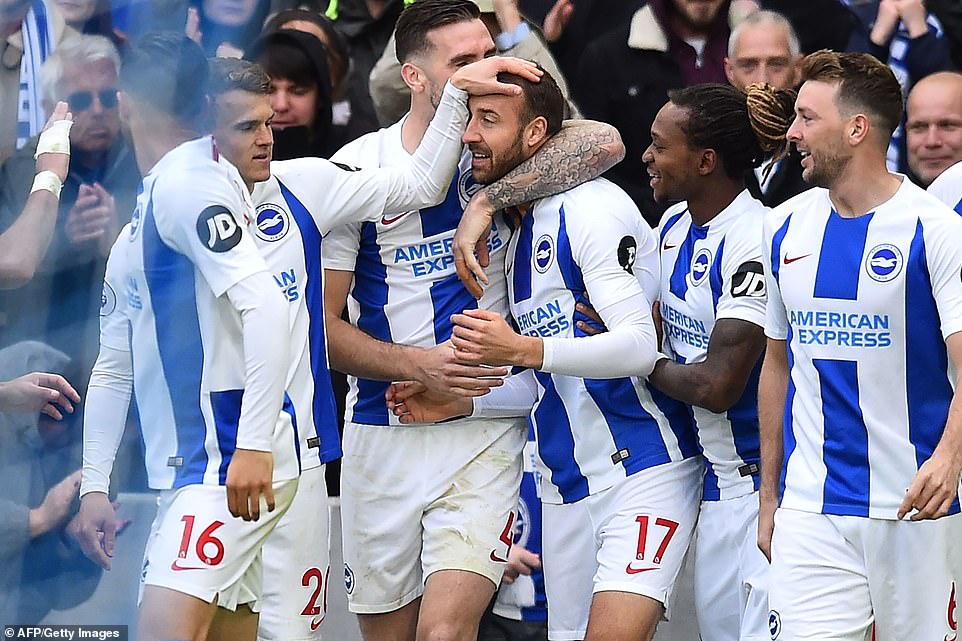 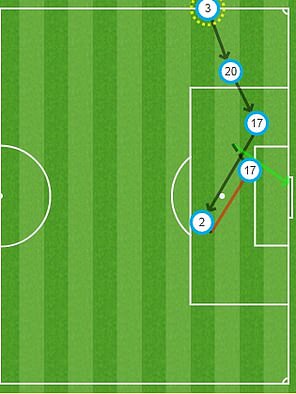 Glenn Murray put the Seagulls in front within three minutes of the second half as he finished off Bruno’s ball at the far post. Click HERE for more from our MATCH ZONE.

It makes Murray, 35, the highest-scoring Englishman in the Premier League this season and his natural instincts in front of goal were once again the decisive factor in turning Brighton’s diligence into a winning formula.

Soon after the goal, Traore conceded defeat in the battle against a man sixteen years his senior as he swapped wings and by the hour mark, he had been hooked and replaced by Ivan Cavaleiro.

Traore’s start was his first in the Premier League this season and this therefore marked the first occasion where manager Nuno Espirito Santo had made a change to his starting line-up. After defeat against Wolves last week, Wolves came out determined to make amends.

Ultimately, they were handed a brutal lesson in efficiency by one of the division’s most awkward opponents. Wolves had more of the play, played with the greater imagination and Brighton won the game with their only shot on target. Sometimes, football can feel rather unfair and once the disappointment settles, Santo will surely take many positives a fine performance. 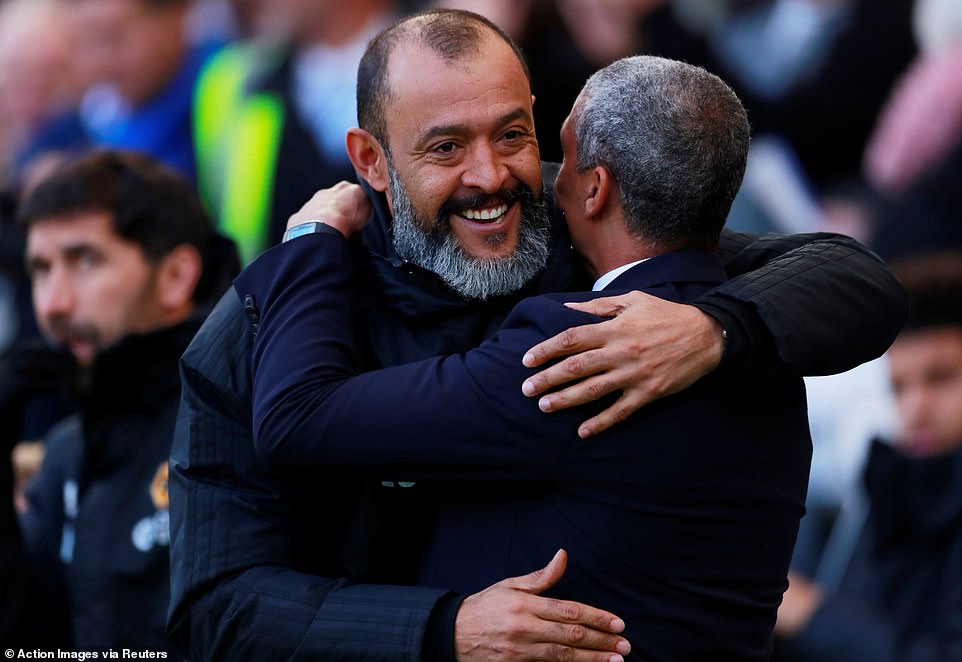 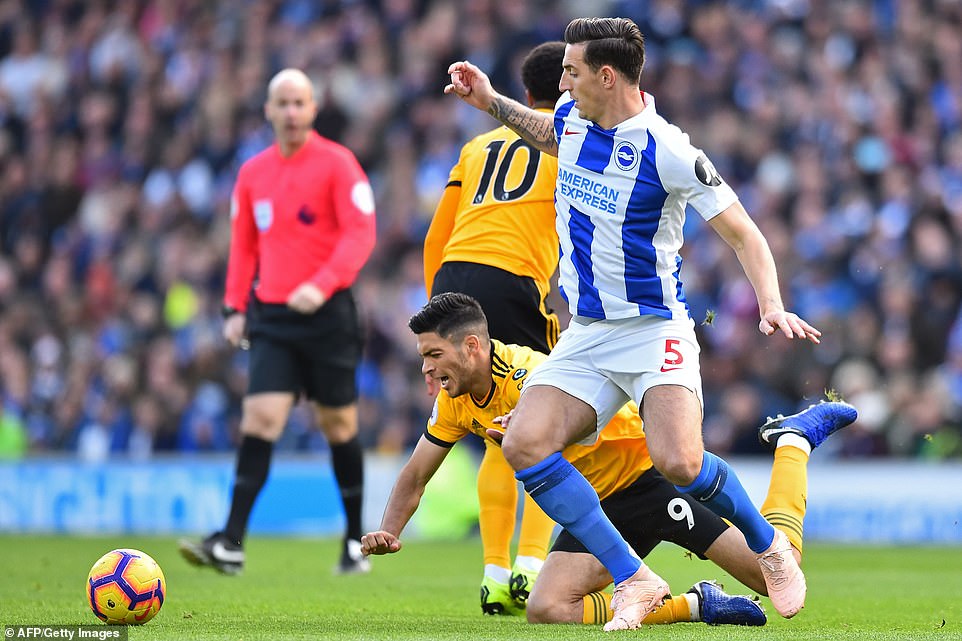 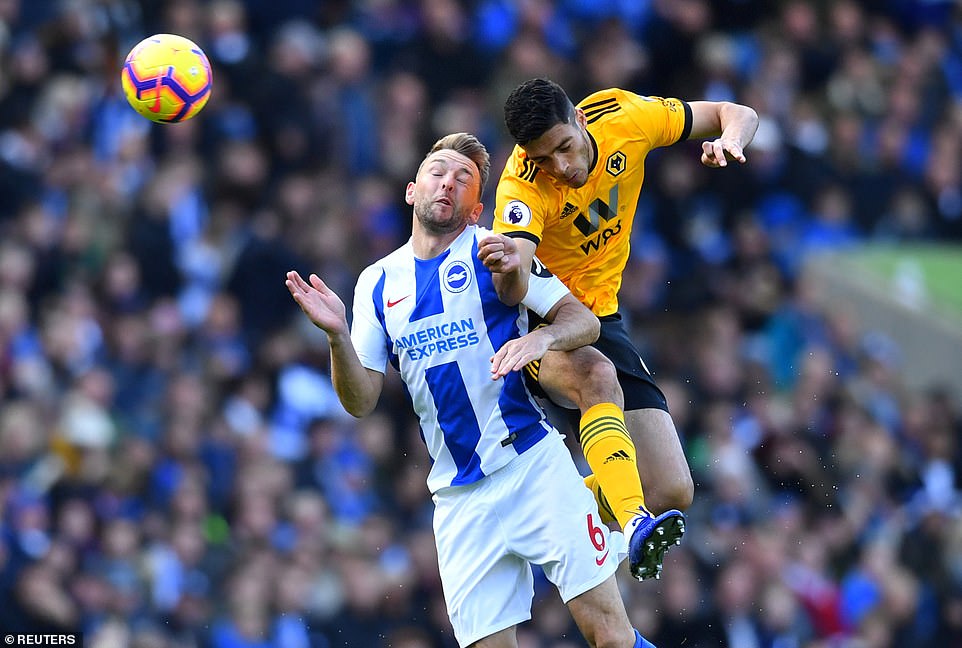 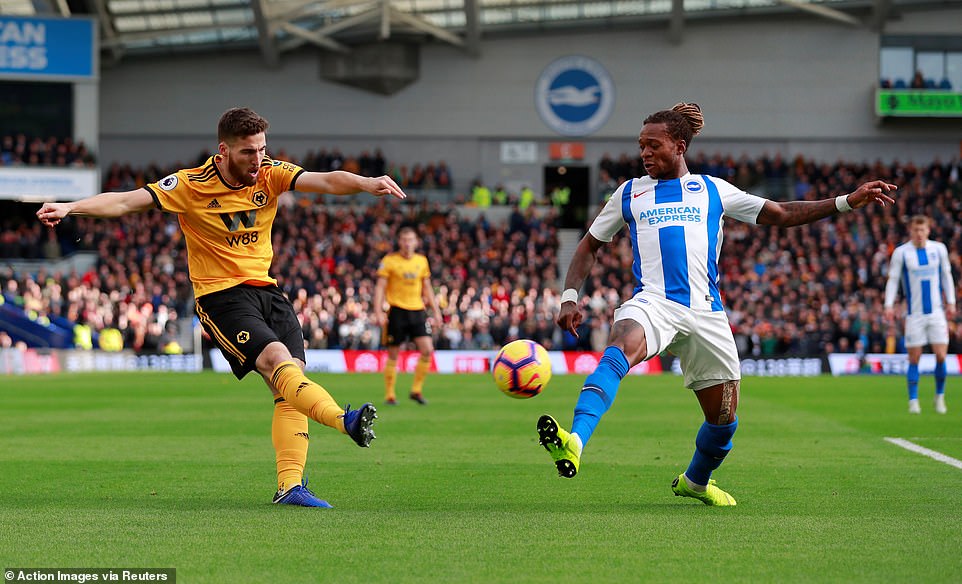 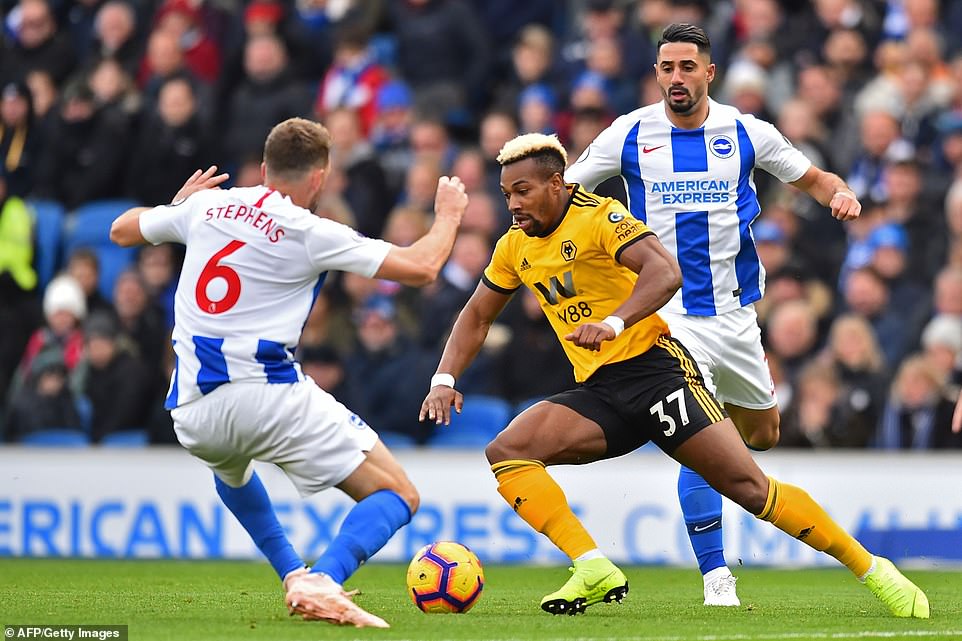 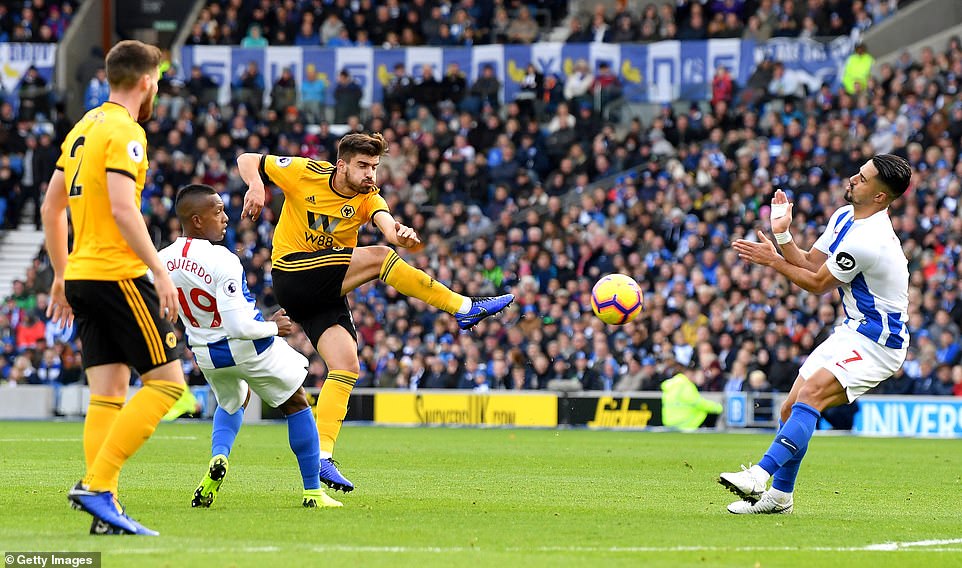 Only Leicester and Tottenham have beaten Chris Hughton’s side on their own turf since late January – and they are particularly difficult to destabilise once they have a lead to protect. This was Brighton’s third consecutive 1-0 victory and it was born out of organisation and desire.

While Brighton’s forward play was sluggish and lacking coherence, Wolves created the better first-half opportunities. Indeed, the visitors should have taken the lead when Matt Doherty came inside, slid the ball into Raul Jimenez, whose exquisite backheel saw Doherty raiding into the penalty area.

The wing-back had time and space, but coaxed his left-footed strike wide of the post. Wolves continued to threaten and promised to unlock the defence through Ruben Neves’ sliderule pass but Doherty was this time beaten to the ball by Mat Ryan. 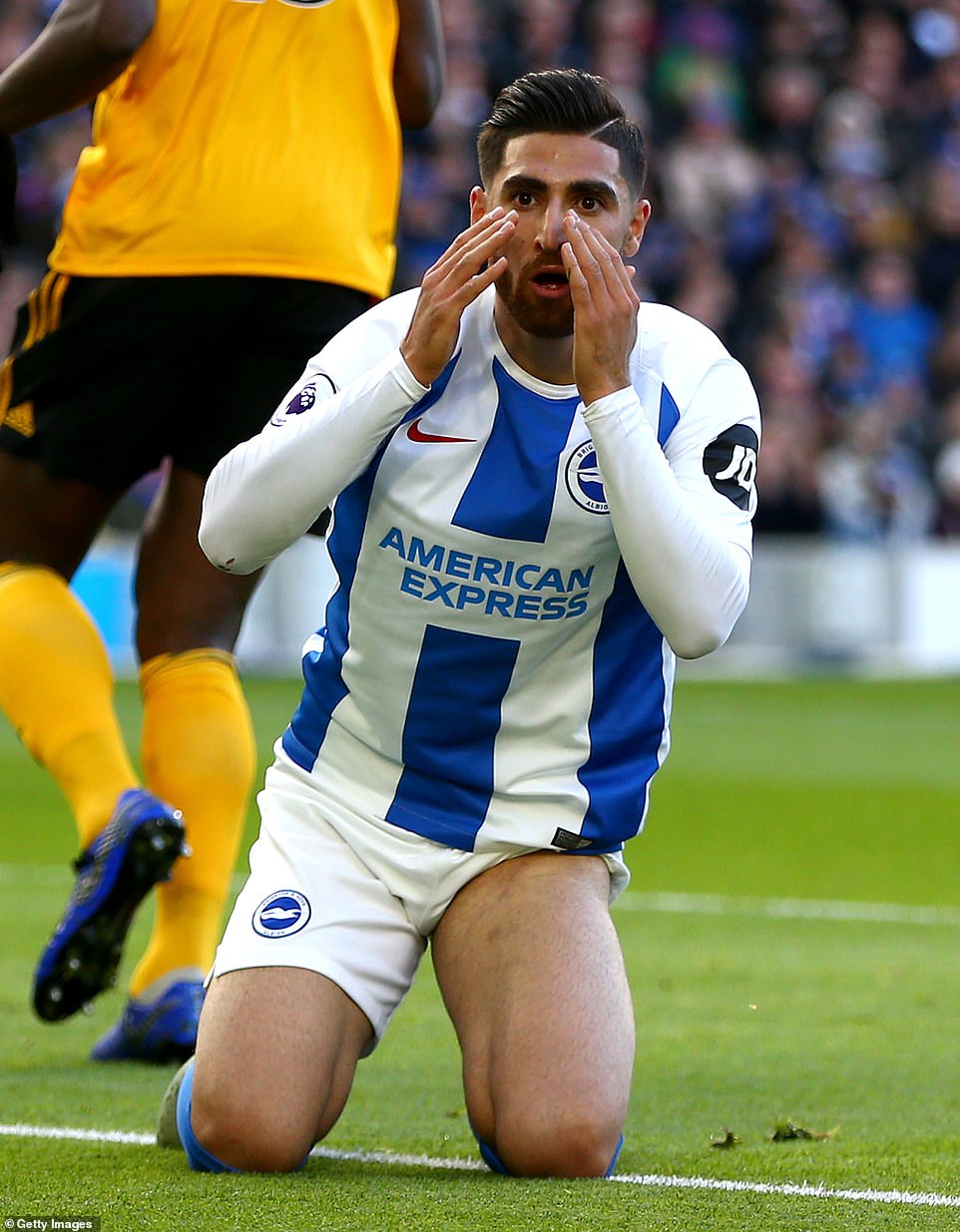 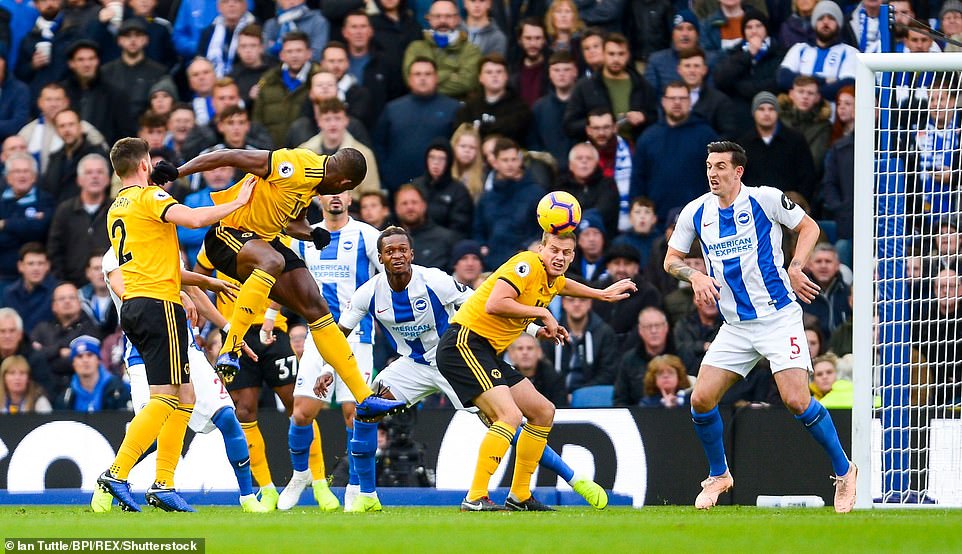 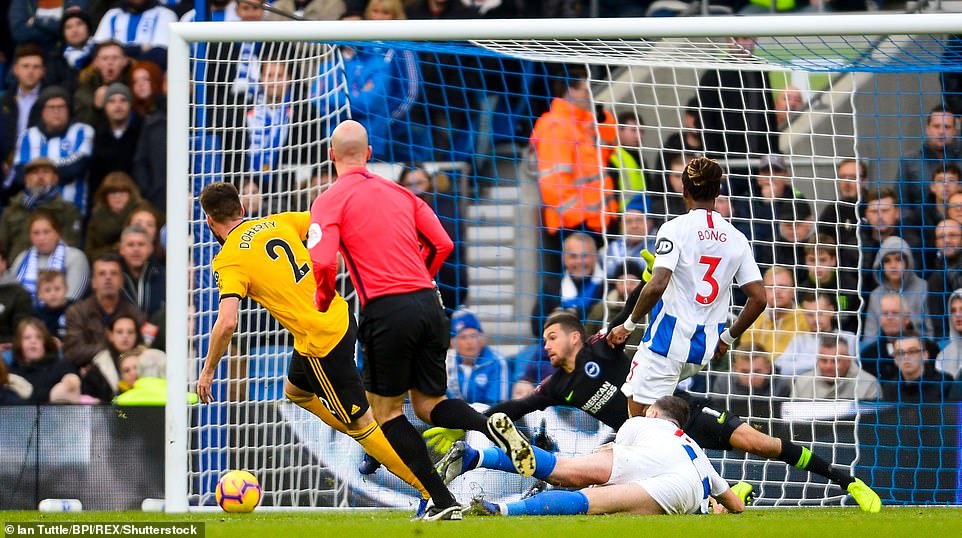 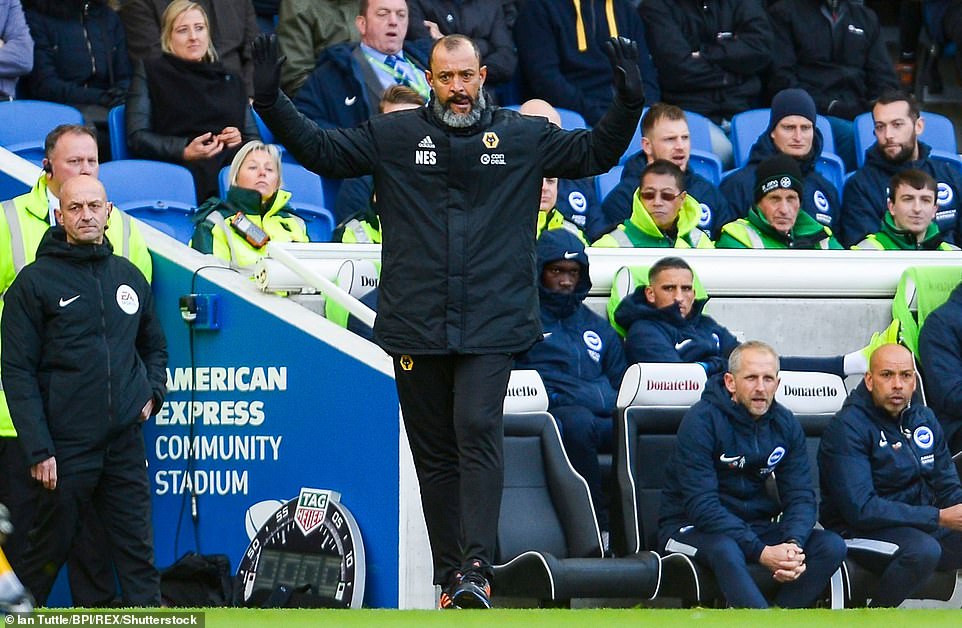 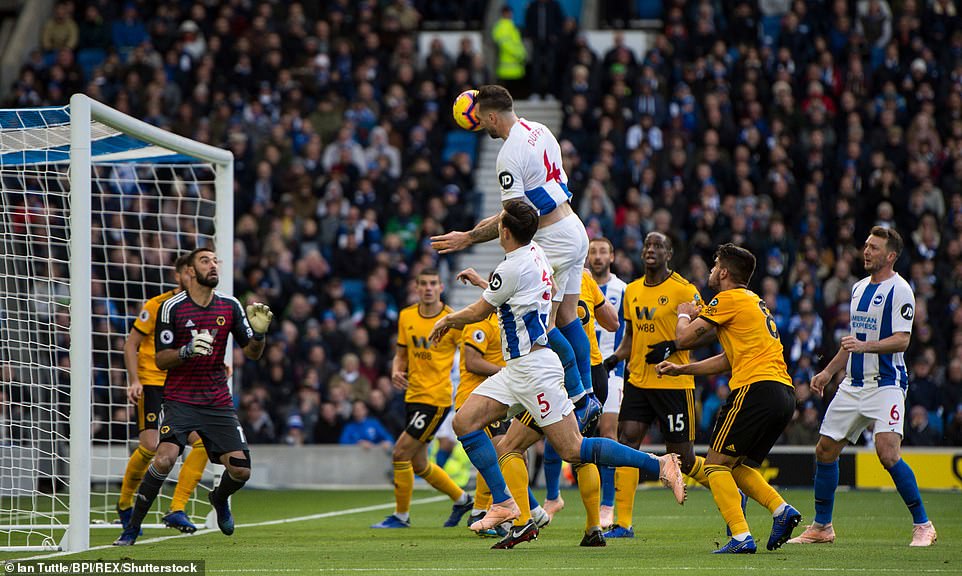 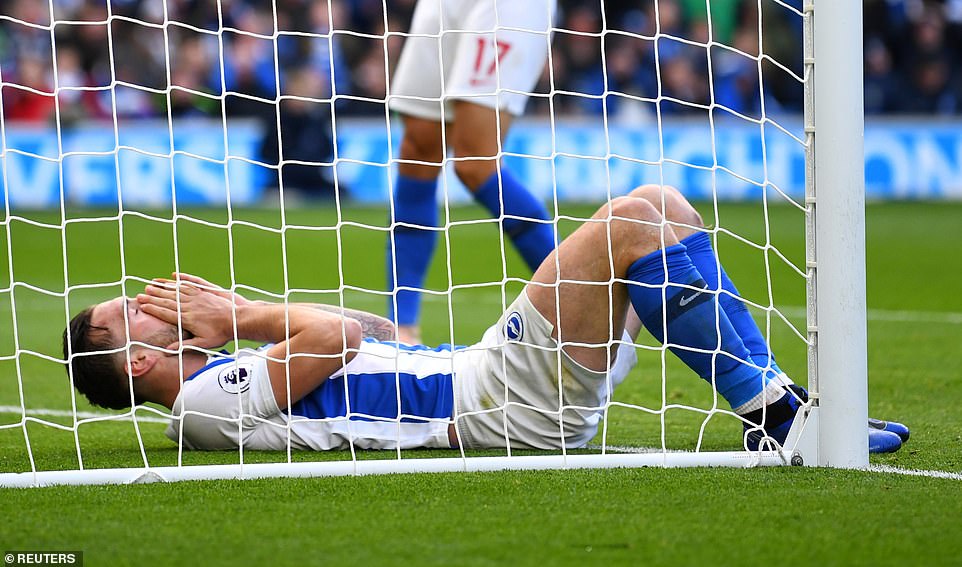 Brighton’s doggedness is relentless, summed up when their two most forward-thinking players in Murray and Jose Izquierdo scrapped by their own corner flag to earn a corner.

Yet Brighton were outplayed for long periods of this game by a Wolves team who continue to impress. Santo’s team do not resemble a promoted side, either in their urgency to recoup possession or their quality in dictating play. Conor Coady built play majestically from his centre-half position, while Ruben Neves and Joao Moutinho controlled the midfield. If there is a flaw in this Wolves side, it is their inability to apply the finishing touch.

Wolves have now had 132 shots this season and scored only nine goals in 10 games and this threatens to be their undoing. 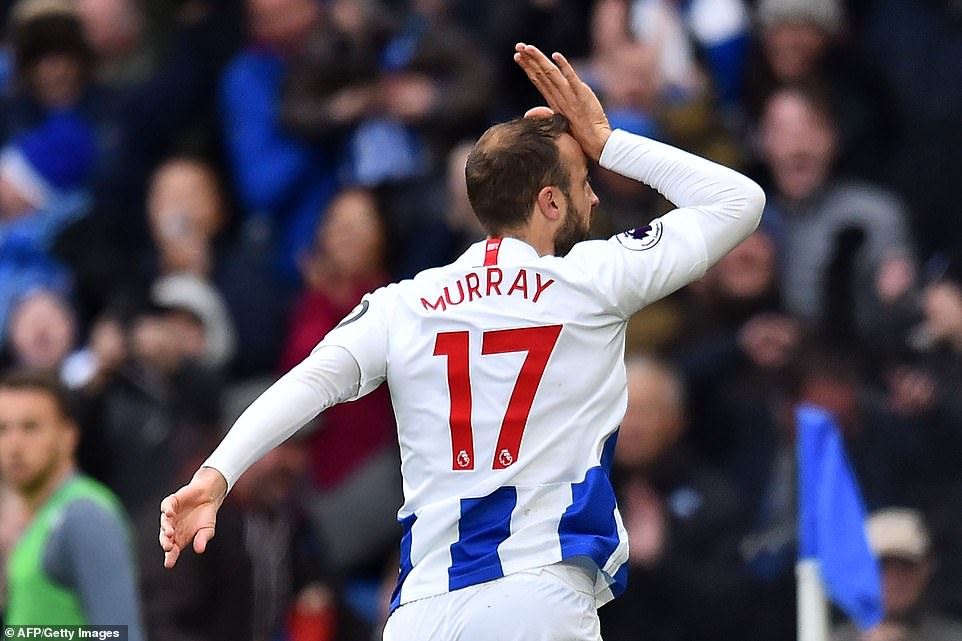 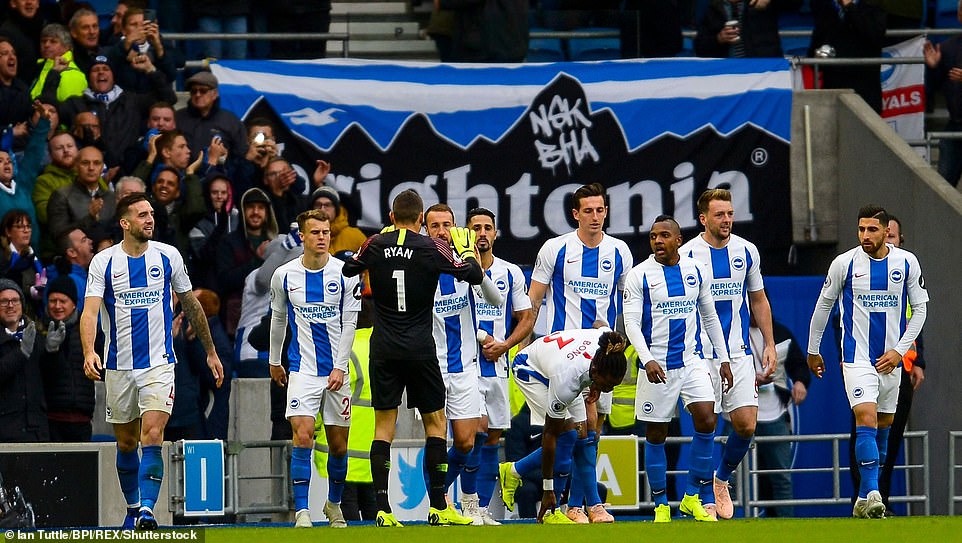 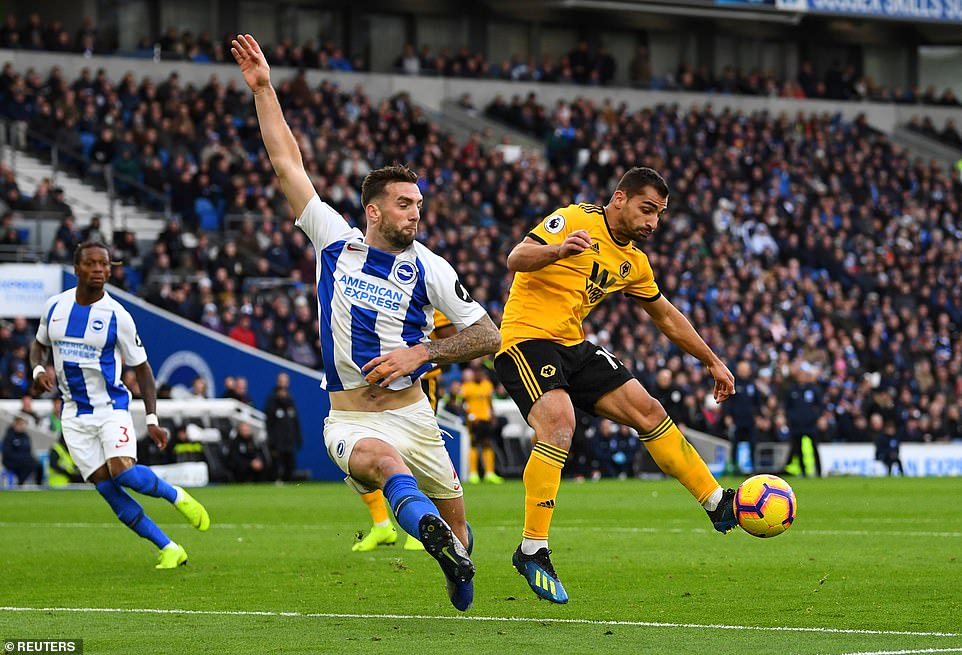 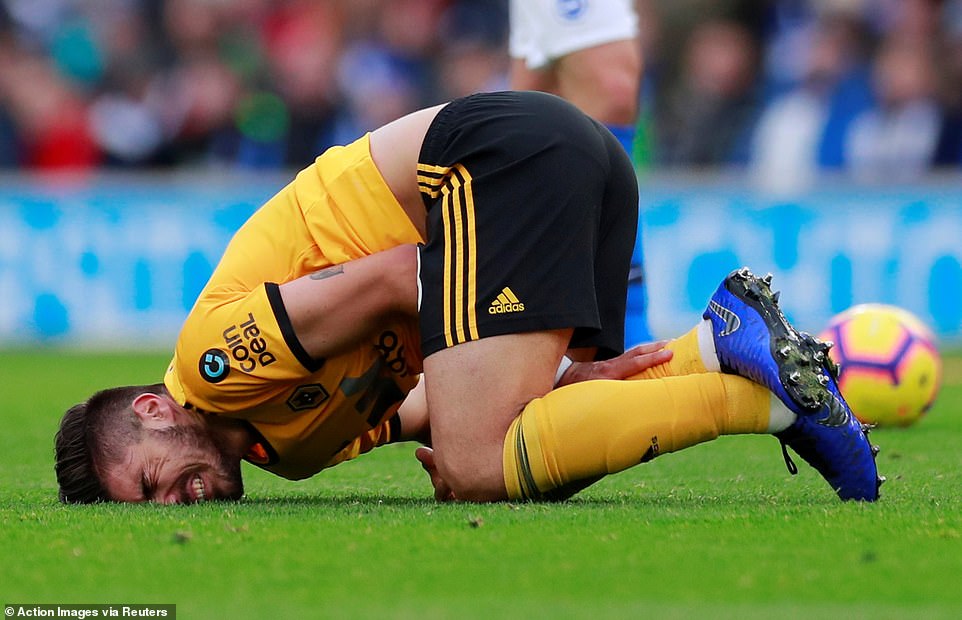 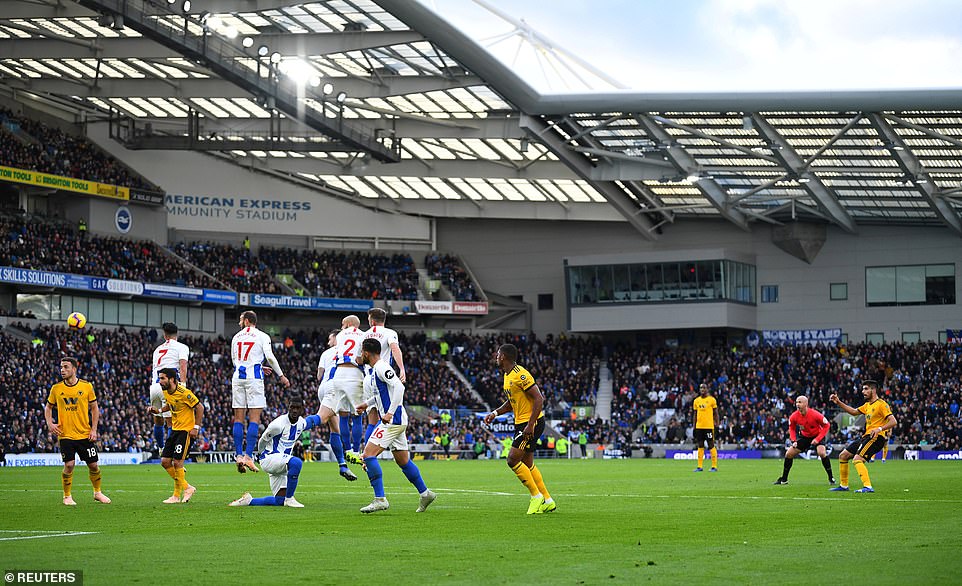 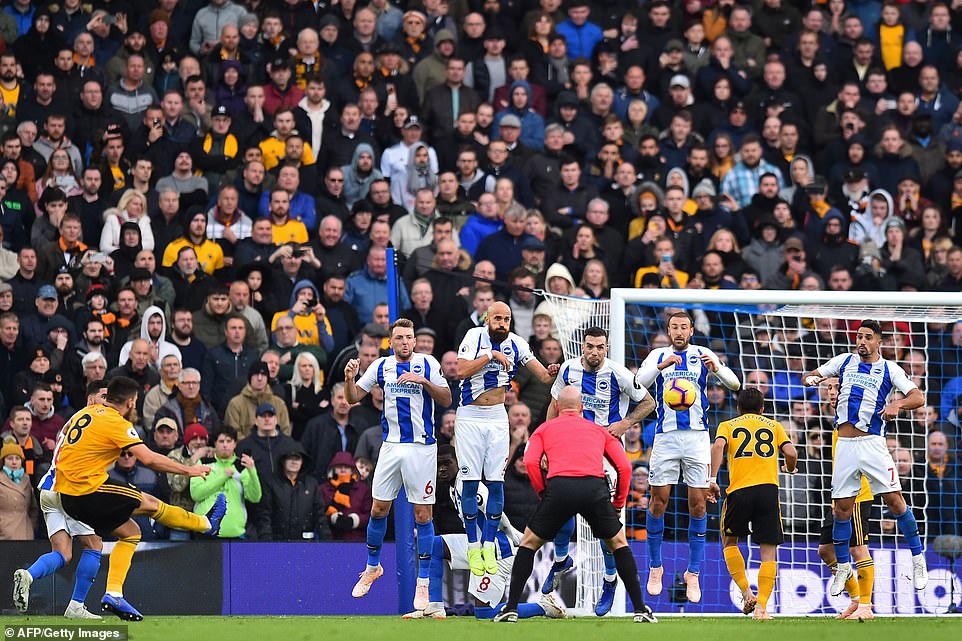 In truth, they could barely have done more to score here. In the dying embers of injury time, Ryan made one of the outstanding saves of the season, sticking out a wrist to deny Ryan Bennett’s high-speed strike from pointblank range.

As Wolves chased the game, Brighton’s resilience only intensified. Shane Duffy and Lewis Dunk were imperious once more, marshalling their backline with authority and steel. Dunk threw a head out to divert Neves’ goalbound free-kick wide and goalkeeper Mat Ryan saved well when Doherty and then Neves struck fine efforts from distance.

They were aided, too, by Wolves profligacy, as Doherty met Cavaleiro’s clipped cross on the run but stabbed wide of goal. Jota then skipped into the box, evading two challenges but his effort was saved once more by the robust Ryan.