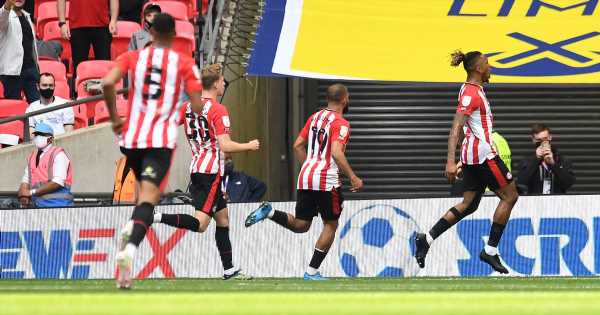 Brentford are into the Premier League for the first time in the club's history after beating Swansea in the Championship play-offs at Wembley.

The west London side, who fell at the same point to Fulham last season, made it to the top through an Ivan Toney penalty and Emiliano Marcondes strike.

It marks a breakthrough for the Bees, who have been consistently touted for promotion since their return to the second division in 2014/15.

And they were given a helping hand by Swansea goalkeeper Freddie Woodman, bringing down Bryan Mbeumo in the penalty area.

It was down to Toney to convert from the penalty, which the forward – who broke the goal-scoring record for one campaign with 31 goals – converted.

And the lead was doubled 10 minutes later when Marcondes finished off a swift counter-attack on an open Swans net.

While the second half remained goalless, the Welsh side never threatened David Raya's goal.

But their chances of a comeback went to nearly zero when Jay Fulton was shown a red card for his clumsy challenge on Mathias Jenssen.

Under manager Thomas Frank, Brentford from 11th in the 2018/19 struggle to third the following year, beating Swansea before losing 2-1 to Fulham at Wembley.

But they enjoyed a very strong 2020/21 campaign, losing just seven of their Championship games to finish third.

They remained unbeaten in all but one their fixtures against the Premier League's relegated side, just losing to champions Norwich in March.

It put them up against Bournemouth in the play-off semi-finals, making a disastrous start as they lost the first leg 1-0 on the south coast.

Going behind at the Brentford Community Stadium again to the Dutchman, Frank inspired them to a 3-2 aggregate comeback before beating Swansea.

Brenford will join league winners Norwich and second-placed Watford, who finished four points ahead of the Londoners.

While it is their first time in the Premier League, it marks a return to top-flight English football 64 years after being relegated the season after World War II.

Having been a top team for four seasons before the war, they fell to the fourth tier over 24 seasons.

After a long time jumping between divisions, they went from 14th in League Two 13 years ago to reaching the top flight again.

READ MORE:Brentford star talks Premier League dream on TV while getting a haircut