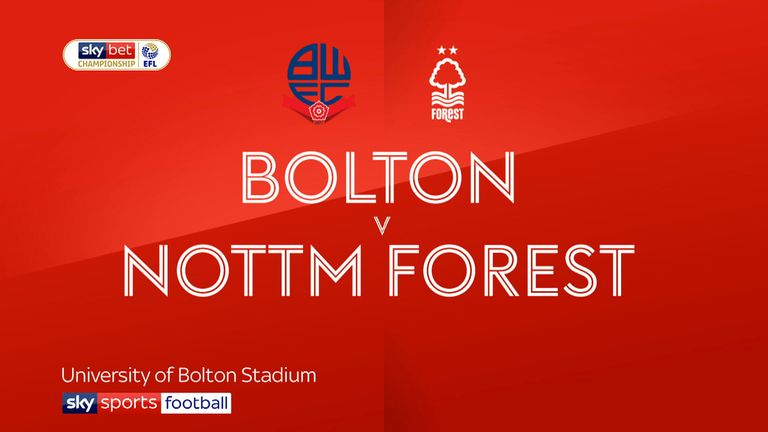 Lewis Grabban scored twice and missed a penalty in the second half as Nottingham Forest gained a first away win at Bolton for 28 years.

Joe Lolley put Aitor Karanka’s side on the road to an impressive 3-0 Championship success before Grabban took over in the second half.

His first spot kick was saved by Bolton keeper Ben Alnwick but he then doubled Forest’s advantage before wrapping up three points with his second penalty.

In contrast, Bolton produced only a single shot on target in the entire 90 minutes as they failed to win for a fifth successive game.

Brian Clough was the last Forest boss to mastermind a win on Wanderers territory with a 5-2 League Cup success in 1991.

But that 10-game winless run came to end in fine style as the visitors moved within touching distance of the play-off zone.

Forest’s only disappointment from a dominant first half was they did not add to Lolley’s spectacular opener. The visitors bossed possession for the first half hour but could not create more chances until just before the break.

Again, it was Lolley who had the opening but this time Alnwick saved the Forest man’s right foot effort down by his near post.

Wanderers, who began the game as the side with the fewest shots in the Championship, went some way to improving that dismal statistic. However, Yanic Wildschut (twice) and Josh Magennis did not get close to troubling Costel Pantilimon in the away goal.

Lolley’s goal came from a Wanderers throw in 70 metres up field. A rapid four-on-four break, started by the scorer, crated the opening. And the former Huddersfield man who finished magnificently with a left foot shot high into Alnwick’s net.

Bolton boss Phil Parkinson made a change at the start of the second half, bringing on veteran striker Clayton Donaldson for ineffective Wildschut.

And while Brighton started brightly, forcing three corners in quick succession, they still could not work Pantilimon. Forest should then have doubled their advantage.

Alnwick saved initially from Gil Dias’ shot from the edge of the area, pushing the ball out into space. As Grabban hunted the rebound he went down under Mark Little’s challenge. Grabban took responsibility for the penalty but his low right foot shot was pushed aside by Alnwick.

Bolton’s overworked goalkeeper then saved from Lolley before Grabban put Forest in control. This time Joao Carvalho was the provider with a superb ball into Grabban’s feet. The Forest forward looked to have taken the ball too wide but he produced an angled right foot shot into the bottom corner of the net after 64 minutes.

Forest were not finished and seven minutes from time, after Grabban was tripped by Alnwick, the same player held his nerve to fire right footed into the net.