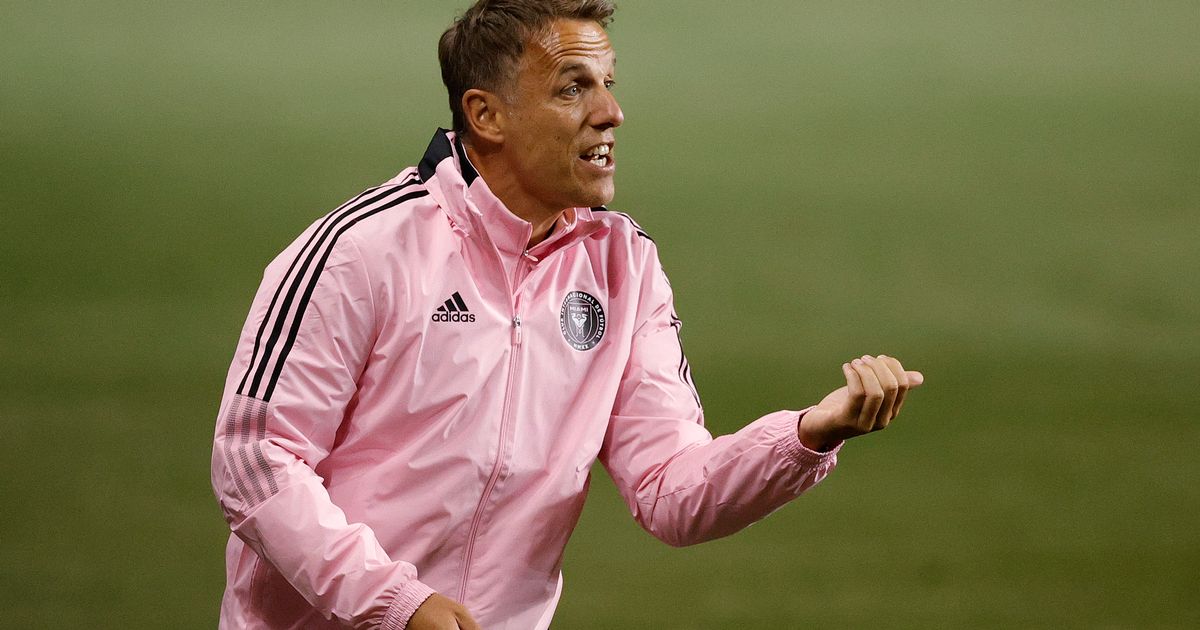 If there was ever a reason needed to prove why friends and work should never mix, the dilemma David Beckham has on his hands with Phil Neville is a timely reminder.

Amid accusations that Inter Miami had hired the former Manchester United and Everton player without a proper interview process, there was already pressure from the outside.

It caused Beckham to fiercely defend his appointment and insist the MLS franchise did not hire Neville simply because the pair were long-time friends.

But after losing six games on the bounce, including a thumping 5-0 defeat at the hands of New England Revolution on Wednesday, Miami are rock-bottom out of the entire 27-team MLS division. The scrutiny has increased on the 44-year-old and Neville’s position looks increasingly untenable, with several US-based coaches being linked with the role.

Alone in an unfamiliar country, it feels like Neville could use a friend right now. Only, the man he would probably turn to for advice, Beckham, may be the one forced to yield the axe.

But how did it go wrong so quickly for Neville and Inter Miami, and what can he do to fix things in the United States? Beckham exercised his option to purchase an expansion team in 2014 as part of his agreement when he signed for LA Galaxy from Real Madrid in 2007 — with a view to forming a new MLS franchise in Miami.

Inter Miami entered the league in 2020 alongside Nashville SC. But while the relative minnows from music city impressed in their debut campaign, Inter Miami failed to hit the heights.

Despite the big name signings of Blaise Matuidi and Gonzalo Higuain from Juventus, the club endured a disappointing first season under Diego Alonso, finishing 10th in the Eastern Conference.

They subsequently crashed out of the post-season before the actual play-offs, losing in the play-in round to Nashville, bringing a disappointing end of their debut campaign in professional soccer.

Only a year after their entry into MLS, Inter Miami found themselves in hot water with the league's senior executives after being accused of under-reporting salaries, which is an important aspect of how MLS soccer is run.

"If you're going to cheat, cheat well" declared ex-USA midfielder Stuart Holden. If only Miami had heeded his advice.

It was announced back in March that Major League Soccer had launched an investigation into whether the club had broken the rules when they signed Matuidi, who was a free agent after being released by Juventus.

It was claimed the Frenchman was being paid more than allowed when assigned to the international roster slot and that he should have been classed as a designated player.

"MLS will not make further comment until the completion of its investigation."

Two months on from that announcement, the resulting investigation found that Miami had violated roster designation rules and they were fined a record $2m.

It was also found that the team had wrongly categorised former defender Andres Reyes and also under-reported the salaries of Leandro Gonzalez Pirez, Nicolas Figal and Julian Carranza.

For those offences, Miami's managing owner Jorge Mas was fined $250,000, while Paul McDonough, who was their chief operating officer and sporting director at the time of the violations, has been suspended until the end of the 2022 campaign. Neville was presented to the media in January earlier this year after taking over from Diego Alonso.

His only coaching experience was a mixed three-year spell in charge of the England Women’s national team, where they won the SheBelieves Cup and finished fourth at the Women’s World Cup in 2019.

Beckham was forced to swat away questions about their relationship and insisted Neville had the pedigree required to cope with a job at this level.

“Of course, people are always going to turn around and say, oh, it’s because he’s your friend. It’s nothing to do with him being my friend,” said Beckham, who is Miami’s co-owner and director of soccer operations.

“Our ownership group don’t just employ our friends. We employ the best people, whether it’s on the field, off the field, in our backroom staff, the staff that we have work in our training facility, at the stadium.

“We are running a serious soccer club here. And I think at the end of the day, we hire people that we feel are best suited for the job.” Beckham’s comments were reflected by managing owner, Jorge Mas, who helped set up the day-to-day running of the club for their first season in 2020.

“The fact that he’s David’s friend is a reality and no one runs from that. Actually, we embrace it.” That humiliating defeat to New England has left Miami in a perilous position at the bottom of the Eastern Conference with two wins from 12 matches, despite their heavy investment to strengthen their roster over the past 12 months.

The signings of Higuain and Matuidi — two former Juventus players — were meant to reinvigorate the team. But they have done little to turn around their fortunes.

Higuain, now 33, has been key to Miami’s goal tally this season, with the Argentine responsible for five of their nine goals.

But the former Real Madrid and Juventus star has struggled to repeat the heroics of past European imports such as Zlatan Ibrahimovic and Carlos Vela, scoring only six goals in 19 appearances.

What’s worse for Neville is that the striker limped off injured towards the end of the match on Wednesday night, forcing the head coach to substitute on his brother, Federico.

But injuries are the least of Neville’s problems. His words of encouragement appear to just be platitudes, providing no tangible motivation for the players. On the day of their clash against New England, he was quoted by the Miami Herald telling his players “it’s now or never”. “We have to start climbing the mountain in front of us,” he said. “There is no margin for error. No excuses. It’s now or never for this team. We’ve got to put our foot on the gas.”

On the basis of their last performance and the five games preceding it, they seem to be hurtling towards “never”.

There is no coherent gameplan — and that was reflected in the way Miami were torn apart in an abysmal first-half display against New England, finding themselves 4-0 down at the interval.

MLS has taken huge strides in improving the quality of its matches; it is no longer a league mocked by its European rivals but one that is viewed as a fast-growing, prosperous enterprise.

But Miami’s defending was amateurish, their players bunched together and clumsily failing to make simple clearances from their own box. The consummate ease in which they were picked apart by one of the best sides in the division was palpable.

Neville admits he feels the pressure of Miami’s dismal run, even if he is determined that he retains the backing of Beckham and Mas. "I feel their full support – I always have done," Neville said of Miami's owners. "They don't need to tell me about their concerns because I have the same concerns.

"I've been in football long enough and I know the consequences — that's no problem to me.”

But the reality is that football is a cut-throat business and without results, managers cannot defend themselves.

They face two tough home fixtures against Philadelphia Union and Montreal Impact in the space of a week and a tough conversation may lie ahead for Beckham and Mas if Neville is unable to reverse the slide.