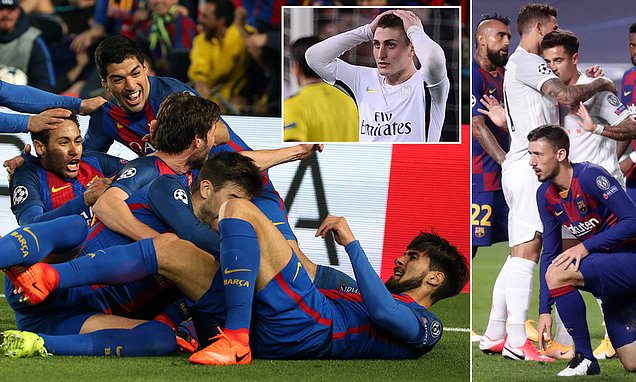 Barcelona’s win over PSG in 2017 remains arguably the GREATEST ever Champions League comeback with Messi, Suarez and Neymar in full flow… now the Spanish giants are in disarray and Koeman must summon that spirit to avoid more Euro heartache

No team in Champions League history had ever turned around a 4-0 first leg defeat.

But then no team in Champions League history had ever had a forward line quite like Lionel Messi, Luis Suarez and Neymar.

The Brazilian was the star, and aided by his Argentine and Uruguayan pals plus local boy Sergi Roberto who got the winner, Barcelona conspired to pull off the greatest comeback ever in the competition.

‘This is a crazy sport,’ said then Barça coach Luis Enrique – his version of Sir Alex Ferguson’s ‘football, bloody hell’. 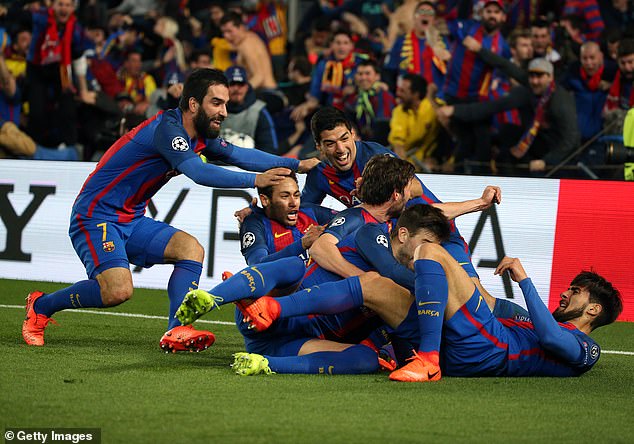 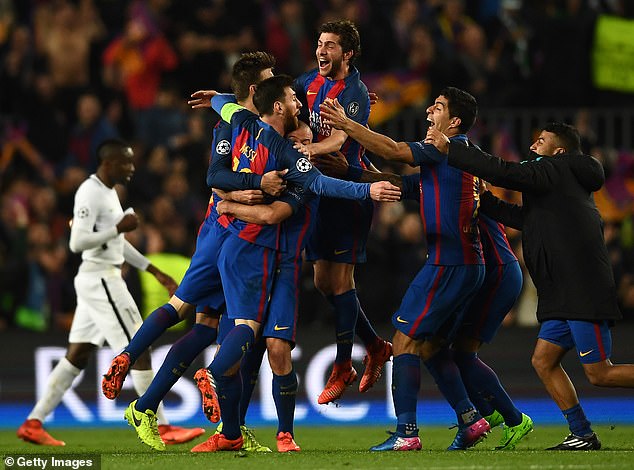 In the 88th minute of the game Barcelona were going out. No one had expected anything less, after the disastrous first leg 4-0 at the Parc des Princes.

Suarez had given them hope with a goal after just three minutes and courtesy of a Layvin Kurzawa own-goal and a Messi penalty it was 3-0 on the night. But when Edinson Cavani scored on 62 minutes the dream was surely dead?

Not so. Not with Neymar on the pitch, against the club that would sign him a few months later for €222million (£198m). He curled a brilliant free-kick past Kevin Trapp to make it 4-1 on 88 minutes and now Barcelona only needed two goals.

Never mind there were only two minutes of normal time left, the Camp Nou’s cry of ‘Yes we can’ which had been silenced by Cavani’s goal was back and the volume was turned up even more when Suarez won a penalty and Neymar buried it.

Neymar set up the crucial sixth goal, floating the ball into the area one last time and picking out Sergio Roberto who had ghosted behind the PSG defence to score. There were 95 minutes on the clock.

Unai Emery grimaced, Barcelona supporters cried in the stands, the home bench invaded the pitch and there was only time for PSG to take the restart and then hear the final whistle. 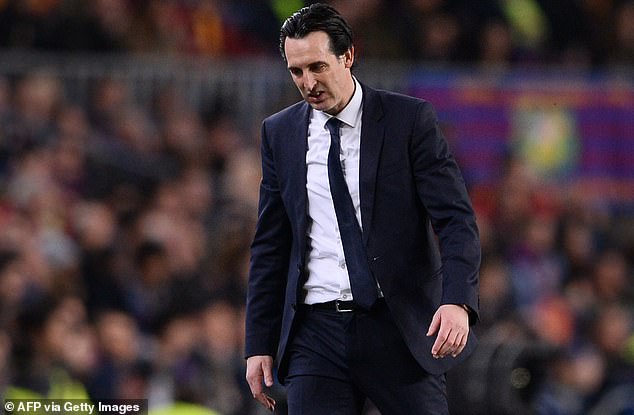 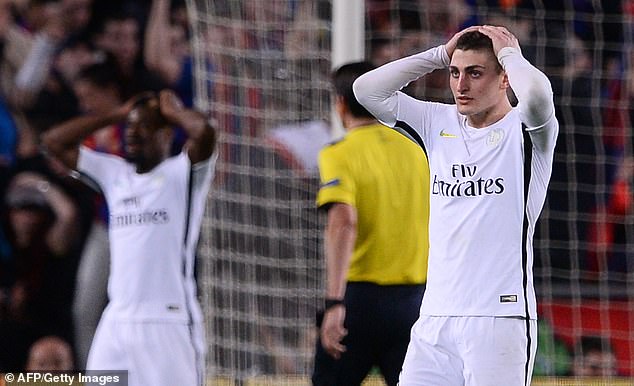 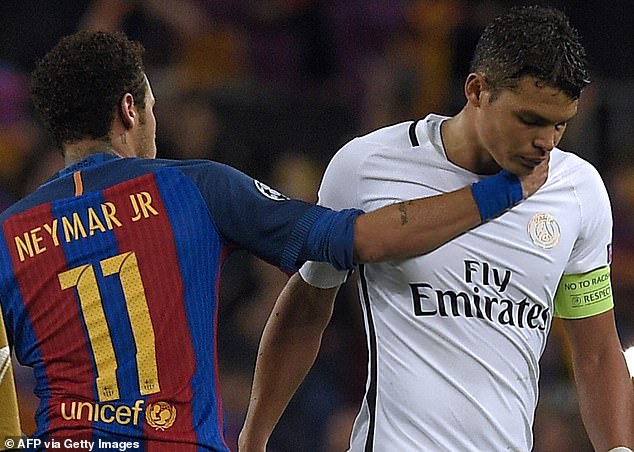 ‘We knew we need six because we thought they would score,’ said Luis Enrique after the game. ‘It was like a horror film at times.’

That was a more apt description of the game from Emery’s perspective; he was never quite forgiven for overseeing the capitulation.

The enduring image from one of the Camp Nou’s most extraordinary nights was of Messi celebrated in a sea of ecstatic Barcelona supporters. It was the picture that appeared on all the front pages the following morning, more because it was an incredible image than because anyone believed this was a miracle made in Messi.

Neymar had done more than anyone to make the impossible possible, for once Messi had been no more than best supporting actor. The use of the Messi picture was a sore point raised a few months later when Neymar left Barcelona and joined PSG.

The story was he, or more likely his entourage, had despaired he had not made the front page after such an incredible display. Barcelona floated through the next few days after the victory.

Supporters exchanged stories about having turned off the television at home when Cavani’s goal went in, only to turn it on again because they heard screams of joy from neighbours who had kept the faith and were still watching. 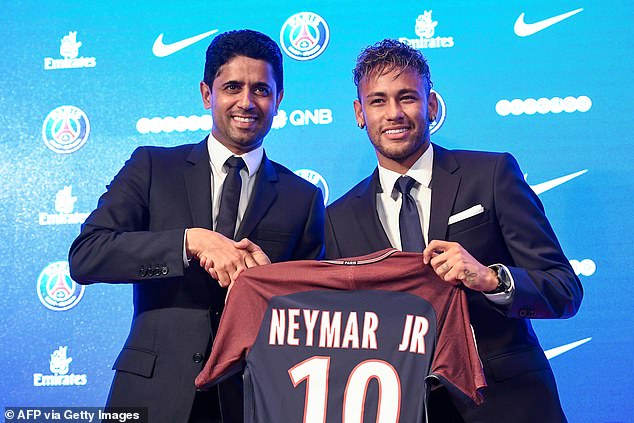 Of course as well as showcasing the genius of Neymar and showing Barcelona had a heart almost as big as that front three’s attacking talent, the two legs had also brought into focus a fragility in the big games.

Maybe Cavani’s goal, and the fact that he hit the post and Marc-Andre ter Stegen had to save from him and Angel Di Maria, could be put down to Barcelona having committed so many forward.

But the four conceded in the first leg were a sign of things to come.

Juventus beat Barcelona 3-0 in the next round that year, knocking them out. And Roma and Liverpool would serve up embarrassing defeats in subsequent seasons.

Last year Bayern Munich put eight past Barça and the club are now deep in debt, still without a president, potentially losing Messi for nothing in the summer, and not expected to win this season’s competition.

But the memories are still fresh enough from that amazing evening. As many as four players who played in the game could even start on Tuesday night.

Maybe Ronald Koeman should play the highlights of the match to his players in the build-up to the rematch.

Where are they now?

The Barcelona team that beat PSG 6-1 in 2017 is very different to the team that will take to the pitch on Tuesday evening.

Sportsmail looks at what happened to the players who played out the incredible second leg.

Marc-Andre ter Stegen: Still Barcelona’s number one. A survivor from the game and a definite starter on Tuesday.

Javier Mascherano: He left Barcelona for China in January 2018, playing for two more years before retiring.

Gerard Pique: Injured since November but possibly poised for a comeback almost as unexpected as the team’s in 2017. He chose not to have surgery on his right knee and had a first training session on Sunday with an eye on at least being in the squad.

Samuel Umtiti: Before the injuries got the better of him he was one of Europe’s best defenders. He is still at the club but not expected to start.

Sergio Busquets: It probably shouldn’t be this way but four years on he is still the best Barça have in his position.

Rafinha: Never managed to hold down a place at Barça and he signed for PSG in October last year. He has made nine league starts this season.

Ivan Rakitic: Now at Sevilla, he scored against Barcelona last week in a 2-0 defeat in the first leg of the Spanish Cup semi-finals.

Andres Iniesta: His clever back-heel that night provoked the second goal. Still at Vissel Kobe who he joined in 2019.

Neymar: Joined PSG just months after knocking them out. Yet to win the Champions League or the Ballon d’Or since leaving, and is ruled out by injury.

Lionel Messi: He played league game number 505 at the weekend, equaling Xavi’s club record. Still unplayable but now just four months away from the end of his contract.

Sergi Roberto: Supersub on the night, he has since become first choice right back but currently out injured.

Marquinhos: Still at PSG and with 15 starts this season.

Layvin Kurzawa: Also still at PSG with 15 starts so far this campaign.

Lucas Moura: Joined Spurs in January 2018 and scored the hat-trick that sent them into the 2019 UCL final.

Marco Verratti: Once constantly linked with a move to Barcelona, the midfielder should start on Tuesday for PSG.

Julian Draxler: Still at PSG with 13 starts in Ligue 1 this season.

Edinson Cavani: At the time of the 2017 game no striker in Europe was as prolific as Cavani. He could have scored a hat-trick on the night. The one goal he did score was not enough. Now at Manchester United where he has six Premier League goals in eight starts.