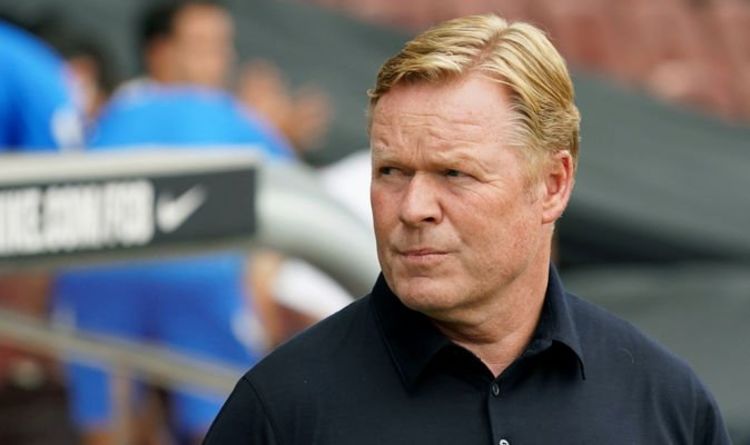 Emerson, who joins as one of Tottenham’s marquee signings, signed for a fee of £26million to mark a captivating transfer window for the Lilywhites.

With Serge Aurier unhappy with his game-time, Royal was targeted as a consistent marauding wing-back – something Aurier couldn’t offer to new boss Nuno.

And with a deal for the Brazilian being completed just hours before the deadline, it represents a strong bit of business for the north London side.

However Barcelona fans may be less than happy with the decision, which Koeman has tried to validate in a lengthy interview with the press.

Speaking to SPORT, the Dutchman alluded to the Blaugrana’s precarious financial position by claiming it was the best decision possible to sell him.

JUST IN: Rice in England training show why he would fit at Chelsea and Man Utd

“An example that I want to help the club has been the decision made with Emerson,” Koeman said.

“I told the club that if it is important money that can be earned, it can be sold to Emerson because we have Dest, Mingueza and even Sergi Roberto.

“I was not intransigent in that sense, because I could have told you: “No, from here it does not move.

“There are undoubtedly more positive than negative things.”

Dest’s arrival to Catalonia last summer and Roberto’s continued stay at the club he has been with throughout his career has meant that Emerson would have found it tough to start games.

Arsenal ‘asking for trouble’ after links to Tottenham flop

With Mingueza turning 22 over the summer and Dest being just 20, there is a clear emphasis on youth in the ranks at the Nou Camp – something Emerson would have to fight against.

However the Brazilian felt as though he was forced out of the club, claiming he could have helped in a lot of ways.

“It hurts me to go out like this because I knew that in my best form I could bring a lot of joy to the fans,” he told Spanish outlet Marca.

“I leave with the feeling that one day I will return to give that joy to the fans.

“Used is not the word, but it did hurt me.

“They could have done things differently. There were better ways to fix things.”

The Brazilian has yet to play in the Premier League thus far due to the international weekend currently taking place.

However, that may change in Spurs’ away fixture against Crystal Palace on Saturday lunch-time.